Of genes and podcasting

By Jan Read
This article was written for the Winter 2021 issue of Vestigo, and has been published in advance. 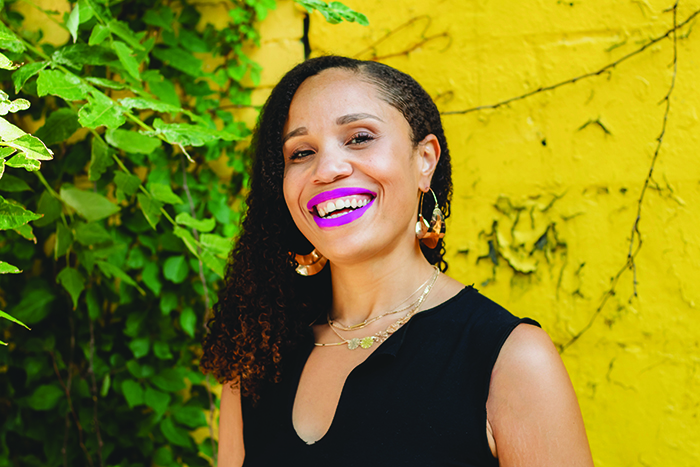 Janina Jeff, PhD’12, was the first African American to earn a doctorate in human genetics at Vanderbilt University. A sought-after speaker, she keeps a dual focus on research and education. In 2020, she was the youngest-ever and first African American winner of the American Society of Human Genetics Advocacy Award, and her “In Those Genes” podcast won the Third Coast/Richard H. Driehaus Foundation Competition International Impact award.

What is your current job?

I’m a senior bioinformatics scientist at Illumina, the leader in next-generation sequencing technology.

Your career focuses on the genomics of certain populations. Why is it important to bring the idea of diversity into the field of human genetics?

No one wins when there is a lack of diversity in research. As a population geneticist, I design genotyping technology that allows us to see how the genetic makeup of populations impacts the course of a disease or infection. Genetics is behind Vanderbilt’s commitment to personalized medicine: getting the patient the right medicine at the right time.

The challenge is to get more representation in research without introducing more bias and inequity into the system. To do that, we need to address the distrust that exists in the Black community about how research data is gathered and used. One thing we can do is to make sure people understand what participation means and what the benefit is for the individual. It’s a beautiful thing—when people have the education they need, they become empowered to be a collaborator in research as opposed to (it being) a transactional relationship.

I came to Vanderbilt for my Ph.D. supported by the Initiative for Maximizing Student Diversity, an extension of the Interdisciplinary Graduate Program, after I earned my undergrad degree at Spelman College. I did a rotation in human genetics, and that was it—I was hooked. I worked with Dana Crawford and her genetic epidemiology research into diverse populations. She was also my Ph.D. adviser.

Genetics can be complicated for the general public to understand. What do you see as your role in helping educate people?

Teaching has always been a part of who I am. I began teaching by starting a tutoring program in high school. And now I frequently go back and guest lecture at Spelman. I am also a public speaker and recently gave my first TED talk. During my Ph.D. program at Vanderbilt, I taught first-grade science one day a week through the Scientist in the Classroom Partnership Program. That particular experience was so hard because I was deep in the weeds with my research and then had to zoom out and teach 6-year-olds. I had to learn how to make something really complicated accessible.

That’s the idea behind my “In Those Genes” podcast. It’s a hip-hop-inspired podcast that uses genetics to uncover the lost identities of African-descended Americans through the lens of Black culture.

How did you jump from classrooms and a TED talk to podcasts?

In 2018, Spotify launched a boot camp to uplift and amplify voices of women of color. I was one of three women chosen from 18,000 applicants, and that was the launchpad for my podcast.

I wanted to talk about genetics, DNA testing, data privacy and research in a way that was accessible to the Black community, and using Black culture to do this was key.

The podcast launched in late 2019. We were in the middle of producing our season—each episode usually takes a month to put together—when the pandemic hit. At that point, we needed to address all the misinformation going around. We pulled together the “Dat Rona” episode in three days and nights and dropped it on March 19, 2020. The work paid off, and that episode later was a winner in the international 2020 Third Coast/Richard H. Driehaus Foundation Competition!

What’s next on the horizon?

I’ve been thinking about writing a book—a quick read into genetics with my personal story woven in. I also want to keep the podcast going and growing. To date, we’ve got more than 36,000 listeners, and I’d like that to be more like half a million. I’m finding my newfound secondary career in science journalism very rewarding because I am able to provide space for Black scientists and talk about topics we’ve never talked about before.