To view the speaker presentations from the symposium, please visit the School of Medicine media site. 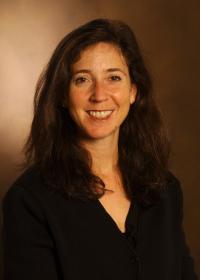 Dr. Shari Barkin, Professor of Pediatrics and the William K. Warren Foundation Chair, directs Pediatric Obesity Research and the Division of General Pediatrics in the Department of Pediatrics at Vanderbilt University Medical Center. She earned her undergraduate degree at Duke University, her medical degree at University of Cincinnati, and completed her pediatrics residency at Children's Hospital of Los Angeles. She was selected as a UCLA Robert Wood Johnson Clinical Scholar and completed a fellowship in Health Services Research.

Funded by NHLBI, NICHD, the Robert Wood Johnson Foundation, and the State of Tennessee, Dr. Barkin conducts family-based community centered interventions to change health behaviors in parent-child dyads and measurably improve child health outcomes. Currently her team is focused on improving healthy growth trajectories in childhood. The behavioral interventions her team conducts applies the ecologic model that considers the child in the context of their family, and the family in the context of their community to prevent childhood obesity. A theme of these scientific inquiries is the examination of the interaction between behavior, environment, and genetics in young children at critical windows of development. She is funded by the National Heart Lung and Blood Institute (NHLBI) and the National Institute of Child Health and Human Development (NICHD) to conduct a 7 year randomized controlled trial to prevent childhood obesity. She serves as the Chair of the NIH Childhood Obesity Prevention and Treatment Research Consortium and the National Academy of Sciences Board of Children, Youth, and Families. 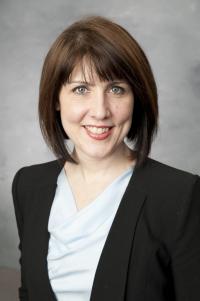 Dr. Bauman-Carnegie has a Ph.D. in Pharmacology from Vanderbilt University and did her Post-doctoral training at the Oregon Health Sciences University (OHSU) where her research focused on intracellular signaling pathways regulating heart cell growth and heart disease.

Following her postdoctoral training, she continued on at OHSU’s Casey Eye Institute as a Research Assistant Professor in Ophthalmology and Genetics and the Research Administrator for the Oregon Retinal Degeneration Center.  There, she used her scientific background to monitor the progression of the scientific research programs to ensure a smooth transition from the laboratory bench, to clinical trials and to help develop the Translational Clinical Trial Center Reading Center, which focuses on preclinical evaluation, clinical trial design and endpoint development of outcome measurements for clinical trials on retinal disorders.  She joined UIC in 2009, and uses her combined scientific and administrative experience to contribute to the clinical-translational science agenda at UIC.

Dr. Bauman-Carnegie is an active member of the UIC Academic Professional Advisory Committee and the Association for Clinical and Translational Science. 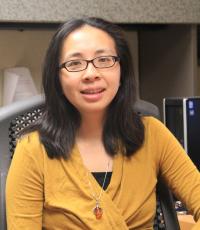 Dr. Cheng obtained her Ph.D. in 2002 at Vanderbilt University, under the mentorship of Jin Chen, M.D., Ph.D.  She completed her postdoctoral fellowship in the laboratory of Harold L. Moses, studying the role of TGF-beta signaling in fibroblasts during breast cancer progression.  Her work was funded by an NRSA award (F32, NCI), and was published in Cancer Research, Oncogene, and Molecular Cancer Research. During that time, she discovered that TGF-beta signaling was an important regulator of chemokine expression. These findings led to K99/R00 award (NCI) and transition to a faculty position at the University of Kansas Medical Center in 2008.  Currently, Dr. Cheng is working on several projects (funded by the NCI, Susan G. Komen Foundation, and American Cancer Society) to understand how chemokine signaling regulates early and late stage breast cancer progression. Her long-term research goals are to understand how changes in the breast tumor microenvironment facilitate breast cancer progression in order to contribute to the improved detection of breast cancer and more effective treatments.

Dr. Morrell-Falvey received her Ph.D. in Genetics from Purdue University in 1997. During her graduate and post-graduate work, she studied the molecular mechanisms and regulation of cell division in fungal systems (e.g. fission yeast) using a combination of genetic, molecular, biochemical, and imaging techniques. Dr. Morrell-Falvey joined the staff of Oak Ridge National Laboratory in 2004 and is currently a scientist in the Biological and Nanoscale Sciences group. Her research focuses on using imaging techniques to investigate biological systems at multiple scales, from macromolecular interactions and cellular signaling to community structure. A main topic of her recent work is investigating plant-microbe interactions using molecular genetics, live cell imaging methods, and fluorescence microscopy.

Dr. Hardy received her Ph.D. in Pharmacology from Vanderbilt University in 2011 after receiving her B.S. in Chemistry from Jackson State University in Jackson, MS. During her graduate studies at Vanderbilt, she conducted research in the laboratories of Drs. Jack Roberts and Jason Morrow in the Division of Clinical Pharmacology. Her work focused on utilizing mass spectrometry to study the formation and metabolism of biologically active lipids (eicosanoids) derived from arachidonic acid. In 2011, Dr. Hardy was awarded the UNCF-Merck Postdoctoral Science Research Fellowship to conduct research at the University of Washington School of Pharmacy in the Department of Medicinal Chemistry under the mentorship of Drs. Allan Rettie and Sidney Nelson. During her postdoctoral training, she studied drug metabolism and mechanistic toxicology. Her research focused on identifying the metabolic pathways involved in the formation of chemically reactive metabolites from a targeted breast cancer drug that is associated with rare but severe liver toxicity.

In the fall of 2013, Dr. Hardy joined the faculty in the Department of Pharmaceutical Sciences at Lipscomb University College of Pharmacy, where she is developing a research laboratory to investigate the biochemical and cellular mechanisms of drug-induced liver injury. Her research interests include characterizing the role of drug metabolism in the initiation of liver injury caused by targeted anti-cancer drugs. She was recently awarded a New Investigator Award (NIA) from the American Association of Colleges of Pharmacy (AACP) to support her research in this area. 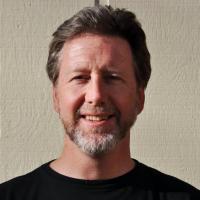 Dr. Lyons is the Director of the Wake Forest Animal Welfare Program and the Institutional Animal Care and Use Committee. As Wake Forest’s first full time director in this role, he partnered with leadership to advance an overall quality assurance program and create a paperless committee review process. He also coauthored the training tool, An IACUC member’s Guide to Animal Facility Inspections, housed at the NIH’s, Office of Research Integrity. He received his B.S. from Penn State University in Molecular & Cellular Biology, and then completed his Ph.D. in Behavioral Neuroscience at Boston University. After a post-doctoral fellowship at Harvard Medical School, he conducted research investigating the neural basis of substance abuse in animals at the Wake Forest School of Medicine. In 2001, he left the laboratory and became an administrator in the Office of Research there. Between 2001 and 2007, he wore different hats as a grants administrator, interim director of industry relations, and strategic planner, until taking on his current role in animal research oversight. 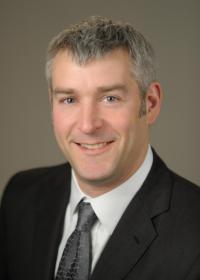 In his role as Senior Advisor for Translational Research at the National Eye Institute, Dr. McMahon facilitates translational research activities and participates in trans-agency initiatives.  He is also responsible for identifying emerging opportunities to advance small molecules, gene- and cell-based therapies, medical devices, and other novel therapeutics through public-private partnering with the pharmaceutical and biotechnology industries. Dr. McMahon completed his graduate studies in retinal structure, function, and visual perception at the University of California, San Diego and performed postdoctoral research in primate retinal physiology at the University of Washington.  He then served as Senior Principal Scientist for Second Sight Medical Products for five years. In 2009, Dr. McMahon moved to Capitol Hill as a AAAS Science and Technology Policy Fellow for the Senate Committee on Commerce, Science, and Transportation. He then served as professional staff on the House Science and Technology Committee, where he oversaw innovation, manufacturing, technology transfer, and bioscience policy. 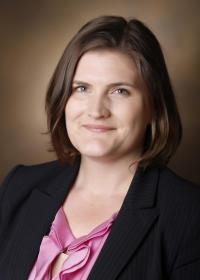 Dr. Micheel is a research assistant professor of medicine at Vanderbilt University. She joined the Vanderbilt-Ingram Cancer Center in December 2011 as managing editor for MyCancerGenome.org. Prior to moving to Nashville, Dr. Micheel spent four years at the Institute of Medicine (IOM) in Washington, DC, beginning in January 2008 as a Mirzayan Science and Technology Policy Graduate Fellow in the National Cancer Policy Forum (NCPF) and Board on Health Care Services. She was the study director for the studies Evolution of Translational Omics and Evaluation of Biomarkers and Surrogate Endpoints in Chronic Disease. Prior to her work at the IOM, Dr. Micheel held a postdoctoral position at the IBM Almaden Research Center in San Jose, Calif., where she studied interactions between biomolecules, such as DNA and antibodies, and nanomaterials. She completed her Ph.D. in chemistry from the University of California, Berkeley, with the support of a Howard Hughes Medical Institute Predoctoral Fellowship. Her research was focused on nanobioscience. 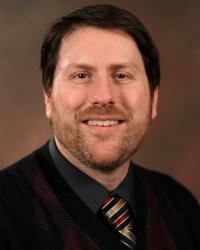 Dr. Olivey received his undergraduate degree in microbiology summa cum laude from North Carolina State University. He then attended Vanderbilt University, studying growth factor regulation of heart and blood vessel development in the laboratory of Joey V. Barnett, Ph.D. After earning the Ph.D. in Pharmacology in 2003, Dr. Olivey moved to the University of Chicago and worked as a postdoctoral fellow in the laboratory of Eric Svensson, M.D., Ph.D. Dr. Olivey continued his research into cardiovascular development, focusing on the role of the transcriptional co-epressor FOG‐2 during coronary vessel formation. In 2010, Dr. Olivey joined the faculty of Indiana University Northwest as Assistant Professor of Biology. IU Northwest is a regional campus of Indiana University that serves a diverse student population, including many who are the first in their families to have attended college. Dr. Olivey continues to perform research with undergraduate students on heart and blood vessel development. In addition to publishing manuscripts of his original research, Dr. Olivey has published reviews on coronary artery development and signaling. Dr. Olivey teaches courses in general, molecular, and developmental biology and in 2013 was the recipient of the Trustees Teaching Award at IU Northwest. 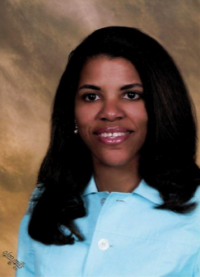 Dr. Michelle Penn-Marshall is the chairperson of the Department of Biological Sciences at Hampton University.  She received her B.A. and M.S. in Biology with a concentration in environmental science from Hampton University. She received her Ph.D. in Community Nutrition from Virginia Tech. As a graduate student at Hampton she received a fellowship from the Environmental Protection Agency to study water quality research. Dr. Penn-Marshall also received grant funding as a graduate student from the Department of Human Nutrition Foods and Exercise at Virginia Tech to study the effects of resistant starch on African Americans at increased risk for type 2 diabetes. Her dissertation received a national award from the American Association of Higher Education Black Caucus.

Dr. Penn-Marshall’s primary research interest includes the prevention of obesity and type 2 diabetes through nutrition education and exercise and the recruitment and retention of underrepresented students. She currently serves as the Primary Investigator for the Washington Baltimore Hampton Roads Alliance – Louis Stokes Alliance for Minority Participation grant, to increase the number of underrepresented minorities who choose careers in STEM. She has served as the Co-Principal Investigator (PI) of a grant from the Health Resources and Services Administration (HRSA), Nurse Education Practice and Retention (NEPR) Program to increase the recruitment, retention and number of baccalaureate prepared nursing students graduating. In addition, she has served as the PI of small pilot grants to study the effects of nutrition, exercise, and education with rural elementary school-aged children and as the Co-PI of a National Library Medicine Environmental Health Information Partnership Outreach Award. She and her students have disseminated health information to the lay community on health promotion and prevention programs regarding behavior and lifestyle changes affecting the school-age population who experience health disparities.