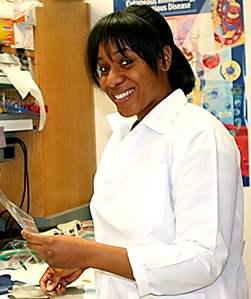 Dissertation Abstract: Obesity has become a major worldwide health issue over the past few years and often leads to insulin resistance (IR) and type 2 diabetes (T2D). Macrophage accumulation in adipose tissue (AT) during obesity contributes to inflammation and IR. In the decade since macrophages were shown to accumulate in AT, the majority of studies have focused on recruitment-dependent mechanisms for their accrual. However, recent evidence suggests that recruitment-independent mechanisms, including increased proliferation and decreased egress, may also regulate pro-inflammatory AT macrophage (ATM) numbers. Interestingly the regulation of longevity in ATM accrual in obesity had not been explored. The work in my dissertation shows that increased ATM survival during obesity is a recruitment-independent mechanism that contributes to ATM accumulation. Results: My studies demonstrated that cleaved caspase 3 activation is significantly reduced in the ATMs of diet-induced and genetically obese mice. This data suggests that activation of apoptotic pathways is significantly reduced in ATMs from diet-induced and genetically obese mice. Concurrently, pro-survival Bcl-2 family member protein levels and localization to the mitochondria was elevated in ATMs from obese mice. Conversely, the activities of pro-apoptotic proteins Bax and Bak were decreased in ATMs from obese compared to lean mice. Interestingly, this increased pro-survival signaling in obese ATMs was associated with elevated activation of the p65 subunit of the transcription factor, NF-κB. Furthermore, NF-κB was more nuclear localized in ATMs of obese mice, resulting in increased expression of NF-κB pro-survival target genes, XIAP and cIAP. Finally, an obesogenic milieu increased ATM viability only when NF-κB signaling pathways were functional. Conclusions: Our data demonstrate that obesity promotes survival of inflammatory ATMs, possibly through an NF-κB-regulated mechanism.