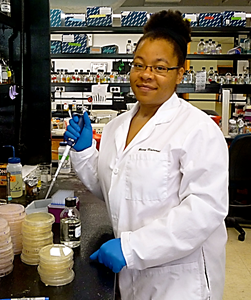 Dissertation Abstract: Many eukaryotes use the ribonucleoprotein telomerase to replenish telomeric sequences lost during conventional DNA replication. In Saccharomyces cerevisiae, telomerase contains the catalytic reverse transcriptase, Est2p, the templating RNA, TLC1, and two accessory proteins, Est1p and Est3p. Little is known about how the components of telomerase assemble away from the telomere. However, studies monitoring the localization of TLC1 RNA have led to the hypothesis that the telomerase complex assembles in the cytoplasm and is imported through a pathway previously shown to transport TLC1. Because Est1p abundance is uniquely cell-cycle regulated, we reasoned that the model for telomerase assembly may involve additional complexity. Here we show that the nuclear localization of Est1p requires three cis-acting nuclear localization sequences (NLSs). Mutation of an NLS within Est1p perturbs telomere maintenance in a manner that is rescued by fusion with an exogenous NLS. Nuclear import of Est1p requires a pathway different from that utilized by TLC1 RNA, indicating that assembly of TLC1 and Est1p in the cytoplasm is unlikely. These investigations reveal that one key step of telomerase biogenesis occurs in the nucleus and have implications for how the cell might regulate other such complexes whose activity is restricted in the cell cycle.