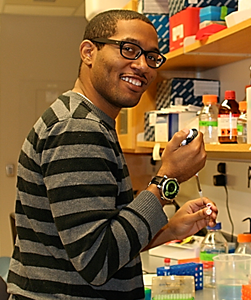 Dissertation Abstract: Microtubule-associated proteins (MAPS) frequently influence microtubule (MT) dynamics and may also alter MT-dependent processes, such as protein trafficking. RASSF1A is a MAP that is frequently silenced in most human cancers; however, the biological role of RASSF1A on MTs is not well understood. Therefore, a study of the effect of RASSF1A expression and depletion on MTs in non-cancerous and cancerous cell lines was undertaken. RASSF1A localization on MTs provided both a stabilizing and protective effect when challenged with depolymerizing drugs. Additionally, RASSF1A-associated MT segments (RaMs) functioned both as platforms for MT growth, in addition to functioning as a MT bundling factor. Furthermore, loss of RASSF1A led to increased MT dynamicity and alterations in Golgi integrity. Moreover, RASSF1A depletion also resulted in defects in cell migration, which were partially rescued by RASSF1A re-expression.

Endosomal trafficking from the perinuclear region to the cell periphery is a coordinated process that involves both MTs and actin; however, it is currently unclear if trafficking of c-Src requires one or both of these to be correctly positioned within the cell. Therefore, a study on the reliance of c-Src on these cytoskeletal elements, as well as the molecular players involved was undertaken. c-Src-positive vesicles are trafficked bidirectionally along MTs; however, MT depolymerization leads to a faster, less directional trafficking by actin comet tails (ACTs). Inhibition of MT-regulated GEF, GEF-H1, results in significantly decreased ACT formation. Furthermore, the actin nucleator, RhoB, is also found associated with c-Src vesicles and exhibits increased activation upon MT depolymerization. Thus, this establishes a crosstalk mechanism that bridges the current MT and actin-independent models of c-Src trafficking.