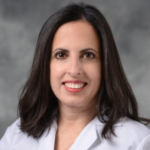 Rana Awdish, MD, is the author of In Shock, a critically-acclaimed, best-selling memoir based on her own critical illness. A critical care physician and faculty member of Wayne State University School of Medicine in Detroit, Michigan, she completed her medical degree at Wayne State in 2002 where she was inducted into the Alpha Omega Alpha national medical honor society, her residency at Mount Sinai Beth Israel in New York, and her fellowship training at Henry Ford Hospital where she serves as the current Director of the Pulmonary Hypertension Program. She was also recently named Medical Director of Care Experience for the entire Health System. Dr. Awdish’s mandate is to improve the patient experience across the system and speak on patient advocacy at health care venues nationally.

After suffering a sudden critical illness herself, she has special interest in improving empathy through connection and communication. She lectures to physicians, health care leaders and medical schools across the country. She was awarded the Speak-Up Hero award in 2014 for her work establishing a workshop based program called CLEAR (Connect, Listen, Emphasize, Align, Respect), which trains faculty and trainees in relationship-based communication skills utilizing improvisational actors. She was named Henry Ford Hospital’s Critical Care Teacher of the Year in 2016. She was recently named the National Compassionate Caregiver of the Year by The Schwartz Center on November 16, 2017, and the Physician of the Year by Press Ganey on November 1, 2017. She has been interviewed by The Times, The Telegraph, The BBC, NPR, the Today Show online, MedPage, Health Leaders Media, and Beckers Hospital Review. Her New England Journal of Medicine Perspectives article, A View from the Edge, went viral garnering over 100,000 views and is ranked in the 99th percentile for reach.