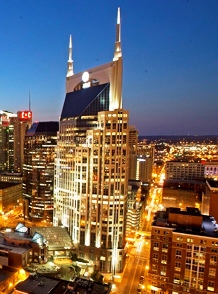 Vanderbilt's hometown of Nashville is a vibrant, engaging city known proudly as "Music City, U.S.A." Located a little more than a mile from downtown, the university’s students, faculty, staff and visitors frequently cite Nashville as one of the perks of Vanderbilt. From serving as home to the nation’s largest Kurdish population to being named America’s friendliest city many times over, Nashville is a metropolitan place that proudly exudes all of the charm and hospitality one expects from a Southern capital.

Nashville ranks 4th out of 383 metropolitan areas for economic strength, according to the 2018 Economic Strength Rankings published by Policom Corporation. Inclusion on this list means that Nashville has had rapid, consistent growth in both size and quality for an extended period of time.

The city was settled in 1779 and permanently became state capital in 1843. The city proper is 533 square miles with a population of nearly 655,000. The Metropolitan Statistical Area encompasses eight counties — Cheatham, Davidson, Dickson, Robertson, Rutherford, Sumner, Williamson and Wilson — and has a population of 1.6 million.