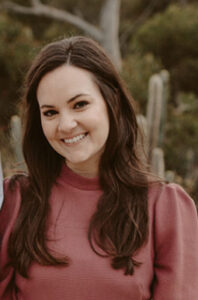 Alexandra Anderson grew up in Gilbert, AZ and is a 4th-generation graduate of Arizona State University where she earned a degree in English. In the years post-graduation, she has lived in New York City, Philadelphia, and San Diego working in HR and talent acquisition. A few years ago, a family friend going through prenatal genetic counseling care introduced her to the field and she decided to make a career change!

While taking the pre-requisite courses for Genetic Counseling admissions she was a TA for her Anatomy class and a volunteer for Planned Parenthood. She currently owns her own consulting company for executive leadership online learning production. In her free time, Alexandra loves snuggling her bulldog puppy and going out to try new restaurants. 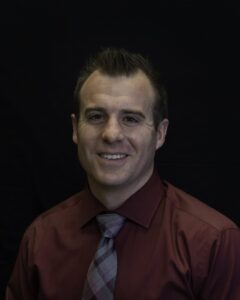 David Baker grew up in Henderson, KY. He graduated from Montana State University in 2020 with a bachelors in bioengineering and a minor in biomedical engineering with a focus on genetics. While completing his bachelors, he conducted research on isotherm dynamics and optimization in flow systems, and biofilm production optimization in bioreactors. He also volunteered as a crisis counselor for the Crisis Text Line during his undergraduate and continues to do so. After graduating from MSU, David has been working as a lab technical assistant at Billings Clinic Hospital, and volunteering as a genetic counseling assistant in the cancer center at Billings Clinic. As an outdoors enthusiast, David spends any free time exploring and enjoying the outdoors with his dog and friends. He also enjoys playing soccer, shooting sports, and exercising. 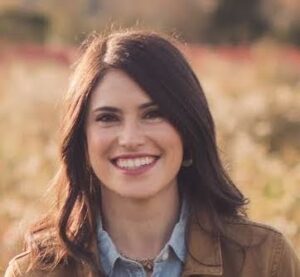 Elian “Elle” Silverman Bentley graduated from Grinnell College in 2015 with B.A. in a in biology and religious studies. After receiving her diploma, she went on to work at the National Human Genome Research Institute, American Society of Nephrology, and TED Conferences. During this time, she discovered her interest in science communication and earned a master’s degree in science writing from Johns Hopkins University in 2019. Elle has written for healthcare advertising agencies, the TED Ideas Blog, the TED Blog, and Grinnell Magazine. In her free time, Elle enjoys playing soccer, gardening, traveling, trying new restaurants, and spending quality time with her husband, Spencer, and dog, Tiny Dancer. 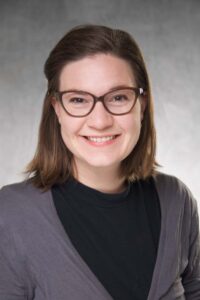 Chloe Cevan is from Cedar Rapids, Iowa, but has spent the last ten years in Iowa City. She spent her early twenties working in childcare and exploring the Iowa City queer community before pursuing her bachelor’s degree in Biology at the University of Iowa. Chloe spent time volunteering with the University of Iowa’s Rape Victim Advocacy Program and trained as a Queer Health Advocate. During her undergraduate career she served on the Biology Department’s Diversity, Equity and Inclusion Committee and studied the genetic bases of cardiac arrhythmias in the laboratory of Dr. Barry London. Chloe also worked as a genetic counseling assistant in the department of Hematology and Oncology at the University of Iowa Hospitals and Clinics. She enjoys reading science fiction novels and trying new restaurants with her wife. 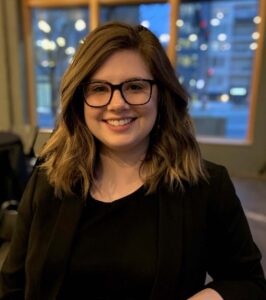 Anna Fangmeier grew up in Lincoln, Nebraska, and graduated from the University of Nebraska-Lincoln in 2014 with a Bachelor of Arts degree in music and a minor in biochemistry. During her undergraduate studies, Anna played clarinet in the wind ensemble and tenor saxophone in the marching band. She pursued an interest in neuroscience as an undergraduate research assistant in the Developmental Brain Laboratory, a neuropsychology laboratory that used electroencephalography to study brainwave data. After graduating in 2014, Anna worked as an analyst in pharmaceutical research while working towards her Bachelor of Sciences degree in biology. After completing her biology degree in 2016, she worked at the University of Nebraska Medical Center as a research technologist in the Department of Neuroscience. She recently began working as a genetic counselor assistant for PerkinElmer Genomics. She was a volunteer for the domestic abuse hotline at the Women’s Center for Advancement, and a clarinetist in the Nebraska Medical Orchestra. In her free time, Anna enjoys listening and playing music, reading, cooking and eating food, and exploring new places. 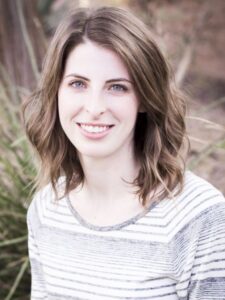 Tielle Gallion is originally from Missouri. She graduated with a bachelor’s degree in Medical Laboratory Science in 2015 from Brigham Young University in Provo, Utah and soon after started a career as a medical technologist at the St. George Regional Hospital laboratory in southern Utah. Her passion has been working in the hematology department and collaborating with pathologists to screen for hematologic malignancies. Outside of work, she completed an internship with a cancer genetic counselor at Intermountain Precision Genomics and assisted in their MMR IHC project to identify patients meeting criteria for Lynch syndrome genetic testing. She has also enjoyed volunteering in her community as a Court Appointed Special Advocate (CASA) befriending and advocating for abused and neglected children and serving in the local Alzheimer’s Association chapter. Tielle likes to spend her free time with family, taking long walks, listening to audiobooks, playing games, and frequenting her favorite restaurants.

Kelsey Hazelberg grew up in Milwaukee, Wisconsin and graduated from Mount Mary University in 2017. At Mount Mary they earned a bachelors in Biology and a minor in Philosophy with a concentration in gender studies and queer theory. After graduation, their passion for improving health equity led them to work at a Planned Parenthood health center where they counseled patients with a focus on providing gender affirming and trauma informed care. Kelsey volunteered and traveled with a variety of nonprofit organizations to encourage voting in the 2020 Presidential election, including Voces De La Frontera which focuses on advocating for voting and workers rights of Latine populations. In their free time, Kelsey enjoys gardening, watching true crime documentaries, astrology and dancing to pretty much any Lady Gaga song. They are very excited to move to Nashville and become a part of the Vanderbilt community! 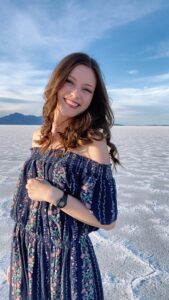 Layne Wells grew up in Barrington, Illinois and graduated from Scripps College in May 2019 with a B.A. in Neuroscience and concentrations in Chicanx/Latinx Studies and neurolinguistics. Her undergraduate thesis explored the epigenetic landscape of Alzheimer’s disease and potential endophenotypes for its diagnosis and treatment. As an undergraduate, Layne worked as an international medical shadow and translator in Chile, middle school science teacher and lab instructor, and Expecting Health intern at Genetic Alliance. She studied abroad in Amsterdam, with a focus on cognitive neuropsychology and medical humanities, and served as a photo correspondent across Europe and North Africa. After graduating, she established the genetic counseling assistant role in Pediatric Cardiology at Primary Children’s Hospital in Salt Lake City, Utah and volunteered as a children’s grief group facilitator, domestic violence crisis phone-line advocate, and Birds & the Beehive ambassador for Planned Parenthood Utah. In her free time, Layne can be found knitting, roller-skating, and exploring State and National Parks.

MGC in the News