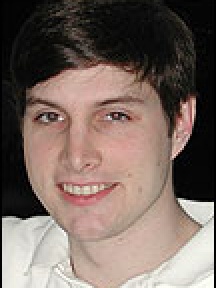 They call me Matt. I was born and raised here in Nashville. Before long, it was discovered that I suffered from the incurable geek disease, so before I even got to high school I had taught myself to program. Though I enjoyed and did pretty well at chemistry in school, it came as something of a surprise to me when I ended up working here at the Vanderbilt MSRC.

After graduating from Rensselaer Polytechnic Institute in May of 2005 with a BS in computer science, I pursued a development career in the (computer) gaming industry for several months. Gaming and game development are my favorite pastimes.

However, after discovering I did not have the formal (industry-based) experience necessary to get the kind of position I wanted with a game developer, I looked for a more general programming job. I was fortunate enough to find David Tabb who was looking for a programmer to help him with his new research into shotgun proteomic analysis. I was intrigued with the position despite having little formal background in biochemistry. Since October 2005, I've been signed up to work with this highly experienced group at the MSRC, and I've enjoyed every minute of it so far.

I have worked on many projects both in school and in my free time. From 2004-2005 I worked with a team of artists and designers to create a game based on the Half-Life 2 engine. Later in 2005 I worked on building an experimental game engine of my own. I also developed applications and provided some consulting services for friends and relatives that requested them for their businesses.