“The Effort Report”: A Podcast about Academic Medicine and Research 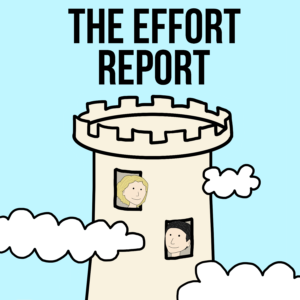 “The Effort Report,” a podcast hosted by Professors Elizabeth Matsui, MD, and Roger Peng, PhD, explores the intricacies and practicalities of academia. The show is directed at those who are in faculty positions, considering an academic career, or interested in academic medicine and/or research. Since its inception in July 2016, the podcast has generated over 60 episodes on iTunes, a Twitter handle with over 1,500 followers, a website, and even “Effort Report” stickers.

The podcast, named after the report that federal grant recipients have to fill out to certify that they did the work that was agreed upon upon awarding of funding, began when Peng proposed the idea to Matsui, as they frequently collaborateon clinical and epidemiological studies.

“I like working with him so much that if he said, let’s start a project – fly to Mars – I’d be like okay sure, that sounds fun…and I’d learn a lot in the process,” Matsui said over a phone interview. “[Peng] tends to like to set goals in metrics. So he said, what should our metric be?  And I said, for me, it should just be having a good time. And that has not changed.”

The tone of the podcast is conversational and practical, with grounded anecdotes and self-deprecating humor. Peng’s laugh is frequent and infectious, and both offer insightful advice to those interested in or pursuing academia. The podcast covers an expansive range of topics, including mentor-mentee relationships, faculty salaries and promotional tracks, and more lighthearted topics such as the academic wardrobe.

Dr. Peng is a Professor in Biostatistics at the Johns Hopkins Bloomberg School of Public Health. He also co-directs a popular data science course on Coursera as well as another podcast on data science. Currently, he is on sabbatical in Melbourne, Australia to work on a new book.

Dr. Matsui is a Professor of Pediatrics, Epidemiology, and Environmental Health Sciences at Johns Hopkins University. She is a practicing pediatrician, allergist-immunologist and epidemiologist. She earned her bachelor’s and medical degrees at the Vanderbilt University School of Medicine. Next year, she will be moving to Austin, Texas, to accept a position at the Dell Medical School at the University of Texas at Austin.

As an alumna of Vanderbilt University School of Medicine, Matsui agreed to be interviewed on her career path and perspective. The following transcript has been condensed and edited with permission.

How did you decide that you wanted research to be part of your career?

I went to Vanderbilt for medical school, then pediatric residency at UCSF, which I finished in 1996. I thought I wanted to do a pediatric Heme-Onc fellowship, but my fiancé was a resident at the University of Washington, so I went up to Seattle and spent a couple years working in a lab and moonlighting until we were on the same timeline. Then, we both applied for fellowships. So we moved here to Baltimore – we both actually got Heme-Onc fellowships.

Back then, I had picked a subspeciality based on my clinical interest and not necessarily my research interest, and it turned out that I was not interested in research in Heme-Onc. So, I bailed out of my fellowship – which is generally not advisable, but I think people have forgiven me for it, because I still see the people who would have been my Heme-Onc colleagues.

I found a job as a general pediatrician at a community hospital that had a family medicine residency. And I morphed this clinic into a school-based asthma clinic, and I became interested in a problem – and that was, why were these kids having uncontrolled asthma when we know how to get asthma under control? So I got an internal grant from that hospital system, and I started doing case management and home visits to try to understand the children’s exposures.

I latched onto research because I found a problem I wanted to solve. We had collected all this data as part of this school-based asthma center that I had established and I had no idea how to make any sense of it. So I then reached out to a faculty member at Hopkins, who is now a professor emeritus, and he ended up being my fellowship mentor. He convinced me to do a fellowship, and he also strongly encouraged me to get formal training in epidemiology. So, I took advantage of the school of public health program here at Hopkins and I got a masters degree in epidemiology.

The first key ingredient of my research career was that I had a problem I wanted to solve that was important to me. And the second ingredient was that during my fellowship training, I had a pretty intensive formal experience in research methods.

What opportunities that you pursued early on made the greatest positive impact?

Getting the formal training with a Masters in Epidemiology was hugely impactful. And the other thing that was impactful was the people that have become my closest collaborators and friends. They have had an enormous effect on me as a scientist and on the impact that our work has had and I hope will continue to have.

What inspires you to have new ideas and be creative?

It’s a bit of a catch-22 because on one hand the best ideas come from looking at the data you’ve generated, but you have to data to do that, and when you’re starting out you don’t have data!

I would say the best place to start is to identify a problem you want to solve. The big problem for me is – why do kids from wealthier families tend not to have substantial problems with their asthma, yet low-income African American kids tend to have terrible asthma? Why is that happening, and how do we fix it? And you go and read the literature, and you would see that it’s happening because of these children often don’t receive guideline-based care, and it’s happening because of environmental exposures that wealthier and non-minority children tend not to have.

What advice do you have on working with a research mentor, and how do you find the right one?

A few rules of thumb: one, I would not just have one mentor – you of course need to have a primary research mentor – but over time, you want to take advantage of many different faculty. You identify 2-3 mentors who have complementary areas of expertise, or maybe the same area of expertise but they offer a little bit different perspective.

The second part of this I call this managing up – how you manage your mentor. I have one mentee that says at the end of the meeting: these are the things I’m going to get done, and I’m going to send them to you on x day so you have x amount of time to review. Sometimes, I’ll turn to other mentors to help me with a primary mentor. So that’s managing your mentor, managing up.

What advice do you have for trainees who are applying for their first grant?

The biggest pitfall is not allowing enough time. I think people approach the grant as, I remember when I had to write a paper for such and such class, and it’ll take just a few weeks to bang it out. And in actuality, it’s less about the writing. It’s really 80-90% about thinking through the structure and scientific rationale for the grant, and then there’s the writing and communication of it. For the NIH there’s a specific aims page – if you spend your majority of your time on that, then you have the framework to fill out the rest of your grant.

A third piece of advice is to have someone who is not in your field read it. Sometimes people want to use a lot of jargon, or they don’t even realize they’re using jargon. But if I’m reading a basic science grant and I can’t follow it, that’s a problem because even though I’m not a basic scientist, it should be understandable by anyone with a reasonable background in biomedical sciences.

Can you talk about your transition to Texas, and how you expect your work to change?

It’ll be hard to leave those really close collaborators and friends that I’ve mentioned, but I’m super excited about the opportunities there. The institution’s mission and values are in line with the work I do, and they are really trying to change how we train doctors and how we deliver our healthcare.

There are already projects that I’ve started to think about that are related to asthma and the environment, but the environment in Austin there is very different. There are some things that I’m starting from scratch, and there are some things that I’m doing that are expanded from what I do now, including taking on a leadership role in the research enterprise. In terms of clinical care, the details of that are still being worked out, but I will be doing pediatric allergy. It can be scary to think that in five years my job may look very different than the one I do now, but that’s part of the opportunity and the adventure of going a place new.