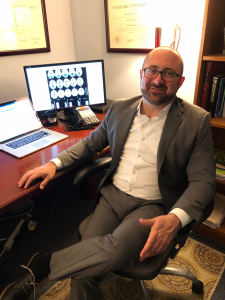 Al Powers, M.D., Ph.D., graduated from the Vanderbilt MSTP in 2012. He is originally from the New Haven area, was a Yale undergraduate, and returned after graduating from Vanderbilt to complete a research-track psychiatric residency at Yale University School of Medicine. He will be joining the Yale University Department of Psychiatry as an Assistant Professor on July 1 and will continue his role as Medical Director of the PRIME Psychosis Prodrome Research Clinic at Yale. His lab uses computational models to study hallucinations and other symptoms of psychosis. I first heard about Al when I presented Al’s recent Science publication titled: “Pavlovian conditioning–induced hallucinations result from overweighting of perceptual priors” at my graduate student MSTP seminar presentation. I called Al to ask him about his time at Vanderbilt, his residency, and the impressive start to his career.

As part of curriculum 1.0, Al’s first two years of medical school were classroom-based. While he knew he wanted to pursue a brain-based specialty, he had not decided which one. Upon entering graduate school, Al was completing lab rotations when he saw Dr. Mark Wallace speak at the MSTP retreat. Dr. Wallace described how information from different sensory modalities are integrated within the superior colliculus, and Al immediately knew he wanted to join Dr. Wallace’s lab. Once in the lab, Al said that his first few meetings with Dr. Wallace laid out his graduate training, including his F30 topic. Al believes this early communication about his timeline and projects was a critical foundation for successful graduate training. His other advice for graduate training success? Take the time to learn skills properly. Early on, he dedicated more than a full month to mastering MATLAB, which helped him throughout his training. It also helped with his favorite contribution to the lab: an elaborate MATLAB-scripted Secret Santa gift exchange program. His dissertation project described the plasticity of multisensory integration using fMRI. Grad school wasn’t all work, though; he thinks fondly of his time singing with Shun Minutia (which he still describes as the “greatest rock band of all time”) and the Nashville Symphony Chorus, as well as throwing elaborate parties with his friends from the MSTP (Nick Markham, Fyza Shaikh, et al), his lab, and his original medical school class.

He re-entered medical school primarily interested in neurology and neurosurgery, but on his psychiatry rotation he became fascinated with the phenomenology of psychosis. He rotated on the psychosis unit with Dr. Nathaniel Clark and saw the potential for integrating his clinical interests and research focus. He remembers a number of patients in the psychosis unit who were experiencing their first psychotic episode. Here Al saw the importance of early intervention in psychosis. During the match process, Al looked for programs with strong research support and clinical opportunities in early psychosis and matched into the Yale Psychiatric Residency Program.

During his residency, Al conducted research regarding the formation of hallucinations which resulted in his aforementioned Science publication. He credited the Yale residency program for having a good balance of rigorous clinical training with significant flexibility that allowed him time to conduct his research. He received money in the form of a Detre Award for Translational Research from the Department of Psychiatry, which provided the preliminary data for a NARSAD Young Investigator Award, which funded the remainder of his research work in residency.  Clinically, he worked throughout his residency in the early psychosis clinic and was later appointed medical director of the PRIME Psychosis Prodrome Research Clinic. These patients are at a high risk for developing psychosis and the program has an NIH-funded grant to look for predictors of which patients will develop a psychotic disorder. As a PGY6, he submitted and received a K award that extends his residency research into the clinical population at the Psychosis Prodromal Research Clinic. He also recently learned that he will be a recipient of a 2018 Career Award for Medical Scientists from the Burroughs-Wellcome Fund, which provides $700K over 5 years for research and salary support to physician-scientists from all medical disciplines. We discussed the difficulty for young investigators in starting their career, and Al emphasized the importance of an environment that supports research, including monetary support. Al also talked about how a research-friendly environment can prevent discouragement or burnout from the long training path of an MD/PhD student.

My conversation with Al emphasized the importance our MSTP community. Al and I have never met, but he talked to me for over an hour about everything from how to succeed during residency (work and life boundaries are key!) to places I have to check out in Nashville (City House and Station Inn are top of his list—although Brown’s, Melrose (the old, smoky one), and Holland House are tied for second). Throughout our conversation, he emphasized the Vanderbilt MSTP as a place of nurturing curiosity and fostering collaborations. Looking back, he describes his interactions with non-neuroscience MSTP colleagues as critical for practice talking about his research to different audiences. An MSTP college advisor, Maureen Gannon, Ph.D., who specializes in molecular and cell biology of the pancreas, sat on Al’s thesis committee, and he remarked that her questions were broad in scope, important, and helped him to focus on the big picture for his research. Through these conversations and those with medical colleagues who don’t participate in research, MD/PhD students are trained throughout their career to translate between different worlds, be it science and medicine or different fields of science. This is useful practice for grants and communications with the media; in addition, the ability to translate between fields is critical for leadership roles in academic medicine, where the worlds of science and medicine meet. As someone who has recently established his career as a physician scientist at a prestigious academic institution, Al is a great resource for students on success during MSTP training, residency, and early career. If you are interested in contacting Al, he encourages you to do so; he can be reached at albert.powers@yale.edu.