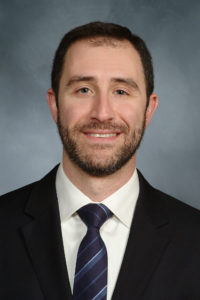 After earning a B.A. in Biophysical Chemistry from Dartmouth College, Dr. Christopher Barbieri spent a year as a research intern at Janssen Research Foundation in Springhouse, PA, before matriculating into the Vanderbilt MSTP. He completed his Ph.D. in Biochemistry studying transcriptional targets of the p53 family in the lab of Dr. Jennifer Pietenpol and graduated from the MSTP in 2007. He then moved to New York City for his residency in urology and fellowship in urologic oncology at the NewYork-Presbyterian/Weill Cornell Medical Center. He is currently an Assistant Professor of Urology and Cell and Developmental Biology at Weill Cornell Medical College and practices urologic oncology at the Sandra and Edward Meyer Cancer Center at the NewYork-Presbyterian/Weill Cornell Medical Center. His first R01 began early this year, and he’s now up for promotion to Associate Professor.

Dr. Barbieri recently returned to Vanderbilt to speak to members of the Vanderbilt-Ingram Cancer Center about his research in molecular subtypes of prostate cancer. During his residency, Dr. Barbieri worked under the mentorship of Dr. Mark Rubin in collaboration with Dr. Levi Garraway’s group to characterize somatic mutations in large cohorts of prostate cancer patients. This work led to the discovery of alterations in the gene encoding speckle-type POZ protein (SPOP) in 6-15% of localized and advanced prostate tumors. Dr. Barbieri’s group has since worked to further characterize this molecular subtype of prostate cancer and to define the mechanism of SPOP mutations in prostate tumorigenesis. His group’s recent publication in Cancer Cell showed that SPOP mutation in the setting of PTEN loss upregulates both phosphoinositide 3-kinase/mTOR and androgen receptor signaling, which are antagonistic in normal prostate tissue. His lab is now investigating the relationship between SPOP and chromodomain helicase DNA-binding protein 1 (CHD1), an ATP-dependent nucleosome remodeling protein that is commonly lost in SPOP mutated prostate cancers.

Perhaps most interesting to the general audience, Dr. Barbieri’s group also found that prostate-specific antigen (PSA) level is not a good risk stratifier for prostate cancers with SPOP mutations. Although SPOP mutant prostate cancers were found to be less invasive and confer a favorable prognosis, they were associated with high preoperative PSA levels. Dr. Barbieri hopes that this knowledge will lead to the exposure of fewer patients with high PSA levels to intensive radiation and androgen deprivation therapy based on their SPOP mutation status.

Members of the MSTP interested in urology and cancer biology also had the privilege of talking to Dr. Barbieri over lunch, where he shared his insight into his career as a successful physician-scientist. Dr. Barbieri expressed appreciation for the scientific rigor emphasized by Dr. Pietenpol, who expected her trainees to always conduct their experiments with the appropriate controls. He emphasized that “science moves fast,” so “techniques are meaningless,” and experience with asking and answering scientific questions is the most important thing to learn in graduate school. In terms of his postdoctoral research mentors, Dr. Barbieri suggested finding mentors who can give their trainees career advice, help them network at conferences, generate lots of collaborations, and advise their trainees on when they have enough data to apply for grants. Dr. Barbieri also gave us advice on how to carve out a research niche separate, but not too separate, from your postdoctoral research mentor. He said that having his own lab space directly adjacent to his mentor’s lab allowed him to utilize established resources and ramp up his own lab gradually.

Dr. Barbieri also emphasized the balance between practicing medicine/surgery and running a research lab. While he was a PGY3, he set up his research project. Then, he conducted a year of full-time research as a PGY4. He was lucky to have funding for a technician to maintain his project during his PGY5 and PGY6 years. Therefore, even during his urology training, Dr. Barbieri was able to complete a “four-year postdoc.” As a urologist, he spends one day per week in the operating room doing robotic radical prostatectomies. He spends one half day per week in clinic and has a nurse practitioner covering his clinic the rest of the time. Despite this excellent clinical support, he emphasized that he’s always making phone calls and monitoring his patients’ progress even when he’s not physically in clinic. Accordingly, Dr. Barbieri said, “For your first job, make sure you negotiate for your time. Tell them that this is the stuff you need to do the job they’re hiring you for.” Not surprisingly, based on reviews by his patients, he seems to do his job very well. (You can watch Dr. Barbieri’s Weill Cornell Medicine video about his research, medical practice, and family here.)