Posted by fettigma on Monday, April 29, 2019 in New Publications. 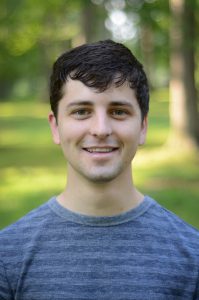 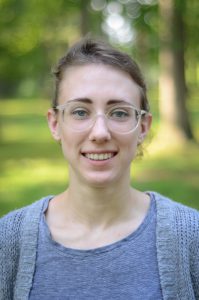 Transcriptional changes in the hippocampus are required for memory formation, and these changes are regulated by numerous post-translational modifications of chromatin-associated proteins. One of the epigenetic marks that has been implicated in memory formation is histone 3 lysine 4 trimethylation (H3K4me3), and this modification is found at the promoters of actively transcribed genes. The total levels of H3K4me3 are increased in the CA1 region of the hippocampus during memory formation, and genetic perturbation of the K4 methyltransferases and demethylases interferes with forming memories. Previous chromatin immunoprecipitation followed by deep sequencing (ChIP-seq) analyses failed to detect changes in H3K4me3 levels at the promoters of memory-linked genes. Since the breadth of H3K4me3 marks was recently reported to be associated with the transcriptional outcome of a gene, we re-analyzed H3K4me3 ChIP-seq data sets to identify the role of H3K4me3 broad domains in CA1 neurons, as well as identify differences in breadth that occur during contextual fear conditioning. We found that, under baseline conditions, broad H3K4me3 peaks mark important learning and memory genes and are often regulated by super-enhancers. The peaks at many learning-associated genes become broader during novel environment exposure and memory formation. Furthermore, the important learning- and memory-associated lysine methyltransferases, Kmt2a and Kmt2b, are involved in maintaining H3K4me3 peak width. Our findings highlight the importance of analyzing H3K4me3 peak shape, and demonstrate that breadth of H3K4me3 marks in neurons of the hippocampus is regulated during memory formation. 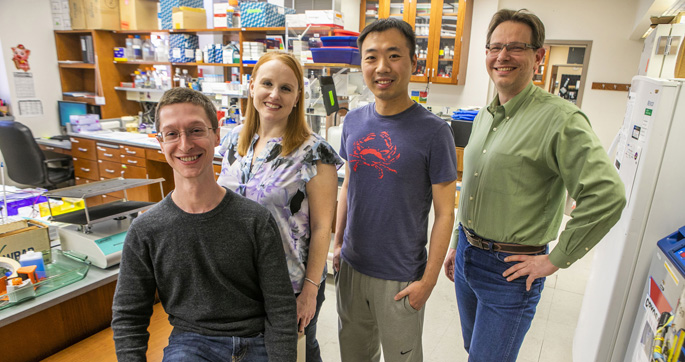 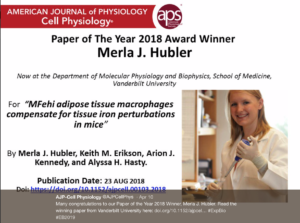 Merla Hubler’s first-author paper was honored as the 2018 American Journal of Physiology paper of the year! 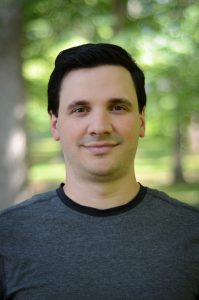 Matthew Puccetti’s recent first-author paper was featured on the cover of Cancer Research! The image is a photograph of strands of DNA from primary mouse B cells isolated from Zranb3– or Smarcal1-deficient Eμ-myc transgenic mice pulse-labeled with IdU (red) and CldU (green) detected by immunofluorescence and microscopy. The technique is called DNA fiber labeling.