An ode to our furry (and not-so-furry) friends who help us study for anatomy practicals, keep us company while we write our papers and thesis dissertations, and welcome us home after a long shift on surgery. This month features Dr. Mary Philip’s dog, some of our new grants manager, Julie Gannon’s, pets, and a feral cat colony! 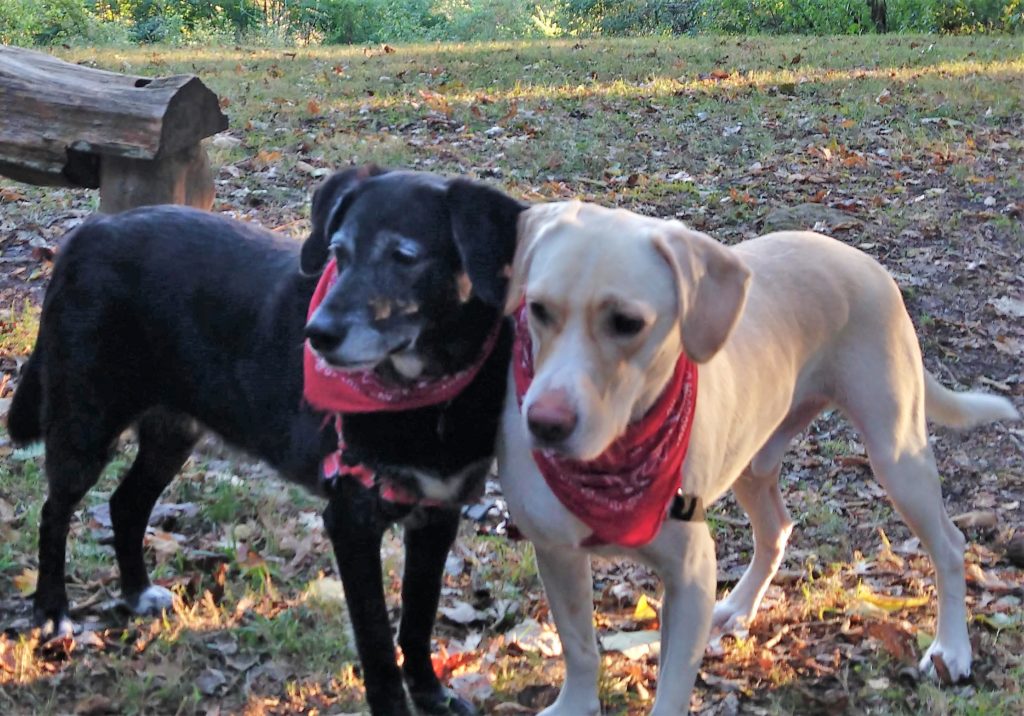 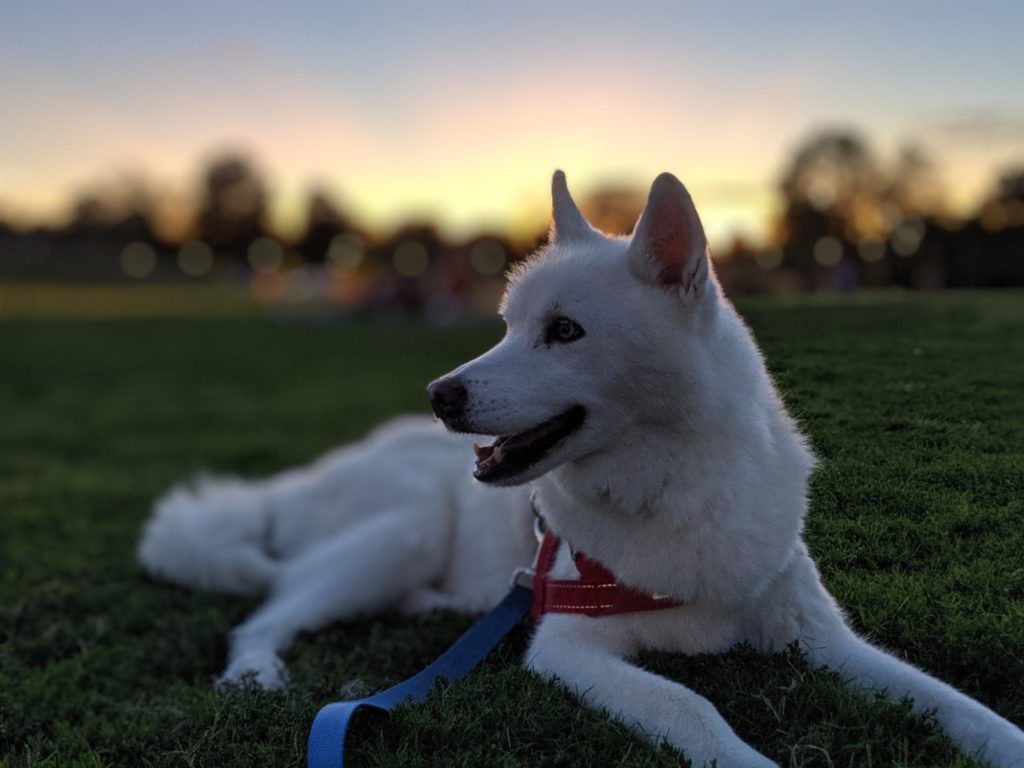 MSTPet: Eski
Age: 14 years old
​MSTParent: Leon Cai
Thesis Title: “Effects of tying carrots to frisbees on the efficacy of play time”
Fun Fact: His whole life, Eski has had little interest in bones and chew toys. However, he loves carrots, apples, and cucumbers–especially when they’re flying through the air tied to bright plastic discs. 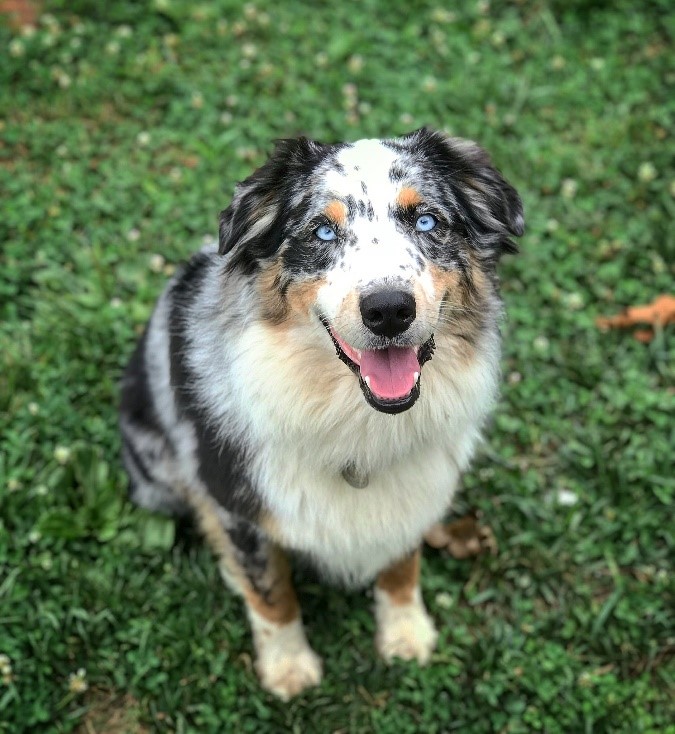 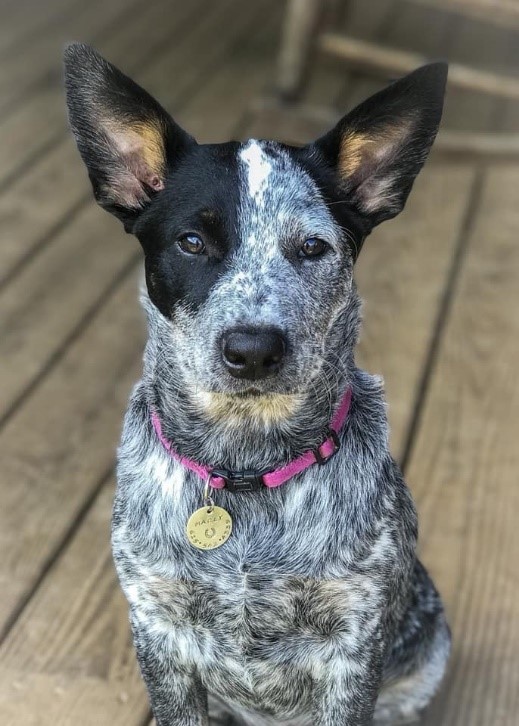 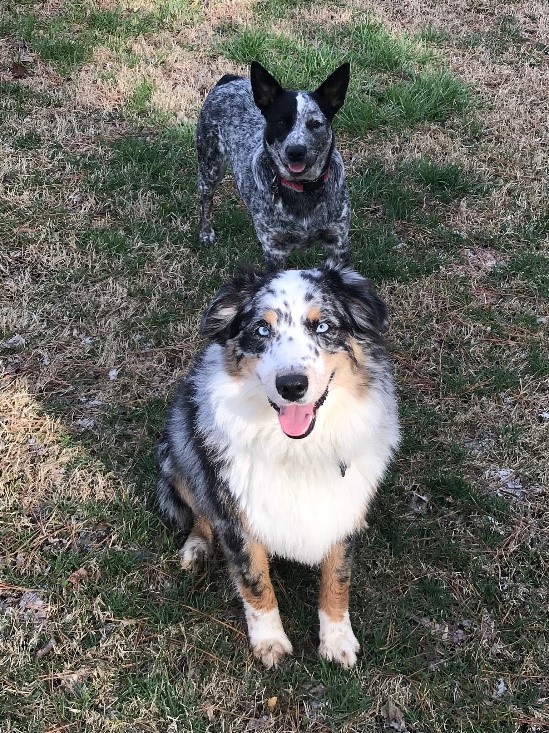 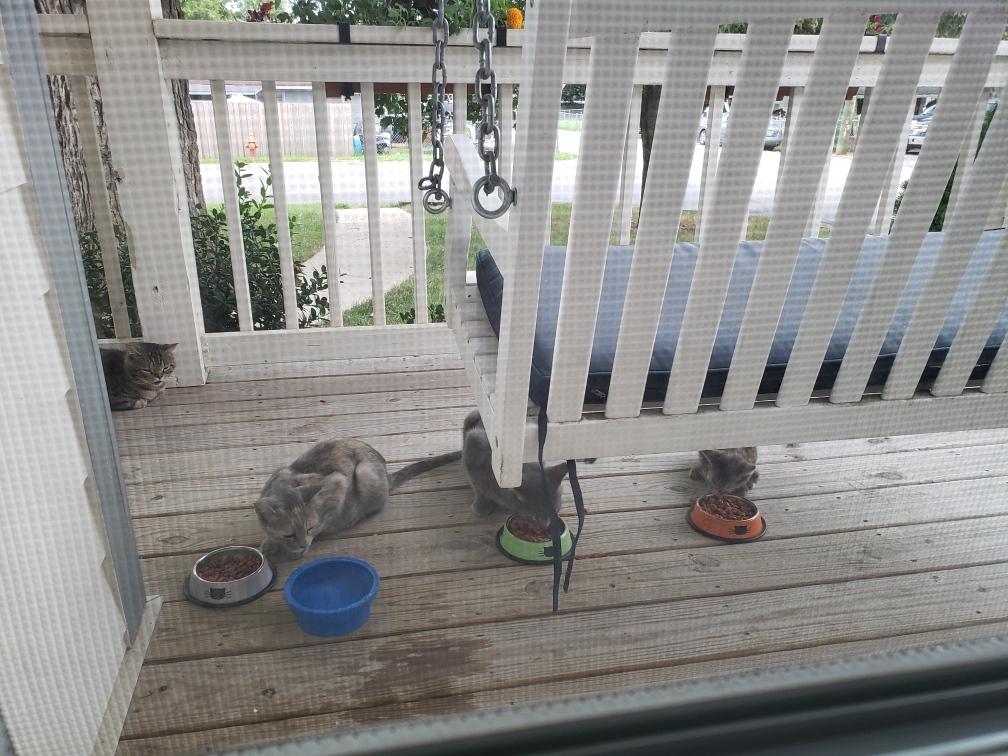 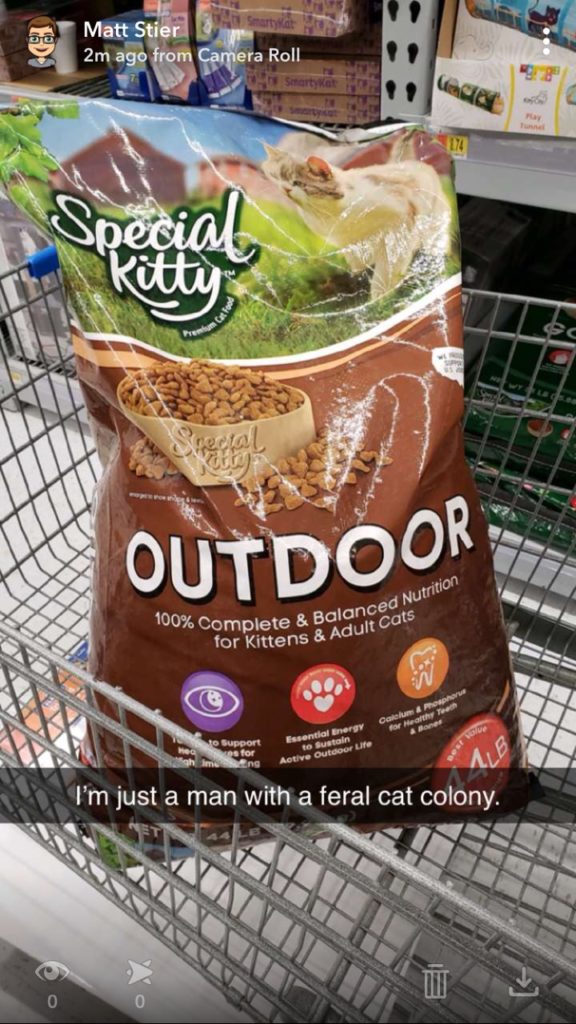 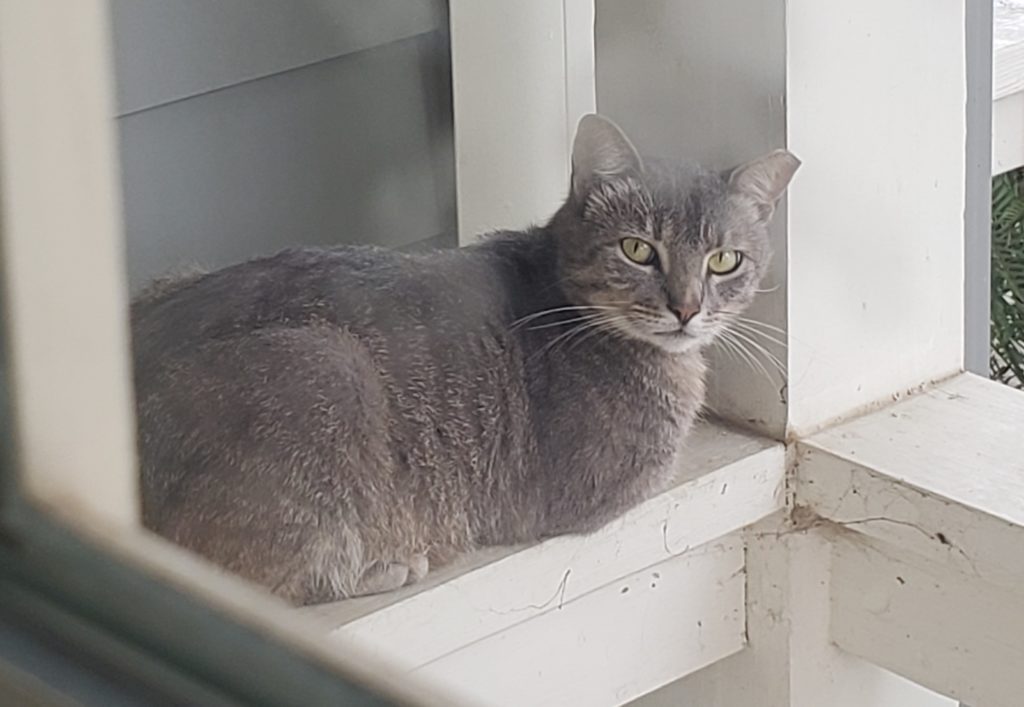 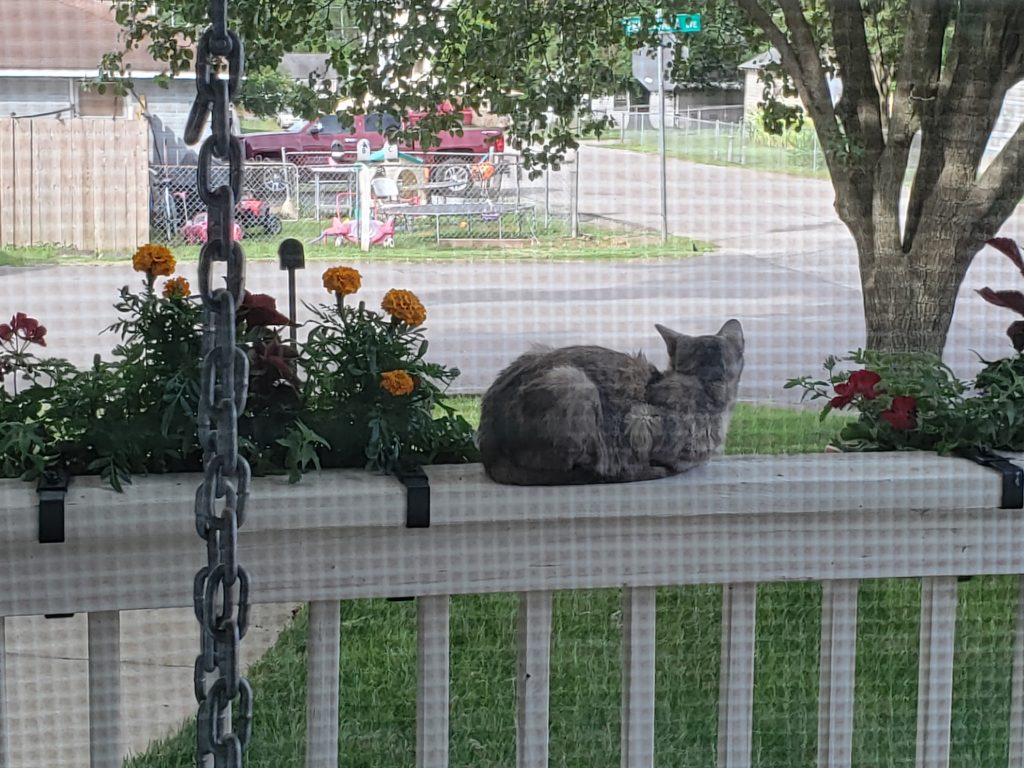 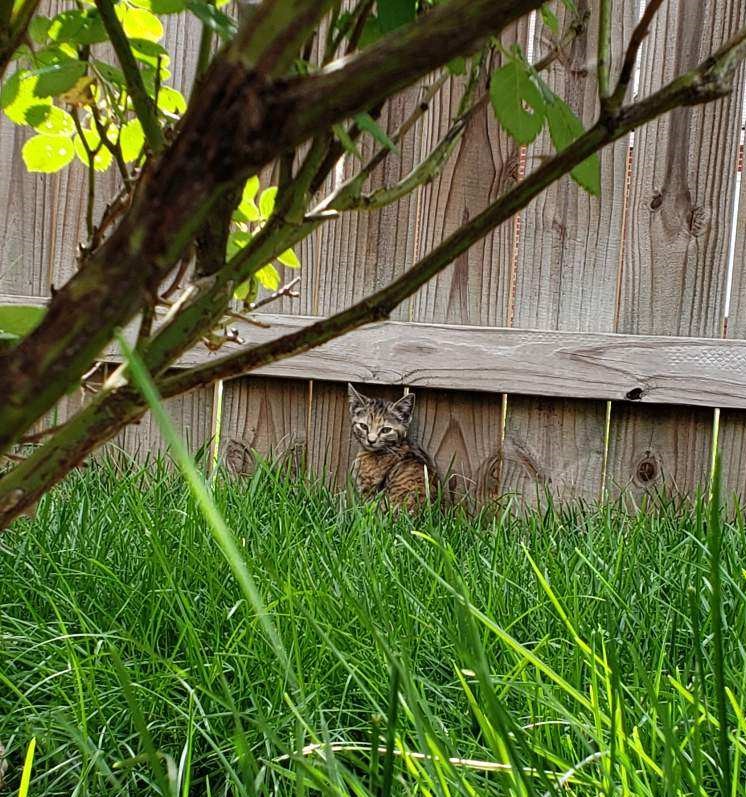 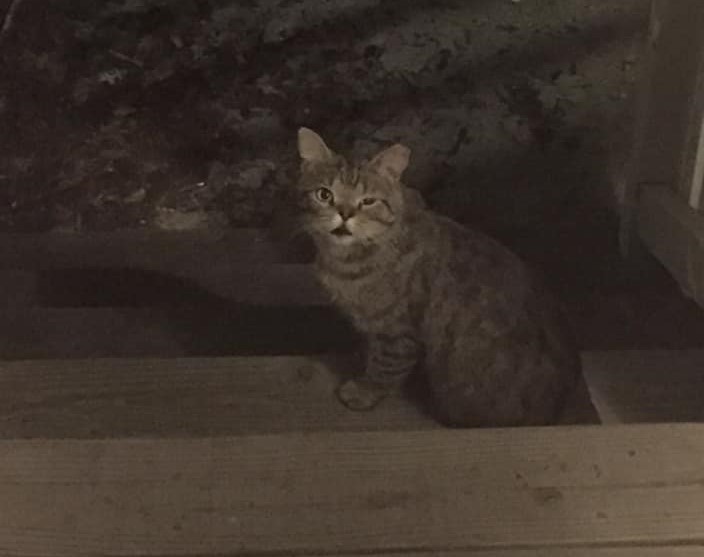 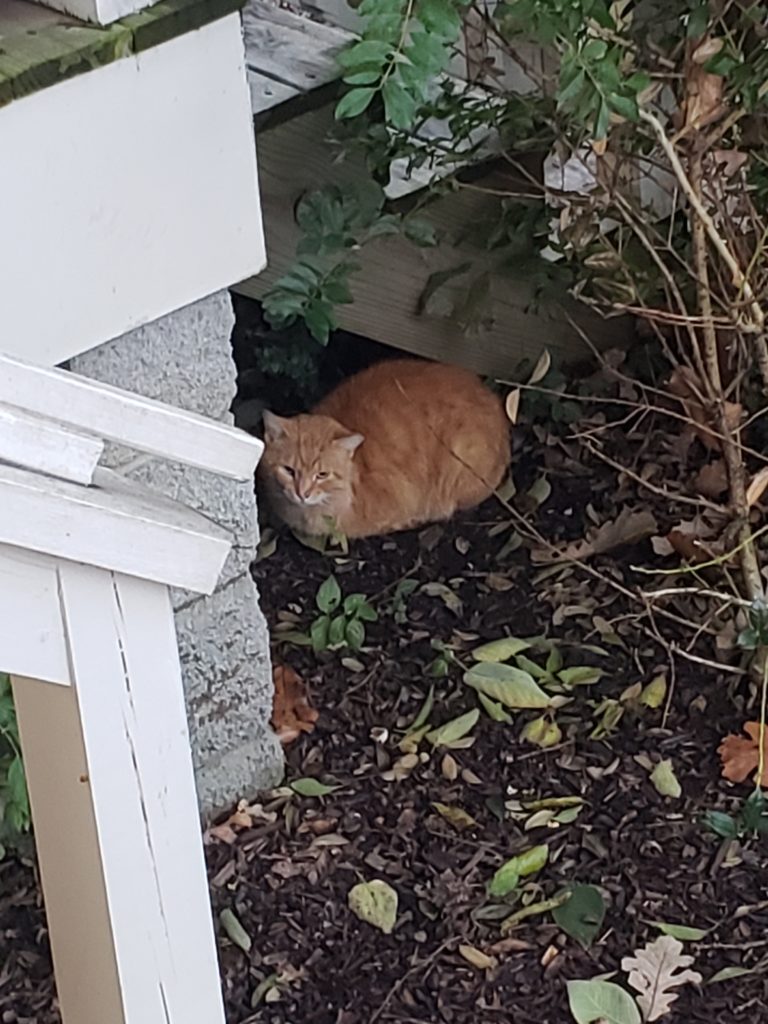 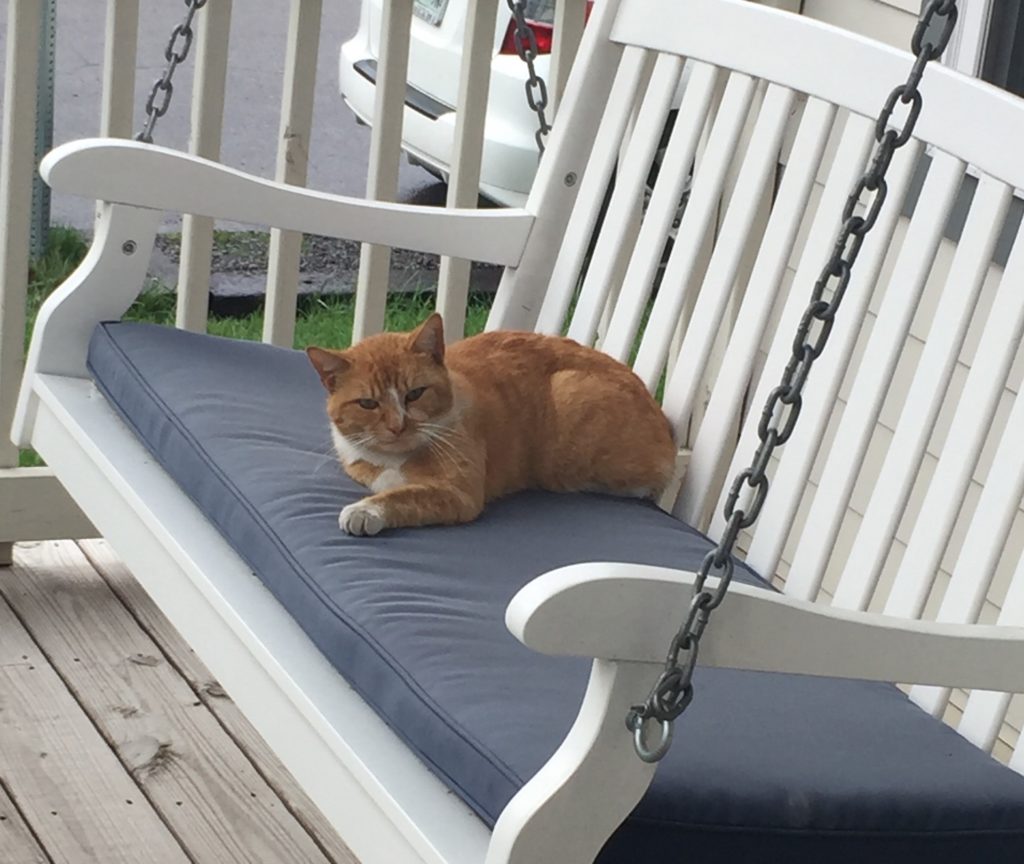 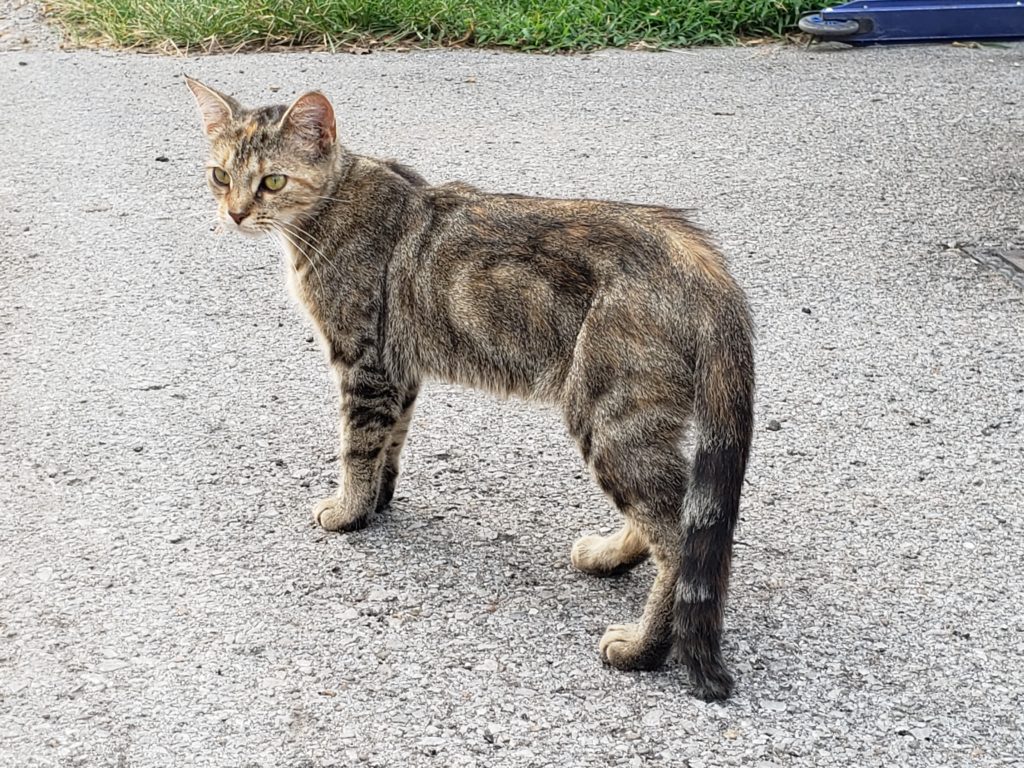 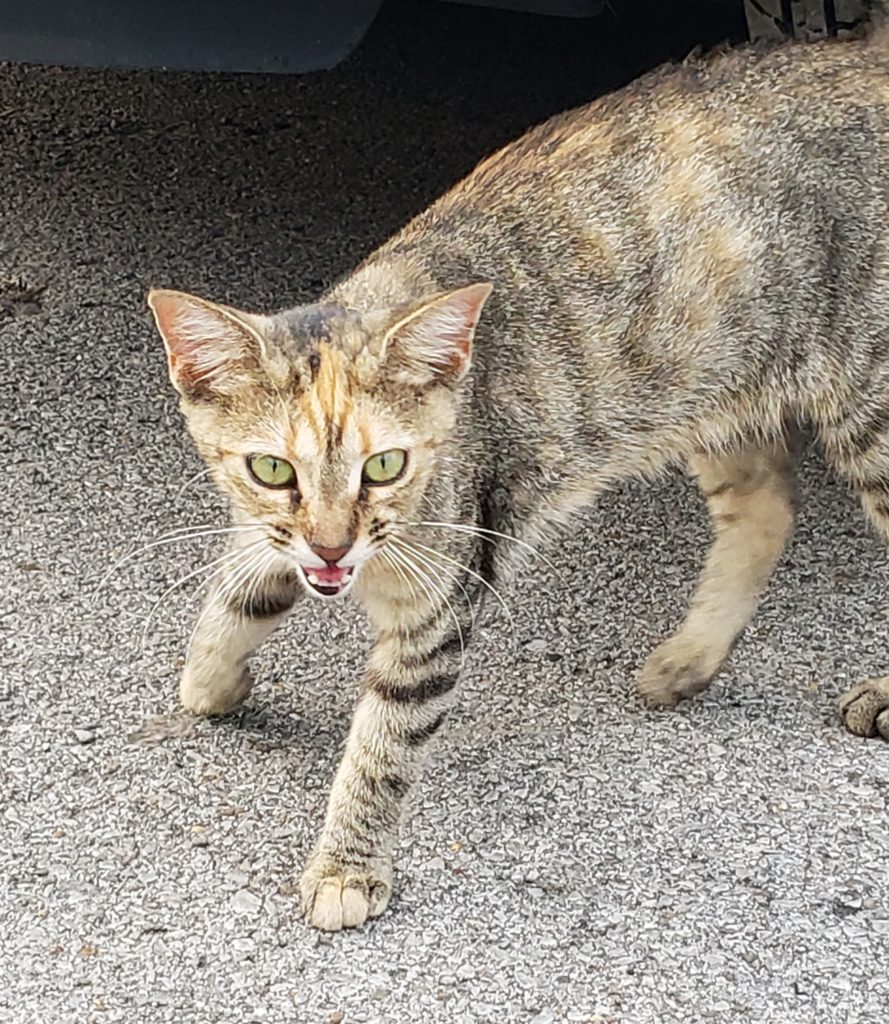 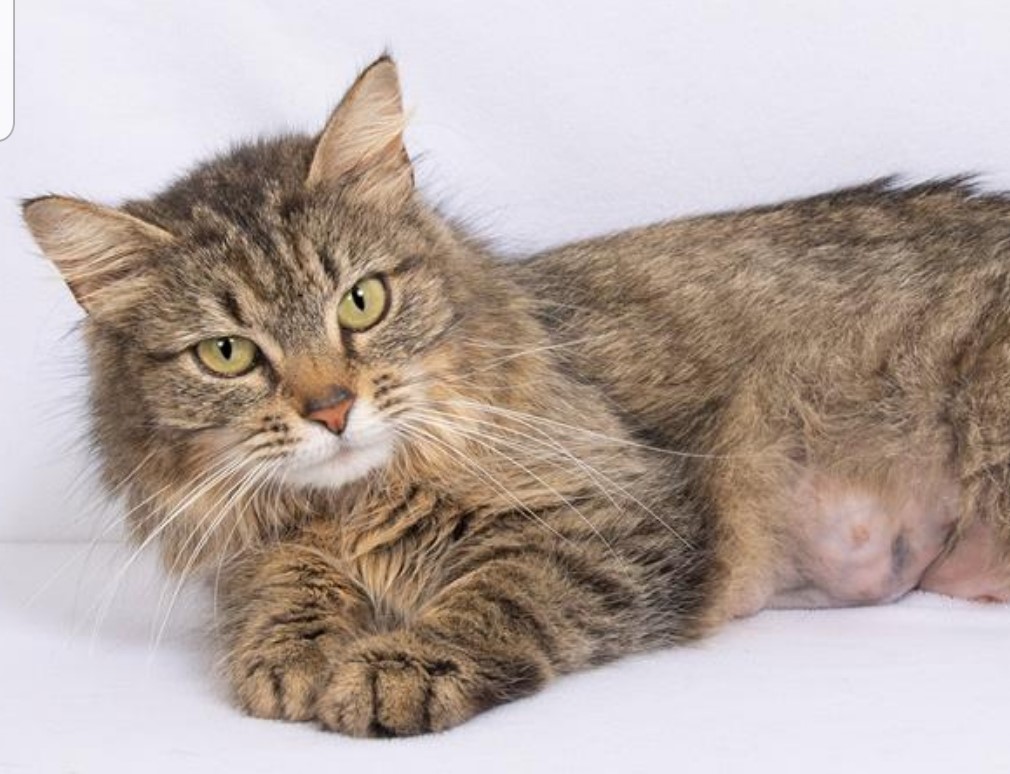 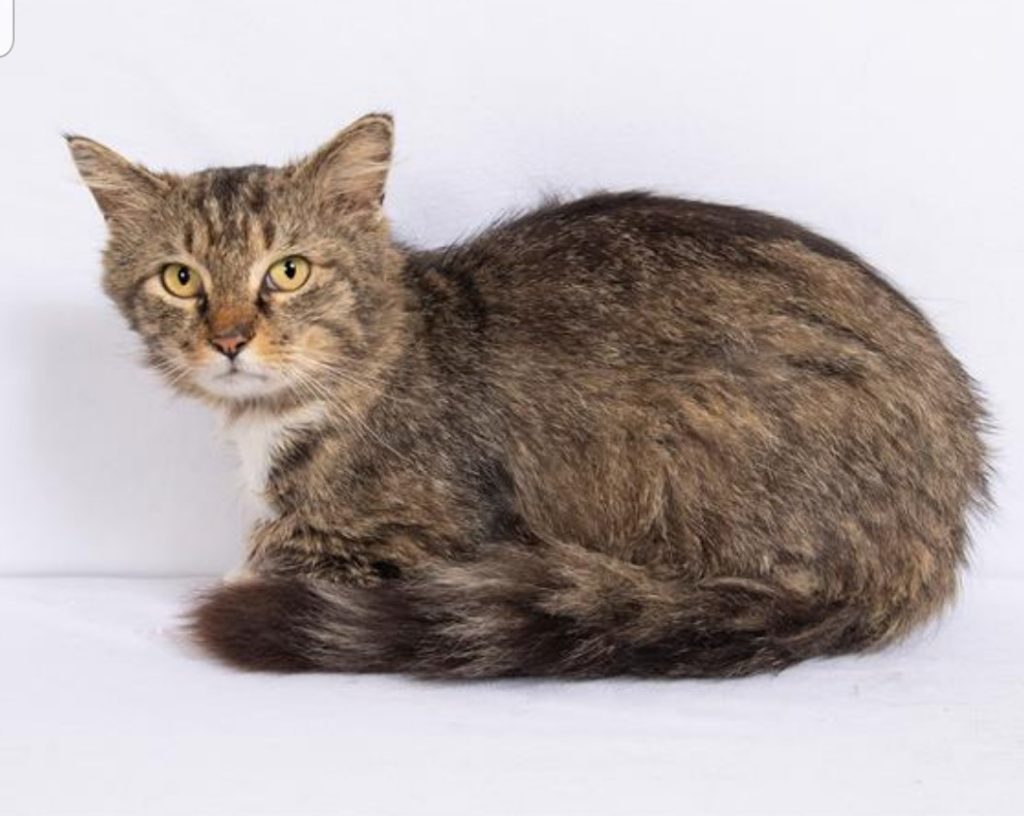 Reducing Pet Homelessness: When Matt and I (Rachel) moved to the Nations two years ago, we quickly discovered the booming stray cat population. We had 12 strays living on our street alone. Several traumatic times, I saw cats on the side of the road that had been hit by cars, which was just too tragic. We knew we had to do something, but didn’t really know how. I was told (by Matt and our bank account) that we couldn’t keep all 12 cats. More importantly, many of the stray cats on our street were feral and didn’t want to be approached by humans.

When a very friendly and socialized stray cat (now our cat Anya) arrived on our doorstep and demanded to be adopted, I looked into low-cost spay-and-neuter clinics. I discovered the Trap-Neuter-Return (TNR) program, also known as the Community Cat Program, run by the Pet Community Center (PCC) in conjunction with Metro Animal Care and Control (MACC). TNR is a humane way to reduce the homeless pet population. Feral cats are humanely trapped and taken to the PCC to be spayed or neutered, vaccinated, and treated for fleas. They also receive a left ear tip to permanently identify them as a “fixed” cat. They are then returned to where they are found and released as free-roaming cats. Community caretakers feed these cats without inadvertently increasing the pet homelessness problem. TNR has been shown to be effective in urban centers in the United States. Specifically, in Nashville, TNR has helped reduce cat euthanasia rates dramatically from 76% to 9%.

We have trapped and fixed 12 stray cats in our neighborhood. Four cats were friendly/socialized, but were unfixed, not microchipped, and malnourished and had no identifiable owners. These cats were adopted out through MACC!  We even got to see Chatty Kathy and Mallard go home with their new families. The other cats are Community Cats that live on our street as a feral cat colony and enjoy dinner on our porch every night. Here are some fun stories about some of our Community Cats. 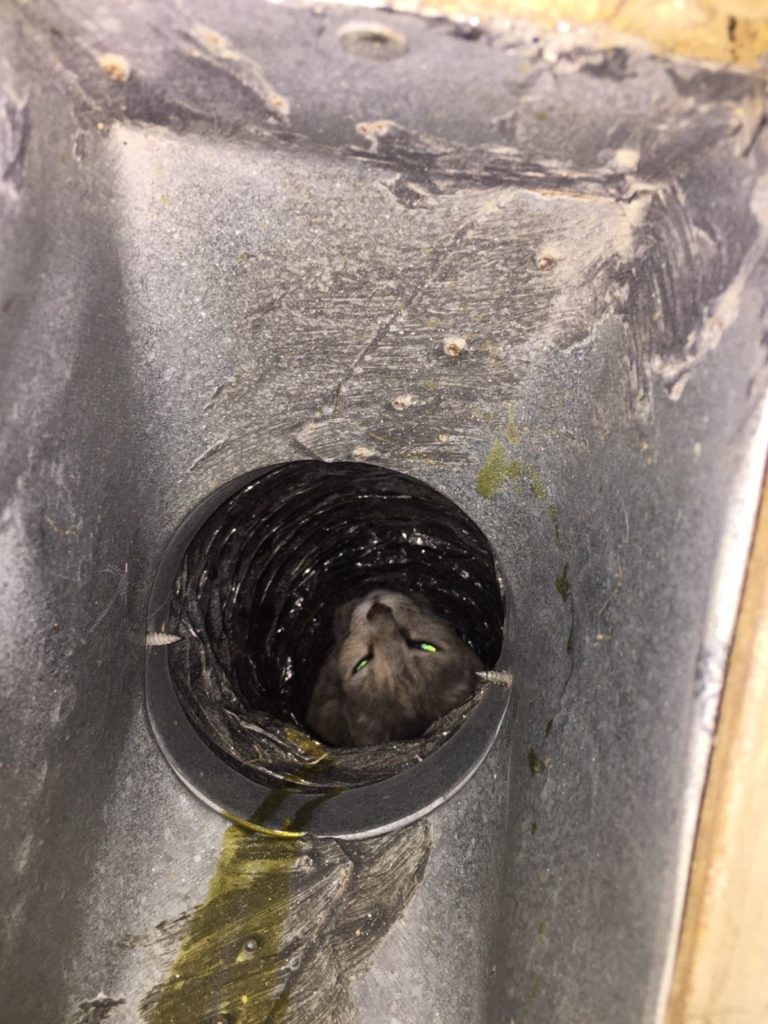 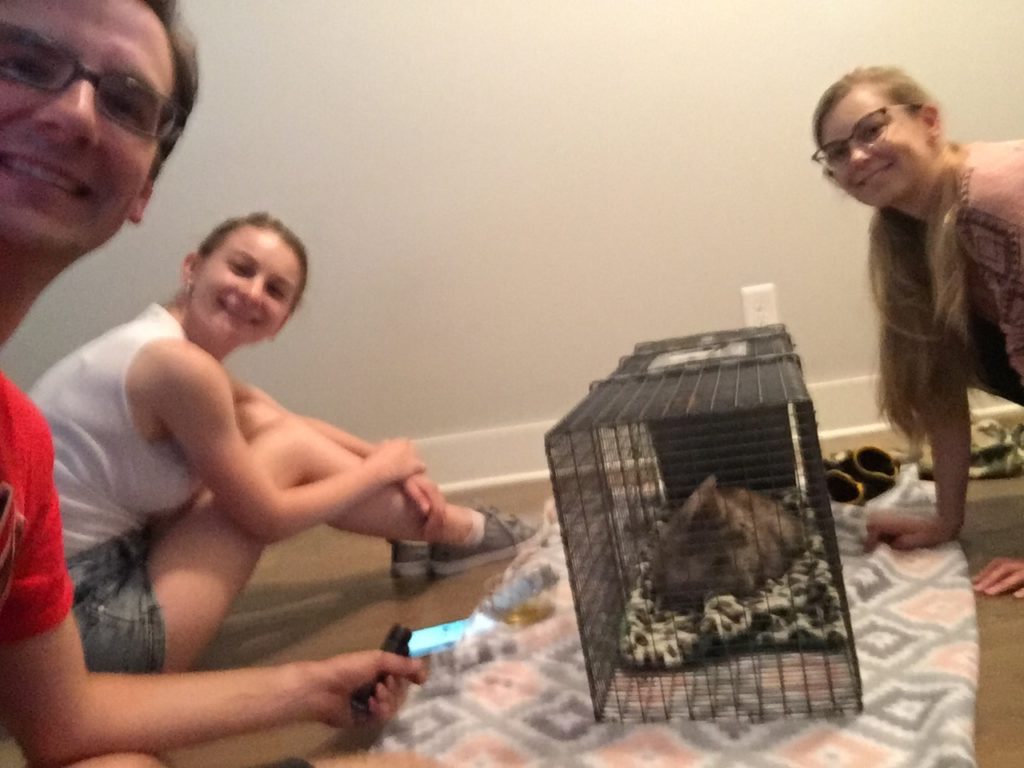 Mama was one of the friendlier cats who didn’t need to be trapped. My sister, Sarah (VMS2) just picked her up and put her in our spare bathroom with a litter box, food, and water. When they checked on her an hour later, the grate covering the AC vent had been clawed up, and Mama was nowhere to be seen.  When I got home from work that day, Matt and Sarah were waiting for me in the driveway. I knew immediately that something was going on. “We have good news and bad news,” they said. “We caught Mama, but she is somewhere in the HVAC system!” That day, we got some good advice about what to do if an animal gets stuck in your HVAC system, which Matt’s grandpa had apparently experienced before and related to us over the phone.  The first thing to do is turn off the AC. Then, put some food next to the vent to try to entice the animal to come out. When this didn’t work, we called the fire department, which was apparently really bored at the time because they showed up with 5 guys and a whole truck. They gave the same advice as Matt’s grandpa. Eventually, we walked around the house looking in every AC vent in case Mama had crawled her way toward a different one.  We finally found her looking up at us out of a different vent. Matt crawled under the house and pushed up on the HVAC piping while my sister and I scruffed her and pulled her out of the top. Only one person, who refused to wear garden gloves while scruffing her, got bitten and had to take prophylactic augmentin (ahem, Sarah). Pictured: Mama looking up at us through the vent (left) and shortly after Mama’s rescue from the vent (right). 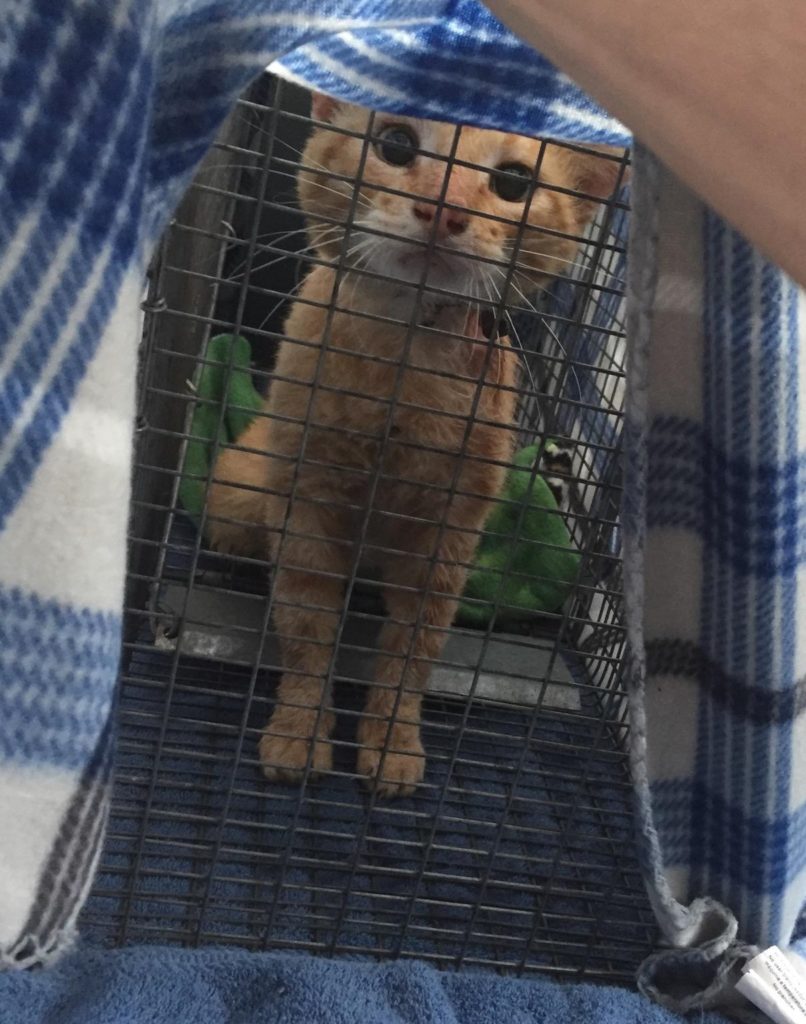 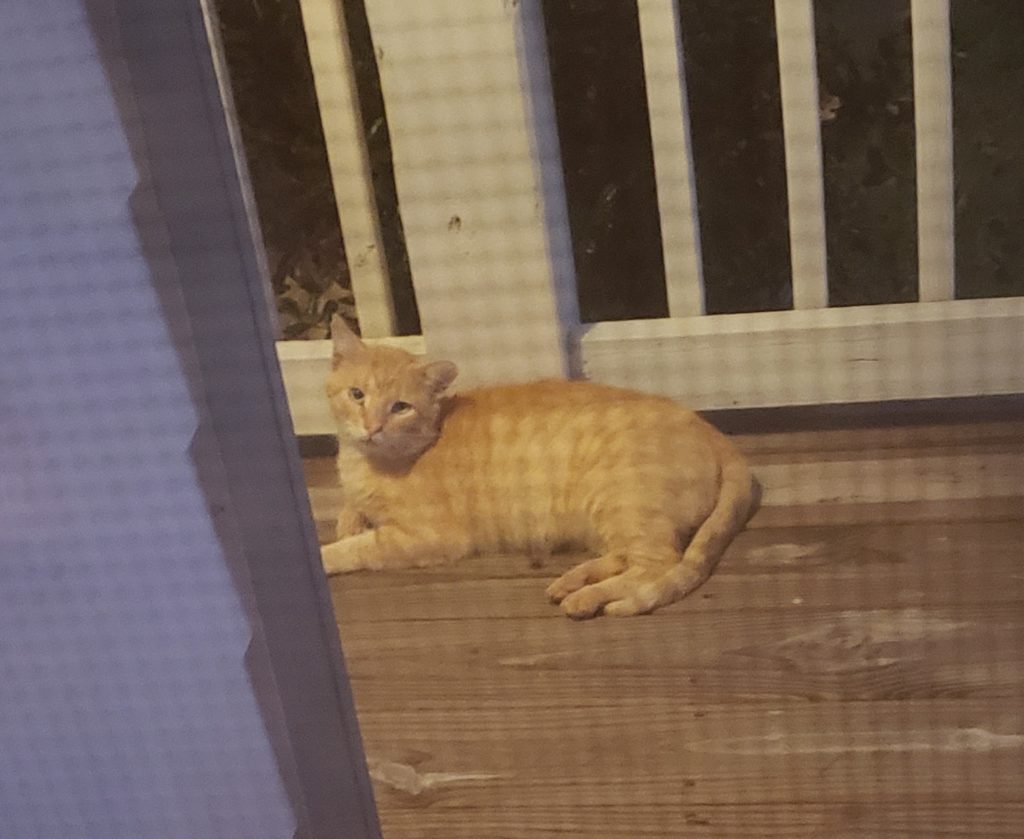 Pumpkin was a cat who came to us with a deep wound on his shoulder/neck area, down to the muscle. When we finally trapped him, we saw that the wound was necrotic and even gangrenous around the edges. The wonderful vets at the Pet Community Center debrided his wound and gave him antibiotics, in additional to the usual neutering and vaccination.  He recovered there for 2 weeks before we released him. His wound is now completely healed (although not as furry as the rest of him), and he’s fat and happy. 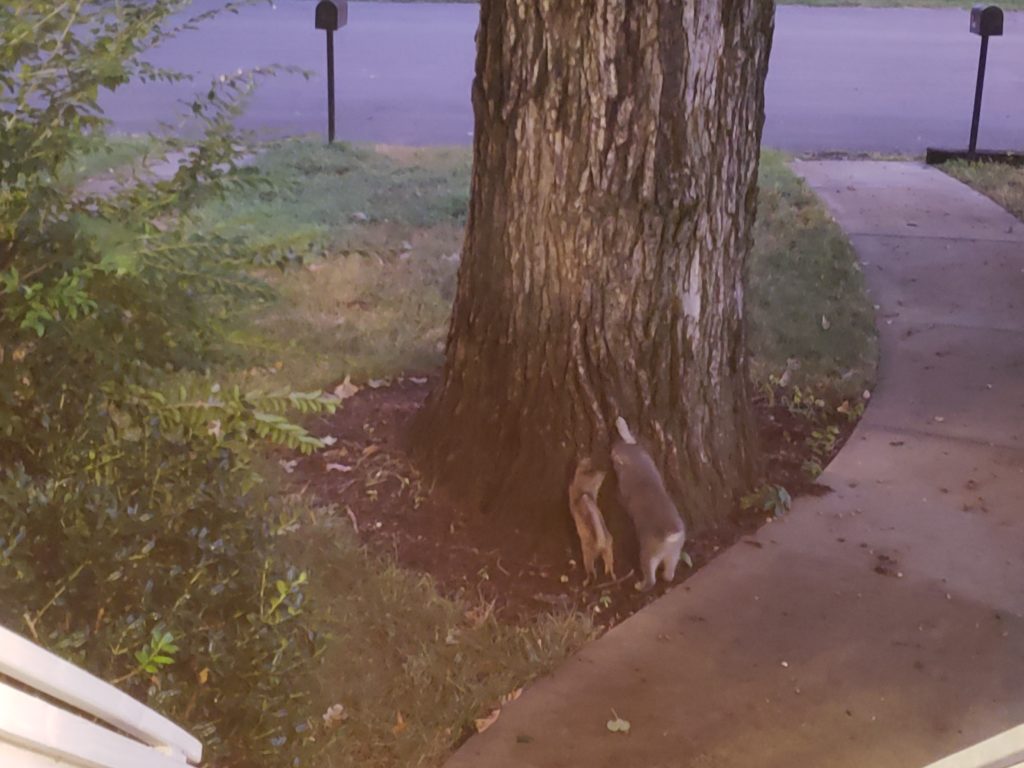 OG Gray Kitty was the first cat we trapped and neutered.  Although he couldn’t possibly be LBK’s biological dad based on the timing of when he was neutered and when LBK was born, he’s been LBK’s ride or die stepdad ever since Mama stopped nursing her and decided to stop hanging out with her too. Gray Kitty and LBK can be seen scratching the tree in the front yard together or playing with each other through the bars in our porch rail. We finally just trapped and spayed LBK. She’ll be back with her BFF in a day or so. 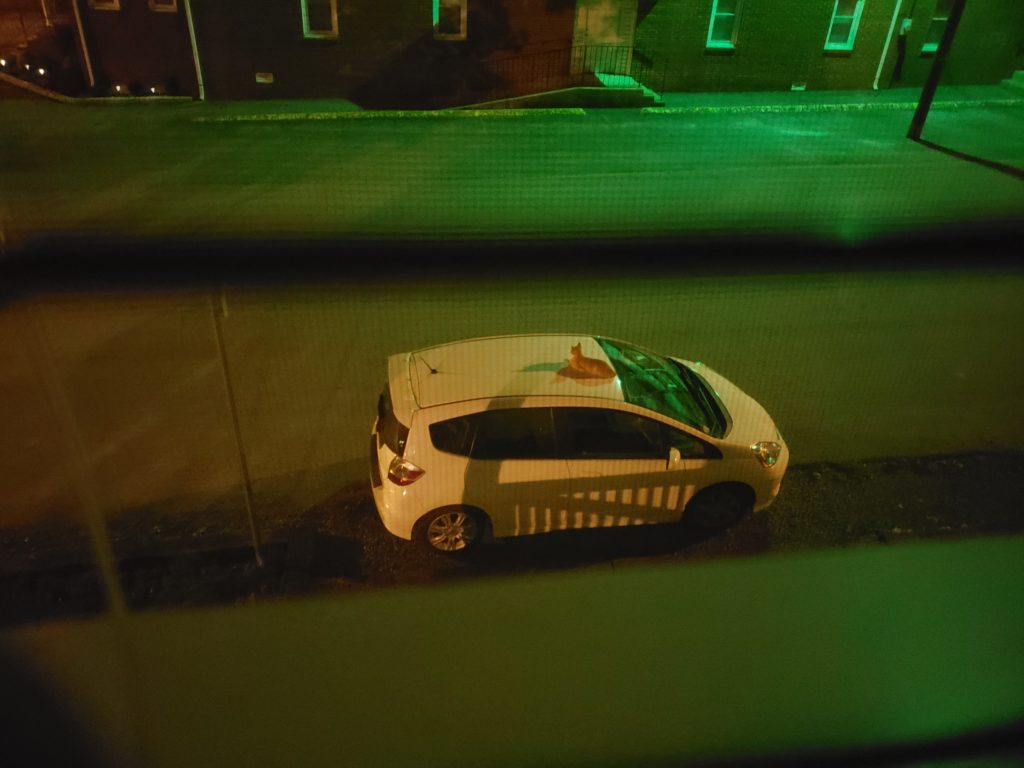 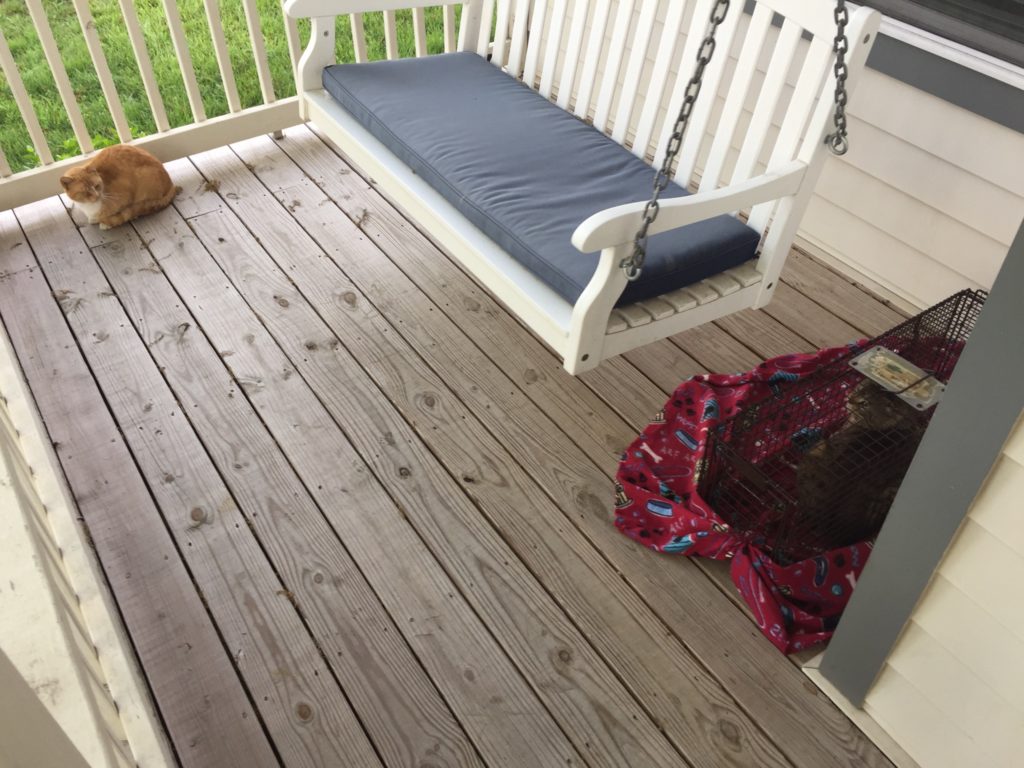 Most Upset About Being Neutered: Frank

Frank took a long time to trap because he was smart about the traps. He taunted us for quite a while, sleeping on the porch swing and even on top of Sarah’s car at night. We think he is the biological father of LBK, although someday when we’re rich we’d like to make a geneaology tree based on cheek swabs of each cat, assuming we can trap them again (this is ~mostly~ a joke). Pictured: Frank sleeping on Sarah’s car (left) and laughing at Rex after he got trapped (right). 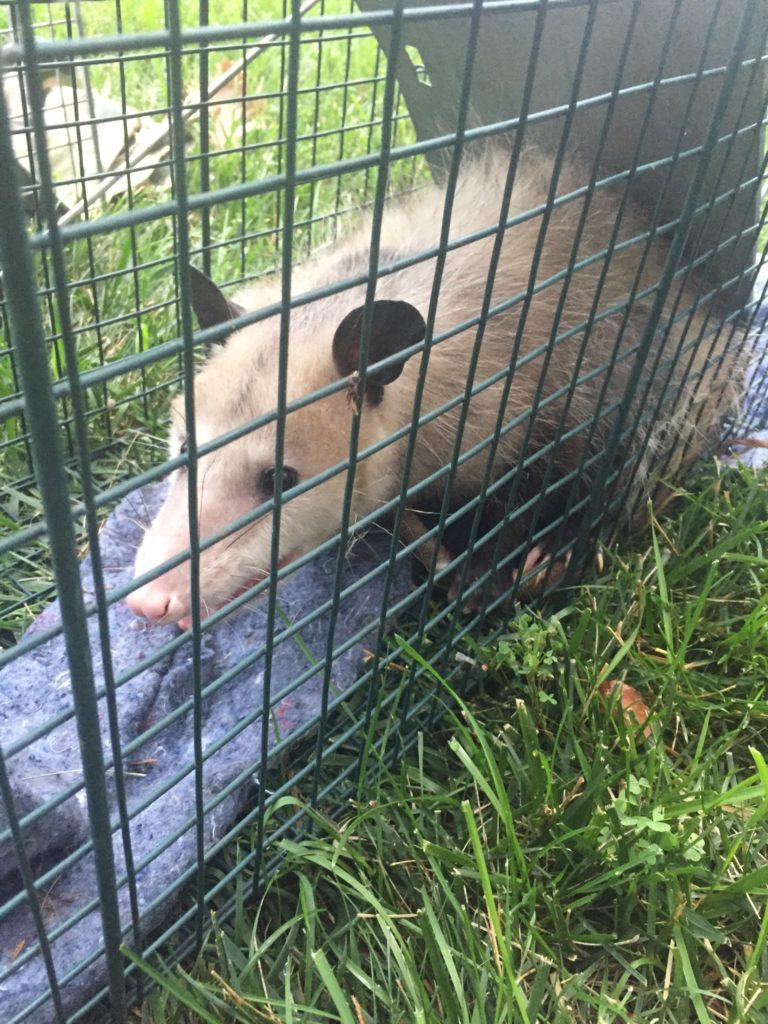 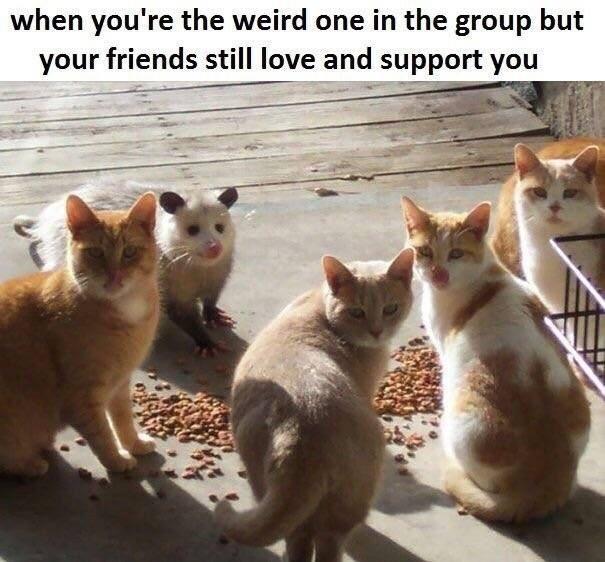 Most Confused About Being Trapped: Opossum

This opossum thought it was his lucky day when he got some free sardines.  He ran under the deck when we let him back out, and we haven’t seen him since.