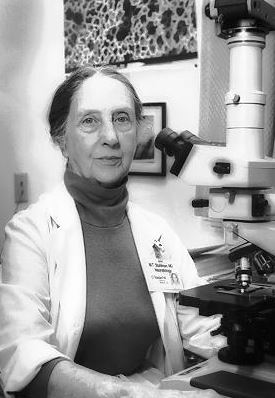 Dr. Mildred Stahlman was born in Nashville, Tennessee. Her father, James Geddes Stahlman, was president and publisher of Nashville’s afternoon newspaper, the Nashville Banner. When she was approximately age 11, Stahlman was given a microscope and soon after determined she would be a doctor when she grew up. Stahlman attended Ward-Belmont, a Nashville finishing school for young ladies, then entered Vanderbilt Medical School in 1943. She graduated in 1946 and served as an intern at Lakeside Hospital in Cleveland, as a pediatric intern at Children’s Hospital in Boston, as assistant resident on the pediatric service at Vanderbilt, as an exchange fellow at the Royal Caroline Institute in Stockholm, and as a cardiac resident at La Rabida Sanitarium in Chicago. She became an instructor in Pediatrics at Vanderbilt in 1951. Two early experiences helped determine the course of Stahlman’s career. The first was a fellowship at the famed Karolinska Institute in Stockholm, Sweden, where she studied pediatric cardiology. It was there, she said, that she became hook on the care of newborn infants. The second pivotal experience was her relationship with Elliott V. Newman, M.D., founder of Vanderbilt’s General Clinical Research Center. Newman persuaded her to do cardiopulmonary research in his division. By 1951, Stahlman was working as an instructor in pediatrics at Vanderbilt and in 1954 received a small grant from the National Institutes of Health to study hyaline membrane disease.

Her initial research was in pediatric cardiology, but her interest in the respiratory problems of premature newborns along with the NIH grant led Stahlman to establish the first modern neonatal intensive care unit in the world. She started Vanderbilt’s Neonatology Fellowship Training Program and has helped train more than 80 postdoctoral fellows from about 20 countries in research and high-risk newborn care. She was also involved in initiating the regionalization program of high-risk newborn care in Tennessee in 1973. Stahlman is a member of the Institute of Medicine and is the Virginia Apgar Award winner from the American Academy of Pediatrics and the John Howland Medal from the American Pediatric Society. She resides on her farm in Brentwood Tennessee, but still remains active in research and consulting.

Sources:
1. The Vanderbilt Reporter: from “Stahlman Named Distinguished Alumna” by Ann Marie Deer Owens, The Reporter, Vanderbilt Medical Center, October 15, 2004 and “Intensive Caring,” by Bill Snyder, The Reporter, Vanderbilt Medical Center, February 4, 2005.
2. http://www.nlm.nih.gov/locallegends/Biographies/Stahlman_Mildred.html
3. From Wikipedia: Mildred T. Stahlman is a professor of pediatrics and pathology at Vanderbilt University. A 1943 graduate of Vanderbilt’s College of Arts and Science, she earned her M.D. at Vanderbilt in 1946 and has spent her entire career at the universityâ€™s medical center.[1]
Stahlman started the university’s first newborn intensive care unit, in order to use respiratory therapy for infants with damaged lungs. In addition, she has researched methods to prevent and treat disease, developed overseas fellowship exchange programs, and initiated the Angel Transport mobile intensive-care unit for newborns.[1] She is an author on more than 100 peer-reviewed articles on neonatal care, focusing on the care of premature infants. Her publications include several papers on ethical and moral issues concerning extreme low birth rate infants.[2]
Stahlman received the American Pediatric Society’s highest honor, the John Howland Award in 1996.
She is the daughter of James Geddes Stahlman, a Tennessee newspaper publisher and philanthropist.