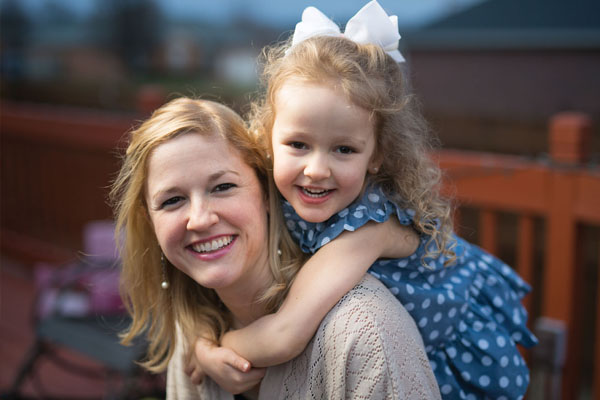 When Rachel Fox was 15 years old, the petite, blonde high school sophomore spent most of her time babysitting in her suburban Nashville neighborhood and practicing the piano.

For about a year, she noticed she was increasingly hungry and thirsty, frequently urinating and losing weight. She battled fatigue as she plodded along with her school work and piano practice. Her symptoms were gradually getting worse, but she didn’t know why. Then, one weekend, she was too fatigued to get out of bed, unable to go to church with her family. Later that night, she awoke, struggling to breathe, and collapsed to the floor at the top of the stairs.

She spent the next week in and out of consciousness in a Nashville hospital as doctors ran tests and tried to stabilize her condition. Before she was discharged, she was diagnosed with type 1 diabetes. It would not be the only time diabetes nearly took her life.

Type 1 diabetes, which used to be called juvenile diabetes, develops most often in young people when the body no longer makes insulin or enough insulin because the body’s immune system, which normally protects one from infection by getting rid of bacteria, viruses, and other harmful substances, has attacked and destroyed the cells that make insulin.

“I remember learning about diabetes in the hospital and thinking, ‘I just want this to be done.’ When I got home, that’s when I realized this was not going away,” Fox said.

Neither diet nor lifestyle impacts the onset of type 1 diabetes. It cannot be prevented and—at present—there is no cure. It is thought to be triggered by genetic or environmental factors or some combination of both.

“We do not understand what causes type 1 diabetes but new efforts are beginning to shed some light on how the insulin-producing cells are destroyed by an autoimmune process. In the meantime, the treatment of type 1 diabetes is improving rapidly with new ways to deliver insulin and measure the blood glucose,” said Al Powers, M.D., professor of Medicine and Molecular Physiology & Biophysics and chief of the Division of Diabetes, Endocrinology and Metabolism.

Powers is also director of the renowned Vanderbilt Diabetes Research and Training Center (DTRC), a NIH-sponsored Diabetes Center that facilitates the discovery, application and translation of scientific knowledge to improve the lives of people with diabetes.

Vanderbilt is doing its part to ease the burden of type 1 diabetes, which affects 1.25 million Americans, including 200,000 youth under the age of 20. Researchers have received more than $11 million in recent grant support aimed at slowing the growing burden of the disease.

The central theme and unifying focus of two grants from the National Institutes of Health (NIH) and one from the Juvenile Diabetes Research Foundation (JDRF) is to improve understanding of changes that occur in the human pancreatic islet in type 1 and type 2 diabetes.

In both types of diabetes, the insulin-producing beta cells in the pancreatic islet are either destroyed or become dysfunctional, leading to insulin deficiency.

Powers, Joe C. Davis Professor of Biomedical Sciences and president of the American Diabetes Association, and his team are collaborating with investigators from Stanford University and the Icahn School of Medicine at Mount Sinai in New York to find out why “juvenile” islets from children grow more robustly than do adult islets.

Islets are highly vascularized ‘mini organs’ composed of multiple hormone-producing cell types and are dispersed throughout the pancreas. It is estimated that adults have about 1 million islets. Because of their rich capillary blood supply, islets quickly sense blood sugar levels in the bloodstream. Their two principal hormone-producing cell types, alpha cells that produce glucagon and beta cells that produce insulin, work as yin and yang to maintain blood sugar homeostasis, Powers explained.

“In type 1 diabetes, the body’s own immune system mounts an attack on insulin-producing beta cells, and, as a result of that, beta cells are lost. What triggers this immune system attack is currently unknown,” Powers said. “The loss of beta cells leads to the development of diabetes.”

Discoveries by the research team have shown that juvenile human islets respond to proliferative stimuli such as glucagon-like peptide-1 (GLP-1).

The Vanderbilt-led grant is one of five recently awarded by the National Institute of Diabetes, Digestive and Kidney Diseases under the Consortium on Targeting and Regeneration, one of four consortia that make up the Human Islet Research Network (HIRN).

A separate Vanderbilt study is aimed at learning whether drug therapy can preserve the ability of the pancreas to continue producing some insulin in newly diagnosed patients with type 1 diabetes.

Vanderbilt is one of 21 institutions cooperating in the study, which focuses specifically on the impact of two drugs: anti-thymocyte globulin and granulocyte CSF.

Researchers have theorized that the drugs used together could slow or halt the progression of the disease and preserve the remaining insulin-producing beta cells, which could lessen the severity of the disease. It could also allow patients to avoid episodes of low blood sugar, another effect that can happen to patients using insulin.

“If this combination of drugs works, the therapy could hold a lot of promise not only for newly-diagnosed type 1 diabetes patients, but also for people much earlier in the disease process, when there is only evidence of autoimmunity, but minimal damage to the beta cells,” said investigator William Russell, M.D., Cornelius Vanderbilt Professor of Pediatrics and director of Pediatric Endocrinology and Diabetes at Monroe Carell Jr. Children’s Hospital at Vanderbilt.

“Even if it can’t reverse the already-extensive beta cell damage, it could make a huge difference by just preserving some degree of insulin secretion, not enough to keep their blood sugar normal without insulin treatment, but much easier to manage,” said Russell who leads the Vanderbilt TrialNet efforts.

Type 1 Diabetes TrialNet is a network of major research centers. Its goal is to find the causes of type1 diabetes and to work toward prevention and early treatment of this disease. Vanderbilt University Medical Center is one of 18 TrialNet Clinical Centers in the United States, Canada, Finland, United Kingdom, Italy, Germany, Australia and New Zealand that receives funding from the National Institutes of Health, the Juvenile Diabetes Research Foundation and the American Diabetes Association, among others.

“The mission of TrialNet is far more ambitious: to prevent the development of type 1 diabetes by halting the progression of the immune attack when it is first identified and before there has been any significant loss of beta cells,” Russell said.

Children with type 1 diabetes are often diagnosed during adolescence—at the same time that they are transitioning into adulthood, testing boundaries and taking more risks. So they are diagnosed at a time when they may be less responsive to dealing with health problems, particularly those that they may not see as an immediate threat to their health.

While their diabetes may not always be on their minds, their phones are usually in their hands. Shelagh Mulvaney, Ph.D., assistant professor in the School of Nursing and Department of Pediatrics, and Kevin Johnson, M.D., Cornelius Vanderbilt Professor and chair of Biomedical Informatics, conducted a study to look at using text messaging to prompt children and teens regarding self-management and medication. Mulvaney led the study of a web-based intervention, YourWay, to improve glycemic control among adolescents with type 1 diabetes with a generic reminder or a motivational message created by the patient.

Technology is also being used to remotely diagnose retinopathy, the leading cause of visual impairment in older people with diabetes. Although retinopathy is not as prevalent in children with diabetes, it does exist, and is often missed during regular follow-up visits with the pediatrician or endocrinologist.

With philanthropic support, the Eskind Diabetes Clinic and the Vanderbilt Eye Institute (VEI) are collaborating to remotely screen for retinopathy in children who have had diabetes for more than five years and are younger than 10. They can quickly and easily have their retinas photographed in the Diabetes Clinic. The RetinaView camera takes the photo, which is then attached to the patient’s electronic medical record and wirelessly sent to Sean Donahue, M.D., at VEI where he interprets the photo and electronically sends the result back to the nursing staff in the Diabetes Clinic.

“We’ve screened over 600 kids now and it’s been stunning what we’ve found in the year we’ve been doing this. In contrast to the reports in literature that say these kids never get diabetic retinopathy, we’ve had two who had prolific diabetic retinopathy and needed urgent laser treatment for impending vision loss,” said Donahue, Sam and Darthea Coleman Professor of Ophthalmology.

“In trying to understand the discrepancy, we discovered the thing that was in common with most of them is they all had poor control of their disease and had multiple ‘no show’ visits to the pediatrician, endocrinologist and pediatric eye clinic. These were the ones most at risk and least likely to be able access to their care.

Rachel Fox, 30, learned she was expecting her first child four years ago. She carefully chose a high-risk obstetrician, knowing that diabetes can complicate a pregnancy. They made daily adjustments in her insulin regimen to maintain tight control while she dealt with morning sickness. Her hard work had seemingly paid off as she neared the end of her pregnancy.

“I knew the consequences of what could happen. For this reason, my entire pregnancy was very closely monitored and everything indicated that we were progressing along fine,” Fox said.

It was not until her actual delivery that she and the doctors were shocked as they discovered her baby had developed to a dangerous weight of 11 lbs., 3 oz., which resulted in a harrowing and heroic delivery to all involved.

Today, Fox’s daughter Hannah is a healthy 4-year-old and Fox is a nurse practitioner, caring for the inpatient diabetic population across three hospitals in Middle Tennessee.

Improving the lives of people with diabetes is a goal she and Vanderbilt share.

“Vanderbilt is one of the leading centers for diabetes research and clinical care and our physicians, nurses, scientists, and nutritionists are working every day and in many ways to understand what causes diabetes, to prevent it and to deliver the very best treatments to those who have it,” Powers said.

A History of Giving

Diabetes care at Vanderbilt entered a new era with the opening of the Vanderbilt Eskind Diabetes Clinic in 2005. The clinic offers comprehensive outpatient care for both adults and children with diabetes, including subspecialty visits, nutrition, social work, and allied health services all under one roof.  <Read More>