Mission of the Program in Cancer Biology

To train new leaders in the field of Cancer Biology that will develop new knowledge that will translate into improved detection, diagnosis, prognosis, prevention, or treatment of cancer. 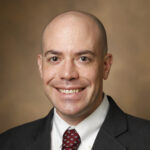 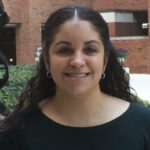 Lizandra Jimenez, PhD.
Dr. Jimenez working in the Weaver lab, carries out exciting research examining extracellular vesicle (EV)-carried miRNAs which have been shown to influence gene expression and functional phenotypes in recipient cells. Many investigators have found Ago2 in EVs, and it is postulated that Ago2 is a major transporter of miRNAs into small EVs (SEVs), such as exosomes. Others have reported extracellular Ago2 that is non-vesicular. She set out to evaluate the effect of growth factor signaling and serum contamination on the detection of Ago2 in SEVs. Wildtype KRAS colorectal cancer cells, DKs8, were conditioned with three different culture media (serum-free DMEM, EV-depleted FBS in DMEM, and Opti-MEM). Ago2 was detected in the same fractions as SEVs in both the serum-free DMEM and Opti-MEM conditions. In contrast, Ago2 was present in both vesicular and non-vesicular fractions in the EV-depleted FBS in DMEM condition. Analysis of SEVs by dot blot showed Ago2 primarily on the inside of SEVs. In a RNase A sensitive assay, she detected select miRNAs inside serum-free DMEM and Opti-MEM SEVs. In contrast, the miRNAs appear to be outside EV-depleted FBS in DMEM SEVs. Since Opti-MEM contains growth factors, she also collected SEVs from DKs8 cells conditioned with serum-free DMEM supplemented with EGF. She did not observe that Ago2 levels in the serum-free DMEM with EGF were altered compared to the serum-free DMEM condition. In summary, multiple factors may affect the ability to detect vesicular Ago2, including serum that may provide a source of extravascular Ago2 and also regulate the trafficking of Ago2 into vesicles. 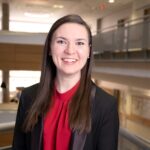 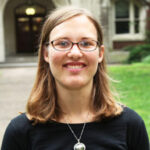 Wendy and Demond are investigating the role of type II IL4 receptor in triple-negative breast cancer brain metastasis in the Fingleton lab. Breast cancer is the second-leading cause of brain metastasis. The cytokines IL4 and IL13 are overexpressed by many human solid tumors. Both are associated with invasive and metastatic phenotypes; IL13 is additionally consequential in primary brain tumors. These cytokines signal through type I (IL4 only) and type II (IL4/IL13) IL4 receptors. Importantly, expression of type II IL4R correlates with poor patient prognosis in basal-like (i.e., triple-negative; TNBC) breast cancer. They have shown that genetic loss of IL4R signaling in tumor cells attenuates lung and liver metastasis in mice. Additionally, they recently identified a role for IL4R signaling in modulating glycosylation in tumor cells. They hypothesize that IL4R signaling influences TNBC brain metastasis at least in part via modulating glycosylation. In a pilot mouse study, pharmacological blockade of IL4R after intracardiac injection of syngeneic TNBC cells resulted in some attenuation of metastatic brain growth and circulating tumor cell burden. They have also observed significant changes in the expression of a sialyltransferase (ST8SIA1) implicated in primary brain tumors and the abundance of several sialic acid-containing protein species in breast cancer cells following treatment with IL4 or IL13. Overall, thier data suggest that IL4R blockade may reduce TNBC brain metastasis, and IL4/IL13 can influence glycosylation in breast cancer cells. Future directions include evaluating the effect of IL4R blockade in combination with chemotherapy in mouse models of brain metastasis and further studies on the functional consequences of altered protein glycosylation after cytokine stimulation.
Wendy recently published an article entitled, “Glycosylation as a regulator of site-specific metastasis,” in Cancer Metastasis Rev. Read the article here.

View our newsletter for the latest faculty and student spotlights, news, and events! 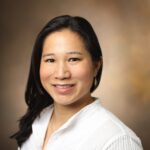 Marisa E. Hom, PhD
Research Assistant Professor Department of Otolaryngology
(Rosenthal Lab)
Dr. Hom received her BS from UC Berkeley in Molecular Toxicology and her PhD from Stanford in Chemical and Systems Biology. Her PhD research focused on small molecule inhibitors of the Hedgehog Signaling Pathway, which is critical for neonatal development, but often goes awry in cancers such as medulloblastoma and basal cell carcinoma. After completing her PhD, she worked as a postdoctoral fellow in Dr. Eben Rosenthal’s lab. During this time, she transitioned from basic science to translational research and clinical trials. In the lab of Dr. Rosenthal, she managed projects and clinical trials centered around molecular-guided surgery and the use of labeled antibodies to help surgeons identify tumor margins and metastases intraoperatively. Here at VUMC, Dr. Hom hopes to develop a more high throughput method for screening antibody-conjugation derivatives in a variety of cancers (head and neck, pancreas, breast) as well as explore other avenues to improve molecular guided surgery, such as technical improvements to imaging devices and exploring other targeted modalities (small molecule, peptide).
Outside of science, you can find her hiking with her dog, skiing in the winter, and going to CrossFit. 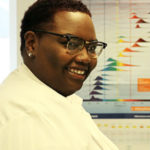 Dominique Parker, BS
Dominque’s research with her colleagues analyzes the role of the non-canonical NF-kB pathway in macrophage phenotype and function in ovarian cancer progression. Ovarian cancer is ranked fifth in causes of cancer-related deaths in women, ovarian cancer has a 5-year survival rate of about 49%. We aim to discover novel therapies by modulating tumor-associated macrophages (TAMs) in the tumor microenvironment (TME). TAMs represent a major population in the TME of ovarian cancer and tend to have a pro-tumorigenic (M2) phenotype which can be repolarized towards an anti-tumor (M1) with certain stimuli. Our goal is to understand and exploit NF-kappaB (NF- B) pathways to modulate macrophage behavior. We hypothesize that activating the understudied non-canonical NF- B (nc-NF- B) pathway in macrophages will worsen tumor progression. We are performing in vitro studies using tumor and macrophage cell lines. Preliminary data show higher levels of nc-NF- B in M2 macrophages compared to M1 or unpolarized macrophages, potentially linking nc-NF- B with pro-tumor effects in macrophages. Our in vivo studies use doxycycline-inducible transgenic mouse models termed IKFM and ALFM that overexpress cIKK (canonical NF- B) or p52 (nc-NF- B) specifically in macrophages. Intraperitoneal growth of TBR5 ovarian cancer cells is used for tumor progression studies in mice. Preliminary data suggest that ALFM mice may have more of an anti-inflammatory phenotype; however, additional analyses are required. Surprisingly, in our TBR5 model, the ALFM mice had significantly reduced tumor weights and lower trending ascites when compared to controls. Tumor sections are being analyzed via co-immunofluorescence. Further evaluation of in vivo samples is ongoing to determine the effects of elevated nc-NF- B on ovarian tumor progression. Our studies will establish whether nc-NF- B represents a new potential therapeutic target in ovarian cancer. 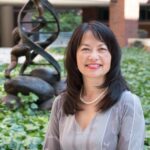 Cathy Eng, MD, FACP, FASCO and colleagues recently published a comprehensive framework for addressing research challenges and patient needs for colorectal cancer in The Lancet Oncology. Their publication gives an overview about the state of the science related to the epidemiology, molecular landscape and treatments for early-onset colorectal cancer as well as the impact of the disease psychological outlook and quality of life on patients. VICC is one of the first institutions in the U.S. to tailor a research and patient support program specifically for early-onset colorectal cancer. Read More.