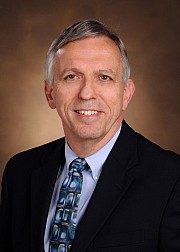 Research Description: The research interests of this laboratory are aimed at the investigation of biological processes involving the synthesis, modification, storage and degradation of certain peptides and proteins using modern mass spectrometric methods of analysis to follow molecular events. In recent years there has been a great amount of interest in investigating the biochemical events involved in the metabolism of peptides, primarily in the brain and gut of mammals, encompassing the enzymatic breakdown of these peptides, their production from peptide and protein precursors, and the disruption of these processes by certain xenobiotics. Modern mass spectrometric techniques are used in these studies, including electrospray and matrix-assisted laser desorption ionization mass spectrometry. This research is generally carried out with two experimental approaches. The first involves in vivo metabolic studies in live animals (rats) using microdialysis sampling procedures together with molecular identification and quantitation by electrospray tandem mass spectrometry. This experimental approach allows us to measure metabolic events that occur in freely moving animals at a level of 50-100 attomoles in the tissue dialysate. Integrated technology for microdialysis/mass spectrometry utilizes quadrupole mass spectrometry (MS/MS) and micro-electrospray ionization (micro-ESI) for very high sensitivity measurements. The micro-ESI source has been optimized to produce ions from the electrospray process at sub-microliter per min flow rates.

The application of combined microdialysis/ESI mass spectrometry is ongoing in four areas, i) Investigation of the kinetics and quantitative aspects of the in vivo metabolism of the neuropeptides and enkephalin neuropeptides, ii) Studies of the kinetics and differential processing of opioid peptide fragment precursors in vivo, iii) Investigation of the in vivo quantitative production and enzymatic degradation of N-acetylaspartyl-glutamate in seizure disorders using a rat model, and iv) Development and measurements of in vivo drug pharmacokinetics, using the drugs haloperidol, valproic acid, cocaine, amphetamine, and the new GABA antagonist n-butyl-3 aminopropylphosphinic acid. The second experimental approach used in the study of cellular peptide metabolism utilizes new molecular imaging technology that is being developed in our lab. This method involves molecular mapping of animal tissue through the production of ion images obtained from the analysis of mammalian tissue slices by matrix-assisted laser desorption mass spectrometry (MALDI MS)12. This technique permits a tissue section to be mapped in multiple molecular weight values, localizing the molecules in an X, Y coordinate representation of the sample. Ion images are produced by repetitive exposure of the sample to the laser beam, where adjacent spots are irradiated, resulting in an ordered array of mass spectra that are keyed to specific locations in the sample. From one raster of the sample, a specific ion image, at any chosen m/z value, could be produced to give the spatial arrangement of molecules of interest. Current work involves; i) Instrument development involving modifications to an existing commercial MALDI (TOF) mass spectrometer, including changes to the laser optics, target movement system, and instrument control hardware and software, ii) Development of methods for sample preparation and target surface modifications to achieve high sensitivity and high image resolution, with molecular specificity, and iii) Applications to specific research areas involving questions about certain spatial distributions of molecules within specific tissues.