Op-Ed: A March for Truth, Reason, and Hope

Posted by vuit_admin on Monday, May 8, 2017 in Life in the MSTP, Nashville, Science Advocacy . 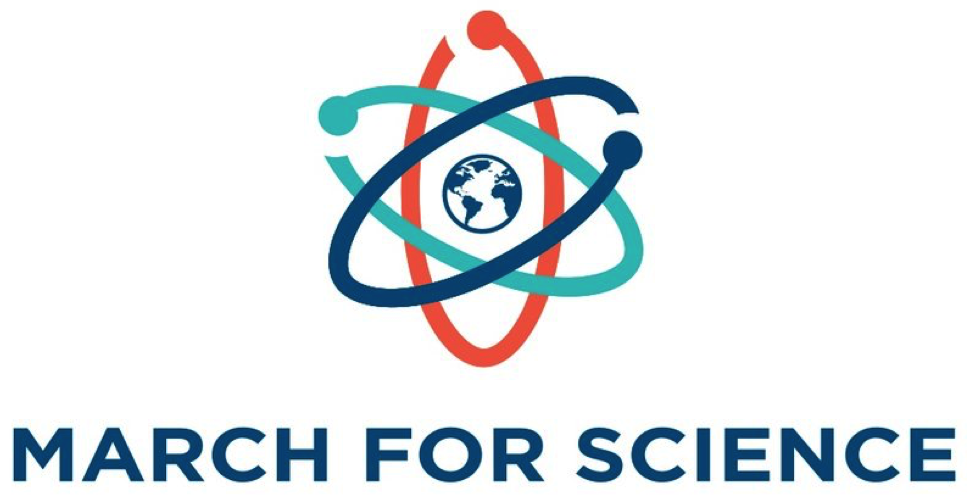 A March for Truth, Reason, and Hope

“SCIENCE NOT SILENCE” “Let us pause for a moment in science” – Some powerful, some quirky, and some punny slogans like these popped up and filled the streets in more than 600 cities around the world on April 22nd.  Scientists and supporters of science stood united on this day, Earth Day, to defend the critical role of science in shaping policy and society. Among the thousands who braved the torrential rains and thunderstorms to march in Nashville were Vanderbilt MSTP and graduate students, as well as faculty. 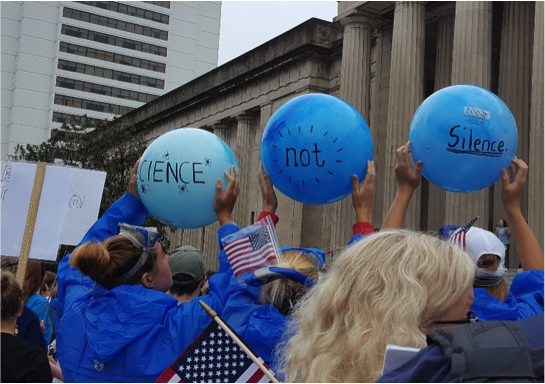 Supporters of climate change awareness proudly hold up their earth balloons during the Nashville rally.

Before the march, the organizers rallied the crowd with the help of several inspirational speakers, among whom included Vanderbilt rheumatologist Dr. Peggy Kendall, immunologist Dr. Mark Boothby, and pediatric infectious disease specialist Dr. Kathryn Edwards. Collectively, they spoke of science’s indispensable role in advancing human health, including how vaccines have eradicated disease, and of the urgent need to fund science to find cures, to seek out truths, and to give hope for the future. Dr. Boothby recounted, “I was asked to step up to the plate by an amazing biology teacher in the Metro Nashville Public Schools system… A lot of times in life, we need just to take on the extra task – ‘Lean in,’ as Sheryl Sandberg put it – take on more rather than feeling overwhelmed and trying to minimize. It was pretty scary waiting to speak to thousands of folks out on Legislative Plaza. One feels, why would it be me? Do I really have a special perspective? But sometimes, the key thing is just for someone to say what they feel. Having so many people gather who care about the positive ways that science influences our lives, society, and world was very inspiring. We can sometimes make the mistake of taking what we seem to be given for granted. But so often, and especially now, it is not a given. We need constantly to work for it, and support for science right now is in just that state.” His words reflected the thoughts and feelings of many others at the march, particularly the sense of urgency and duty to speak up when the validity of scientific inquiry and benefit of research funding are challenged as such. Similarly, Bobak Parang (M4) shared, “I think that the history of science and medicine – from Virchow to Osler to Oppenheimer – shows that scientists cannot and do not exist in a vacuum. However earnestly our community may try to focus exclusively on research, scientific progress has inherent social and political implications. Science and politics cannot be disentangled. And when our community remains quiet, others willingly step into the fold to shout and take advantage. Last year's election was a galvanizing reminder of how important it is to speak up and defend what you value. That's why I marched.” 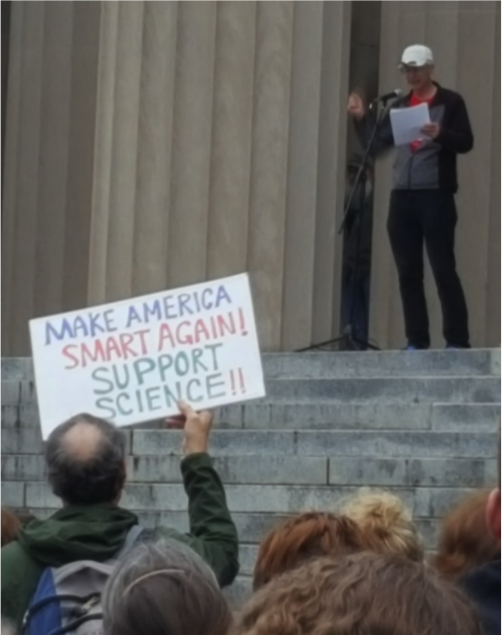 How the first ever March for Science will affect the layperson’s attitude towards science and the crafting of government policies remains to be seen. But it’s a start. Already, Congress has passed a budget that increases NIH funding by $2 billion through the end of this fiscal year. It’s only the beginning, but there is hope out there for reason and for the future – it’s a hope that is worth marching for. So, stay uncalm and march on. 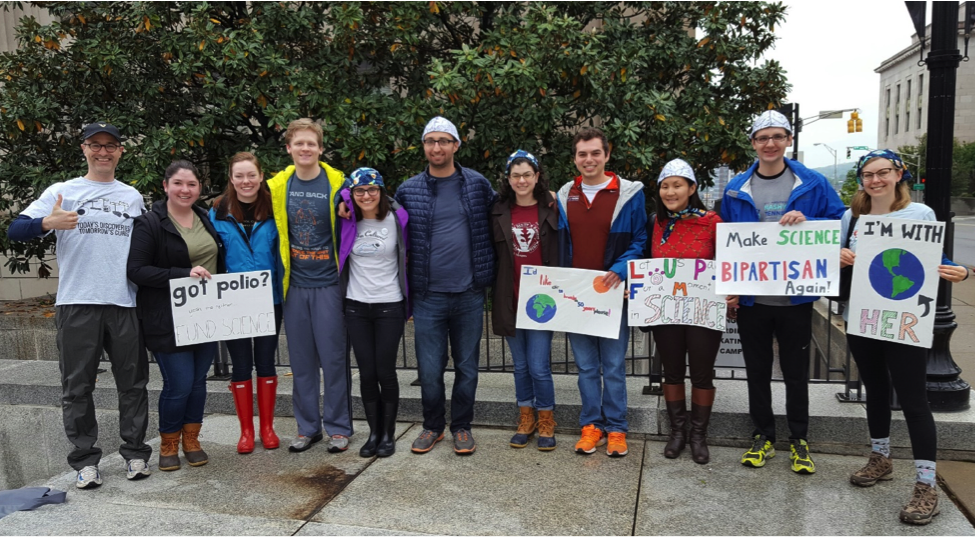 “I marched for science because I wanted to help send a message to policy makers and citizens. I want policy makers to know that we, the scientists and future scientists of the world, are watching their words and actions, and we will applaud evidence-based policy but will vociferously oppose policy made in affront to the best scientific knowledge. I want citizens to know that we are working to advance the frontiers of science to make all of our lives better and that we will stand up for the rational implementation and interpretation of our conclusions. One of the best parts about participating in advocacy marches like the March for Science is acting alongside people from all walks of life for a common cause; I hope to see you at the next march!” – Benjamin Fowler, M1

“I marched for an excuse to talk about science(!) — particularly for the chance to talk with people who aren’t thinking about science daily and who might have questions about what we do and why it’s important.” –MariaSanta Mangione, G3

“I marched to protest cuts to funding for science research and encourage public officials to make policies based on scientific facts and evidence.” – Rachel Brown, M2

“For me, marching was about saying that science, logic, and critical thinking should be at the forefront of what we do as a society regardless of political leanings or philosophical world views.” – Matthew Stier, G4 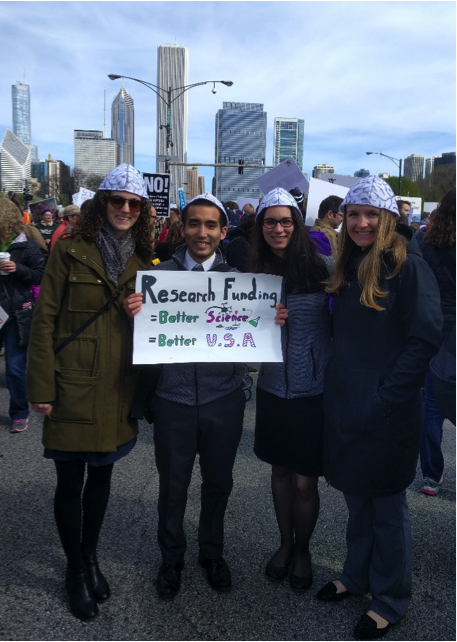 “It was fun to be surrounded by people from all different careers and backgrounds who share a common love of science. The march was uplifting because we were able to take a moment to reflect on everything the scientific method has accomplished and how we can continue to improve. I wanted to show my support of open science and science education.  We should support the free flow of scientific information, and educating the next generation on the scientific method will produce a society capable of weighing evidence to make decisions. Although I enjoyed spending the morning surrounded by science nerds, I think the outreach activities that we participate in (like Mini-MSTP and Day on the Hill) are even more valuable.” – Laura Armstrong, G5

“Statements by many politicians imply a lack of understanding or appreciation for the natural world. Quality research improves society but requires funding.  Basic science matters. I marched to show support for the process of better understanding ourselves and the environment.” – Daniel Kashima, G4 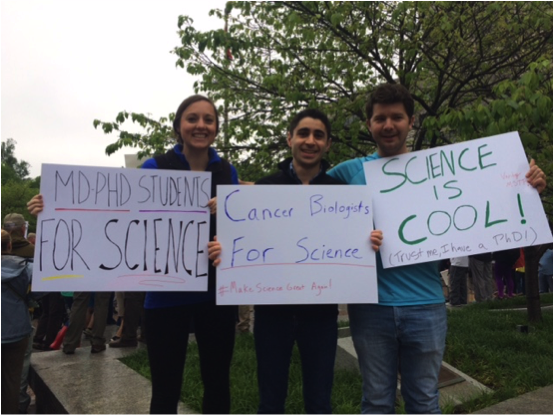 "It was awesome to march on behalf of our city and the scientific community, and the turnout was impressive despite the weather. My motivation for participating was to help promote public awareness of the need for increased support for scientific research.” – Catherine Meador, M4

“Marching alongside my fellow MSTPs was incredibly fun. And marching alongside the larger Nashville community gave me a sense of city pride. At one point, it thundered loudly, and after a brief pause, the crowd erupted into cheers. It was a festive, communal atmosphere, despite the downpour. – Bobak Parang, M4

My experience: “I really enjoyed participating in the March for Science, despite the stormy weather. My whole lab and many family and friends joined me. In fact, a group of labs at Vanderbilt had special t-shirts made for the event, which were printed with the message “Today’s discoveries, tomorrow’s cures” on the front and “Humanity needs Science” on the back. Marching through the streets of downtown Nashville with science advocates, both young and old, underscored the importance of science to our society.”

What motivated me: “My perspective on this issue is guided by my career as a physician-scientist. As a physician, I see first-hand the important gains in medicine that have been made through a long history of scientific discovery. If history has told us anything it is that we can always do better. As the history of medicine has illustrated dramatically, today’s preventive and therapeutic interventions can soon become antiquated by new approaches revealed through careful inquiry. The scientist in me is driven by the desire to create new knowledge in the pursuit of finding answers to today’s critical medical problems. In addition, my particular field is infectious disease. This is a discipline that depends on active, current scientific research because we need to deal with the emergence of entirely new diseases (or the reemergence of diseases that were once under control). Also, because pathogenic microbes develop resistance to our current therapies we need a constant churn of research and development to identify novel drug targets and new agents.”

Message for medical students: “Medicine is a dynamic discipline, reflecting the major impact that research has on our preventive and therapeutic approaches. As physicians, we have a strong obligation to create new knowledge that will improve the lives of our current and future populations. Sometimes the best way we can promote the health of our community is by advocating for their best interest. Standing up for science and for public investment in research and discovery, such as we did on April 22nd, is one small but important way that we demonstrate leadership in this area.”

Message for the public: “Modern medicine has extended and improved the human condition for many years, in large part because our society invests heavily in research. My participation in the March for Science on April 22nd was motivated by my desire to send a clear message to our government leaders that investment in discovery is critical to discovering new and better ways of improving human health.”

Disclaimer: The viewpoints expressed by the authors do not necessarily reflect the opinions, viewpoints and official policies of Vanderbilt University.