Posted by fettigma on Thursday, January 31, 2019 in Alumni, Director's Corner . 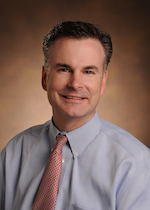 As Vanderbilt MSTP trainees know, our own MSTP Director, Dr. Chris Williams, graduated from the Vanderbilt MSTP in 2002. Thus, we decided that an official Alumni Profile of Dr. Williams was long overdue. I sat down with Dr. Williams to ask him more about his training path, life as a physician-scientist, and advice for trainees. Despite being a member of his lab, even I learned a lot about Dr. Williams from this interview.

He earned his B.S. in Chemistry from Brigham Young University in Provo, Utah. Following graduation, Dr. Williams worked as a Research Assistant to two physician-scientists at the University of Utah in Salt Lake City, where he spent his free time mountain biking and rock climbing and met his wife, Emily. Dr. Williams then matriculated into the Vanderbilt MSTP in 1994.

He recalls that when interviewing for MSTP positions “…the Vanderbilt MSTP gave us a lot of opportunities to interact with current students, who were very open about the program. They seemed to be very satisfied with their training experience and, importantly, very supportive of each other. Of course, Vanderbilt was also (and still is!) a terrific medical school with outstanding research opportunities. It was impressive that students were able to get a really high-quality education and still maintain lives outside of training. Another thing that singled Vanderbilt out from the other schools was that the MSTP and medical/graduate administration was very supportive of alternative entry pathways to the MSTP and had a desire to tailor each students’ learning experience to their goals.”

At Vanderbilt, he completed his doctoral thesis in the lab of a gastroenterologist-scientist, Raymond DuBois, M.D., Ph.D. Dr. Williams’ thesis centered on the effects of non-steroidal anti-inflammatory drugs (NSAIDs) on colorectal cancer growth. This piqued his interest in gastrointestinal (GI) biology. He chose to become a gastroenterologist because he enjoyed the physiology and GI pathology, he knew that he liked working with his hands so he wanted to be a proceduralist, and he felt that his “quirky personality” fit right in (his words, not mine!).

“I had identified a place that really wanted to mentor me throughout my entire physician-scientist training and career,” Dr. Williams says. “At Vanderbilt, all of the Division Chiefs are physician-scientists, and I had a very supportive Division Director in gastroenterology. Also, at the time, the Harrison Society was only three years old, and it was a very unique program.” In addition, he knew that the clinical training was “top-notch” and that Vanderbilt was nationally known for having a strong GI research group with a Digestive Disease Research Center, GI SPORE in colon cancer led by Bob Coffey, and multiple GI program project grants.

As a fellow, Dr. Williams studied the role of MTGR1, a transcriptional regulator, in the pathogenesis of inflammatory bowel disease. He became an Assistant Professor of Medicine in 2007 and an Associate Professor in 2014. In 2014, he was also chosen to serve as the Director of the Harrison Society. After two years of mentoring PSTP trainees, he became our MSTP Director. At this time, Dr. Patrick Hu assumed the role of Director of the Harrison Society. Dr. Williams and Dr. Hu continue to work closely in training physician-scientists at the graduate, predoctoral, and postdoctoral levels. For instance, they partnered to form the Vanderbilt MSTP Associate Advisor program so that PSTP and MSTP trainees could interact and learn from each other on a weekly basis.

When asked if he thought he would ever become an MSTP Director, Dr. Williams says, “No, but I was honored when I was given that opportunity. It’s been highly rewarding, but with some challenges. It is the next steepest learning curve to when I was an intern. It’s not the student interactions; it is all of the institutional commitments that I’ve added to my schedule. However, I’ve been very fortunate to have built relationships with excellent colleagues during my time at Vanderbilt. I appreciate the immense degree of dedication that the Vanderbilt leadership and faculty, from Dean Balser to the Department Chairs, commit to training and supporting physician-scientist, medical, and graduate education at Vanderbilt.”

Dr. Williams currently spends most of his time writing grants, working with his lab members, and working on MSTP business. His clinical time has always been closely partitioned, a result of strong divisional leadership and support of many full-time clinical faculty. He spends a half day per week performing endoscopy (upper endoscopy and colonoscopy) at the Veteran’s Administration (VA) and attends on the Gastroenterology consult service at the VA.

“I really value taking care of patients,” says Dr. Williams. “It is extremely satisfying to do a screening colonoscopy, find a large polyp, completely remove it, and know the threat of cancer has been removed from that location. The hardest part of my job (on the clinical side) is performing a screening colonoscopy on a patient who should have been screened earlier in life and discovering a large mass that is likely malignant—then gathering the patient and their loved ones in the room and informing them of a diagnosis that will change the rest of their lives.”

When asked about his most impactful training experience, Dr. Williams says he can’t identify just one: “It has been a continuum; each stage of my training prepared me for the next stage of my career. For example, in graduate training, passing quals prepares one to think critically to identify gaps in the literature, form hypotheses, plan experiments, and defend ideas and concepts. All lessons useful in the scientific pursuit. On the clinical side, intern year teaches you to think quickly, learn disease progression, identify really sick patients, work efficiently, know your clinical limitations and get advice/help,” he says.

“There aren’t many things I wish I had done differently, but I do wish I could be more directly connected to the bench,” Dr. Williams remarks. “For instance, Jim Goldenring, a colleague in the Surgical Research Program and a Goodpasture Faculty Advisor, still maintains a bench presence.”

Dr. Williams’ other passion is spending time with his family. He and Emily have five children. His oldest daughter, McKenna, is a graphic artist and photographer, is married, and lives in Thompson Station 25 minutes away. His son, Caden, spent one year at West Point and is now serving a mission for the Mormon Church. Haley is a senior in high school who plans to attend Brigham Young University for college this fall. She’s a people person and loves teaching. Ava is a sophomore in high school who is very interested in research and plans to work in a lab this summer. Dr. Williams’ youngest daughter, Emerson, is in fifth grade and is “very precocious.” Their favorite family activities include boating, games, jigsaw puzzles, and traveling. They also have a family tradition of going to Rosemary Beach in the panhandle of Florida. Every year, they pick up the kids on the last half day of school with the car loaded up and drive straight down to the beach for a week.

“Overall, this has been an extremely rewarding career that was entirely worth the long training process. I love working with students, and I have full confidence you will all be successful in your careers,” he says. Dr. Williams’ office door is open for meeting with students and trainees. He would be delighted to meet to discuss his thoughts on physician-scientist training and share other stories!