A Quick Guide to Housing in Nashville 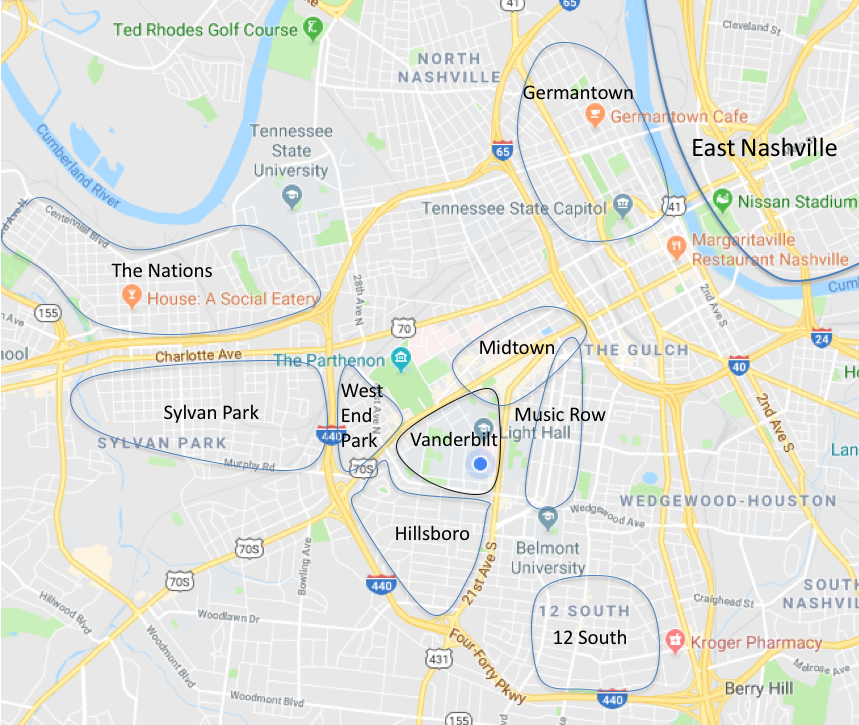 The above map of Nashville highlights some of the areas where students commonly live. Read on for some information about a few of the more popular areas. The Nashville Guru (http://nashvilleguru.com/neighborhoods) is also an awesome website to get a more thorough look into each area!

Walking distance from campus
There are a number of neighborhoods to choose from in the peri-Vanderbilt area. Many students especially appreciate being close to campus in the first two years of medical school when there isn’t much flexibility in your schedule. You can walk to campus in under 20 minutes from most places in Music Row, Midtown, Hillsboro and West End Park, but some choose to bike or have a very short drive in from these places. Nashville is actively trying to become a more bike-friendly city and many students commute by bike, but there aren’t yet bike lanes everywhere. This site has most of the bike routes well mapped: https://www.walkbikenashville.org/maps. Prices are going up in most of these neighborhoods, as is true for most of Nashville; however, there are still plenty of affordable options on our stipends! Having roommates will obviously reduce cost, but it would still be manageable to live alone in some places.

Germantown
In my biased opinion, Germantown is the best neighborhood in Nashville. This neighborhood stands out for its truly world class dining experiences: Rolf & Daughters, Henrietta Red and City House are truly awesome restaurants that you must try for a special occasion or when someone else is paying the bill. However, as an MSTP student, you won’t have the extra cash to enjoy those world class spots on a regular basis. Good news: there is much more to do than just eat fancy food. You can eat less fancy yet tasty food at Big Al’s Deli (which is the best Meat’n Three in town) or have a fantastic boba at Ying Yang Tea. In my free time, I enjoy riding my bike on the Nashville levee greenway using the Nashville bike share program (which is closed right now due to COVID), reading lots of papers at Steadfast Coffee, and enjoying a pint with friends at Nashville’s best brewery (Bearded Iris). Additionally, the Nashville Sounds Stadium, the Tennessee State Museum, and Farmers Market are all within walking distance. A neighborhood with great food, outdoor space, and Triple A baseball– what’s not to love? (By Bradley Reinfeld, G4)

12 South
First of all, 12 South is by far the best (sorry Brad). 12 South is a fun, young neighbourhood just 1-2 miles from campus. Currently it is mostly houses with young families or groups of college/graduate students, but there are seemingly infinite apartment buildings opening up all the time. The 12 South neighbourhood centers around 12 South avenue, which has tons of restaurants, shopping boutiques, and coffee shops. The food is excellent and ranges from BBQ, to sandwiches, to Korean food trucks, to upscale Lebanese. It also is home to one of the Jeni’s Ice Cream stores, which Nashville is obsessed with. The shopping is amazing but expensive, so I would recommend some serious window shopping. You might even catch Reese Witherspoon at her 12 South store: Draper James (note: she looks EXACTLY the same as she does on screen). The coffee shops make for great study spots and include some Nashville favorites: Frothy Monkey (always busy, super trendy, excellent food, Bachelorette parties galore for Brunch on Sundays) and Portland Brew (great study spot and solid patio for when it’s nice out). Also my classmate and neighbor Chris would never forgive me for not mentioning 8th and Roast, which is where he basically lives. Overall, 12 South has a very homey feel – it’s extremely safe and there are always people walking around (usually with dogs), going on runs, or going to Sevier Park, which is a beautiful park at the end of the 12 South with basketball courts, tennis courts, a playground, the community center, and sprawling grassy hills to hang out on. Beware of sunbathers, frisbees, hacky sacks, slack lines, and puppies. It’s also really close to 8 South, which is an up and coming area with a million apartments, new restaurants, and a great tap room.

Let’s talk cost: many of the apartments going up are looking for either young, urban professionals (aka YUPies) or undergrads (mostly from Belmont University, which is two blocks away). That means there’s a huge spread of what you can get. This is one of the priciest neighborhoods in town, but there are affordable options, particularly renting a room in a house or sharing an apartment. The lowest you can get is probably around $1000 for a 1BD/1BR or studio, but it wouldn’t be a new building. More likely is >$1,300/month. But you pretty easily can find <$1000 per person if you’re willing to share a multi-room apartment or a house. 8 South apartments would be cheaper, but not by much. (By Lizzie Hale, G4)

The Nations
I moved to a house in The Nations with my significant other when I started graduate school. Driving to Vanderbilt between 7:30 am and 9:00 am for graduate school is about a 15- to 20-minute commute. Coming in earlier for clerkships is about a 10-minute commute. I love having a small yard, covered parking, and a guest room. My parents purchased the townhouse (and we essentially rent it from them); if you aren’t planning on buying, you could still live in The Nations in a small house like ours with roommates. Another option is the Flats at Silo Bend Apartments, a brand-new apartment complex in the Nations with lots of amenities (i.e. a gym) that’s a little more affordable than similar apartment complexes on Charlotte Ave. It’s also walking distance from several different coffee shops that are great for studying (Ugly Mug, Frothy Monkey, Red Bicycle, and White Bison). I love living in The Nations because it is home to some of the coolest murals in Nashville and trendy restaurants like Nicky’s Coal Fired that don’t have long waits (unlike restaurants in other trendy parts of Nashville). El Paseo is a restaurant with its own dog park in front, which is fun for people who have dogs AND people who just want to dog-watch while they eat. (By Rachel Brown, G4)

East Nashville
I moved to East Nashville when I started graduate school. It’s a totally different vibe than around Vandy’s campus! My house is about 6 miles from campus. Coming in between 8:00AM – 9:00AM for graduate school is about a 20- to 25-minute commute. Coming in earlier for medical school would be about a 10-minute commute. East Nashville is home to a huge variety of restaurants – some of my favorites are Mas Tacos, and Pharmacy Burger. It’s also near Shelby Bottoms Greenway, which is a 960-acre area with bike paths, hiking trails, a golf course, and a great dog park. My favorite music venue in Nashville, The Basement East, is located right off Gallatin Pike, the main road in East Nashville. Finally, we have our own yearly beer festival, tomato art festival, and several smaller events. Several neighborhoods in East Nashville are “up and coming,” with brand new but affordable houses to buy if you’re looking into making a real estate investment during your 7 years here. (By Cody Stothers, G5)