Celebrating the Life of Zachary Jones (G2) – by

Posted by samuelb1 on Thursday, September 30, 2021 in Uncategorized . 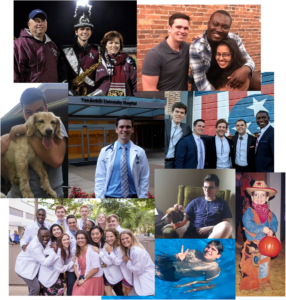 “The only truly dead are those who have been forgotten; for if you are a good person, even after death, your grave is loved” -African proverb

The past couple of weeks have been especially difficult for many of us. In that time, we have found ourselves mourning the loss of a friend, brother, colleague, and classmate. Many of us chose to become members of the Vanderbilt MSTP family because we realized that within this program, we would find another family away from home–one of our own choosing. The downside then is that when death sneaks in like a thief in the night, and makes away with one of us, the pain threatens to break us.

Over the past days, I have tried to put into words the person that Zach Scott Jones was to me, and more than that, what he meant to me. If my struggles are anything like yours, then you know how difficult it is to sum him up in just a few paragraphs. Zach became my family for the first time when he, like 13 other bright-eyed and excited young folks, joined the VUSM MSTP incoming class of 2018. Over those first few weeks, we learned about the long journey ahead of us, and how much we would need to depend on one another if we were going to make it through. As a group, each of us had our well-known peculiarities and characteristics. I was the loud one always able to turn anything into a dirty joke, and Zach was the quiet one, quick with a smile (seriously, have you met his dimples?), and eternally chagrined at my ‘colorful’ quips. We really couldn’t be more different.

To make navigating this path easier, we got to be chosen by our “bigs” effectively creating another family unit within the MSTP family. I was fortunate and blessed to have been picked, alongside Zach, by the GOAT Nowrin. And so, Zach became more than just my friend, he became my brother; a very unlikely pairing if you ask me, and for that I’ll always be grateful. To hear Zach tell it, we were monozygotic twins, and he would loudly tell that to anyone who would listen. Of course I demurred, at best, we were dizygotic twins. I mean, there is so much that is different between us. While I can be quite impatient, Zach is the epitome of patience, at all times (unless you ended up riding with him in that mustang of his), with everyone. I can hold a grudge forever, but Zach could never manage to be angry with anyone for longer than an hour. If anything, he made excuses for why people acted the way they did; I just loudly proclaim that people are terrible and will always be terrible. Zach believed there was goodness in everyone. More than all that, his unbridled optimism and upbeat approach to life could not have irked me more. But that was Zach for you…and our ‘-zygosity’ debate is one that we will never get to settle.

Zach loved in this deep and meaningful manner that made anyone around him feel seen. His empathy and kindness knew no bounds. Someone described him as an enricher, and I agree that that word really does highlight who he was to many of us. Yes, he was shy and liked to fly under the radar; well he managed that until he opened his mouth either to smile at you (again with those dimples), or talk with/to you. When he did, you quickly realized the extent of his intelligence, emotional and otherwise. Zach didn’t speak much more than he had to, but he missed very little. He was attentive to everyone around him including his friends, family, and patients. He always seemed to know when we needed him, and was always there to make sure that we were okay.

These past 18 or so months have been so hard on many of us. I know they have been especially hard for my class; delayed clerkships, delayed board exams, delayed entry into graduate school, and most of all, prolonged separation from our support networks. It was always bound to be hard. But they were especially difficult for Zach, who like many of us, sometimes expected so much more from himself than he would from anyone else in the same position. For a few months, that smile slipped just a little bit. But over these past few months, after he started grad school and joined the Byndloss lab, he once again became the Zach we all knew and loved. A few days before his passing, Zach came out with us to the symphony, and I remember the last conversation we had laying on blankets listening to the orchestra…well only partly listening (sorry Xavier). I knew he was back. Zach was happy, he was upbeat, he was hopeful, he was patient, he was excited, and above all, he was optimistic to that irksome level I have come to associate with him and him alone. That is the Zach I will always remember; the one who told me that we would all be okay.

We have lost a rare gem. To paraphrase one of my classmates, “The greatest people you will ever meet has just lost one of its greatest”, and we won’t soon forget him. We can’t, not even if we wanted to, because he made it impossible to ever forget him, simply by being Zach. Zach walked into our lives, made a home in our hearts, and in leaving us too soon, left a big hole where his brightness used to be. The journey may never be the same, but in the depths of our sorrow, I can almost hear Zach whispering in that charmingly nonchalant way of his: “Happiness can be found, even in the darkest of times, if one only remembers to turn on the light”. Go on brother, rest now, we’ll take care of one another, and eventually, we’ll be ok.