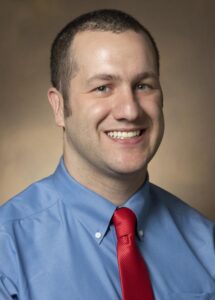 Dr. Jean-Nicolas Gallant, M.D., Ph.D. is a 2019 graduate of the Vanderbilt University MSTP and is currently a fourth year in Vanderbilt’s Otolaryngology residency program and a Sutherland-Watkins Associate College Advisor. He is from Montréal, QC, Canada, and he attended Amherst College, where he majored in Anthropology and Chemistry. He then worked as a research assistant in Dr. Wafik El-Deiry’s lab for three years studying therapeutic targets for the treatment of colorectal cancer prior to joining the Vanderbilt MSTP in 2012. I had the opportunity to talk to Dr. Gallant and learn about his journey in medicine so far, his translational research work in Dr. Vivian Weiss’s lab, and his advice for current MSTP trainees.

Journey in Vanderbilt MSTP
Having worked with Dr. El-Deiry, an MD-PhD medical oncologist, during his gap years, Dr. Gallant initially aspired to be a physician-scientist in medical oncology when he started his first year in the Vanderbilt MSTP. He enjoyed learning about cancer in the preclinical curriculum, and he rotated in several medical oncology labs before joining Dr. Christine Lovly’s laboratory, where his dissertation focused on EGFR rearrangements as therapeutic targets in lung cancer. When Dr. Gallant was in the program, students did their clinical year following their PhD, so he sought more clinical experience during his time in graduate school. He initially spent a lot of time with medical oncologists in the clinic and in the hospital, but he soon realized that, while the field of oncology interested him, he missed the hands-on sort of tasks that he’d grown to love in a basic science lab, and he craved being able to have a more tangible, immediate impact on patients, so he sought out experiences in several different surgical oncology fields. He worked with Dr. Idrees in general surgical oncology, Dr. Brown in gynecologic oncology, Dr. Thompson in neurosurgery, and Dr. Rohde in ENT. When asked what ultimately made him choose ENT, he recalls a particularly challenging surgical case with Dr. Rohde that involved resecting a tumor off of the hard palate and using a part of the patient’s thigh for reconstruction. He was drawn in by the intellectually and technically challenging procedures and the opportunities to pursue surgical oncology in head and neck cancer, but what ultimately sold him was the people he met in the specialty. Although surgical residencies are not one of the traditional training pathways pursued by MD-PhDs, Dr. Gallant said that he felt supported by the Vanderbilt MSTP and the way that Chris Williams, MD, PhD liberalized what MD-PhDs could be after becoming director of the program. Dr. Gallant ultimately choose to stay at Vanderbilt for his residency training given the strength of the VUMC Otolaryngology and Head and Neck Cancer program and culture of the institution and the people.

Residency and Becoming a Surgeon-Scientist
Dr. Gallant is currently in his fourth year out of five of ENT residency, and, after his general training, he plans to specialize in Head and Neck Surgical Oncology, which involves a 1 year fellowship. Dr. Gallant ideally hopes to complete fellowship at another institution, noting that it is important for surgeons to learn new technical skills at different academic centers. ENT residencies have anywhere between 3 months to 2 years of protected research time, and the Vanderbilt program has 6 months. For this time, Dr. Gallant worked in Dr. Vivian Weiss’s MD, PhD lab, which focuses on thyroid cancer research. There he developed a thyroid cancer cell line using CRISPR-Cas9 that he plans to use in his research program in the future. Coming into the MSTP, he was pretty sure that he wanted to pursue an academic career—his dad and brother work in the pharmaceutical industry, so he had enough exposure to that career to think about it and rule it out for himself. Right now, Dr. Gallant envisions a 60-40 physician scientist career, with 1 day of clinic and 1 OR day focused on a narrow population/clinical practice (he is thinking of focusing on pediatric thyroid cancer right now), with the rest of his time focused on translational research using tumors from patients and mentorship.

Work-life Balance and Advice for Current Trainees
When he is not busy in the OR or in the lab, Dr. Gallant tries to spend as much time as possible with his wife, who is an engineer, and his three young kids, Brigitte, Arthur, and Marie. When I asked him how he is able to balance family time with work, he says that the thing that works best for him is being really intentional about putting everything, even things like his kids’ soccer games and date nights, on his calendar in advance so that he does not miss this time. Personally, he also finds it very helpful to have a partner who does not work in medicine who is able to ground him when work becomes too stressful or busy.

In Nashville Dr. Gallant loves eating food at restaurants on Charlotte Pike and Nolensville Pike with one of his favorites being VN Pho & Deli. He and his family are also frequent visitors at the Nashville Zoo (he claims he easily knows the zoo by memory by now) and grabbing a beer at Bearded Iris (the Charlotte Pike location, but he could be convinced to try the Germantown one).

Dr. Gallant’s biggest piece of advice for current trainees is to not put life on hold while waiting for the next stage in training—this is a long journey and there is never a perfect time for anything, so don’t let your career prevent you from doing the things that are most important to you. In saying this, Dr. Gallant acknowledges his privilege as a cis white male in making this happen but hopes that we can all find time and space to do the things we love. He also recommends talking to upper year students as much as possible, especially prior to picking a PI and before other important transition points.

Finally, Dr. Gallant is an associate advisor and is happy to talk to or mentor anyone in the MSTP. His surgical schedule precludes him from meeting during regular work hours, but he is always happy to meet in the early morning or in the evenings to talk about ENT, being a surgeon-scientist, work life balance, or anything else that you have on your mind. Feel free to email him!