Posted by vuit_admin on Tuesday, November 29, 2016 in Life in the MSTP, Student Spotlight.

To remain engaged in science while completing my first year of medical school, I began to follow journals, prominent scientists, and science organizations on Twitter. Through Twitter, I was able to complement my lectures about autoimmune disease like Ankylosing Spondylitis  with the latest trials published using monoclonal antibodies against IL17a antibodies. When I changed my Twitter from following sports teams to science, I never predicted that it would allow me to have a once in a lifetime opportunity.

During my most recent summer lab rotation, I was conducting a qPCR experiment and this tweet came across my feed. 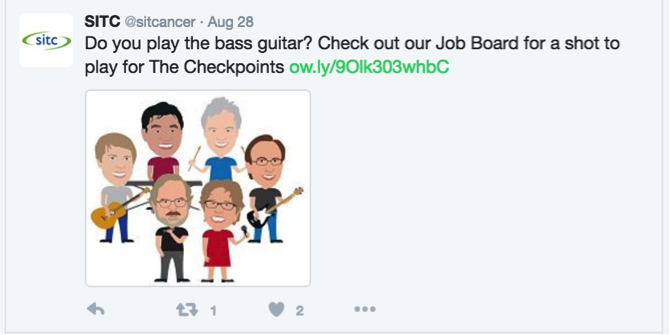 The Checkpoints are a band made up entirely of tumor immunologists. The harmonica player, James Allison, discovered CTLA4 and developed Ipilimumab, the first immune checkpoint blockade inhibitor. The lead singer, Rachel Humphrey, was responsible for the commercial development of Ipilimumab at Bristol Myers Squibb and now is the CMO of a biotech company. Tom Gaweski and Jon Timmerman, the two guitarists, are professors of oncology at the University of Chicago and UCLA respectively.  Patrick Hwu plays the keyboards and is the chief Melanoma oncologist at MD Anderson. The drummer, Dirk Spitzer, is a member of the Surgery department at Washington in St Louis. The horn section is made up of Jason Luke, another oncologist from the University of Chicago and Ferran Prat, who runs technology transfer office at MD Anderson. I had heard about the band in profiles of prominent tumor immunologist in the New York Times, but never imaged that I would have the opportunity to participate. 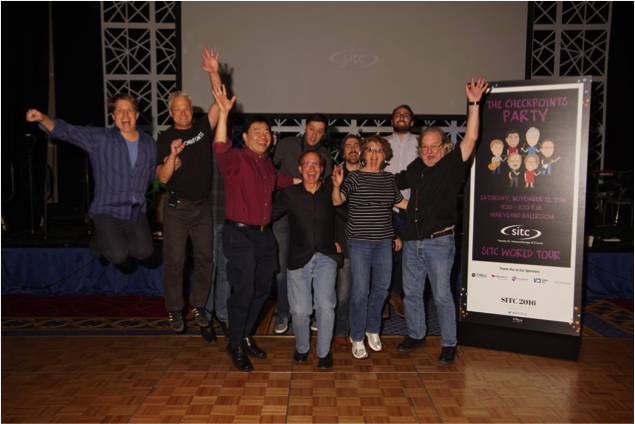 I followed the link in the aforementioned tweet, which took me to the job board on the Society of Immunotherapy for Cancer’s (SITC) website

I don’t know what defines a “fun personality”, but I thought I had a shot to be the bass player for the Checkpoints. Honestly, how many other people like to Slap da bass, Muddy Waters and the intricacies of PD-1 signaling. I took a realistic approach to this application process. Regardless of my talent, the narrow qualifications would result in a small applicant pool (in actuality: n=1) and hopefully my 10+ years of bass playing experience combined with my interest in tumor immunology would provide me with the opportunity to play with this group.

So I went ahead and emailed Dr. Thomas Gajewski, saying that I was interested in this position, and even shared my MD/PhD personal statement where I discussed the similarities between being a bass player and a physician scientist. Ultimately Tom responded that I sounded like a great fit for the band but before I could officially be a Checkpoint, we would need some sort of virtual audition. Fellow Vanderbilt MSTP student, Ben Fensterheim helped me record some tracks in his basement, which I emailed to Tom. A few weeks later, I was welcomed into the Checkpoints. 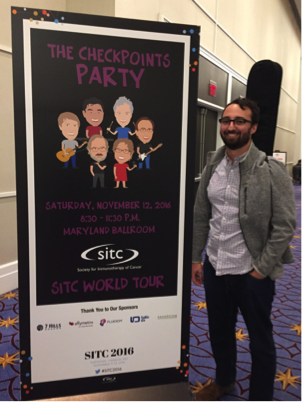 In the middle of Surgery clerkship (and the Cubs world Series run), I had my first rehearsal at Tom’s house on the Southside of Chicago. After finishing the Surgery clerkship exam the following Friday, I went to Houston to practice with more members of the band in a dusty warehouse on the outskirts of town. A few weeks later, I had the incredible opportunity to go the annual conference hosted by SITC in Washington DC. There, I learned about the new rare cell types now found to be important for durable response to PD1 therapies, the latest advances in adoptive T cell transfer, and the best combinations of chemotherapies and immunotherapies which ultimately resulted in resolution of patients’ malignancies. Just as important as soaking in all the science, I had the opportunity to play my first gig with the Checkpoints. 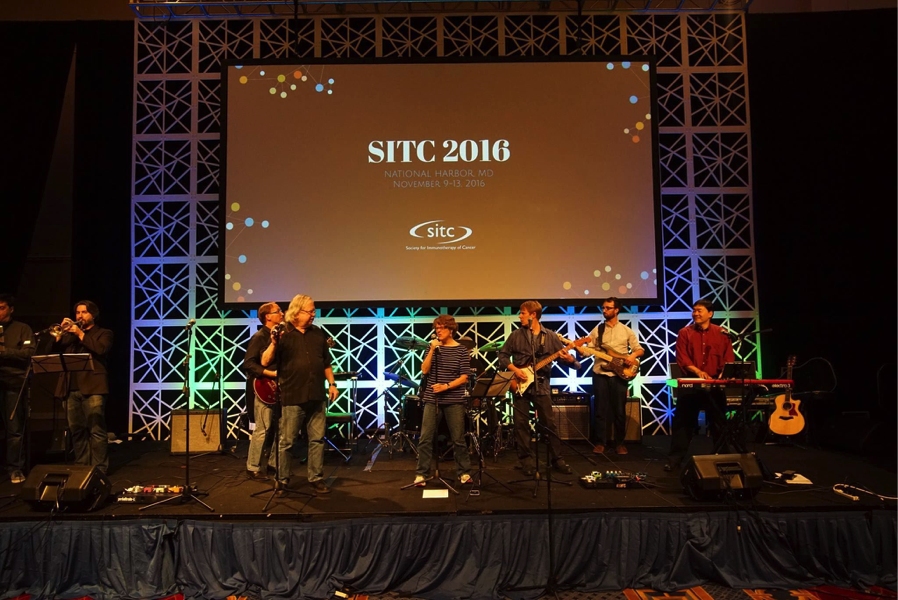 It would be reasonable to ask, what type of music does a band of cancer immunologists play? Well, we play mostly dad rock, with some modern hits thrown in to please all members of the crowd. The songs span from Adele to ZZ Top. The group’s theme song is Don’t Stop Believing. It functions as our referendum against all the naysayers of Cancer Immunotherapy, who today are pleasantly surprised by the clinical success of the immune checkpoint blockade.

Over this weekend, I was able to meet people from around the world who study oncolytic viruses, run innovative clinical trials , and create new technological platforms to better understand the subtleties of tumor-infiltrating lymphocytes. I am excited to continue to play with the Checkpoints, meet fellow scientist from around the globe and be exposed to this exciting field, which is changing the way we treat cancer patients. 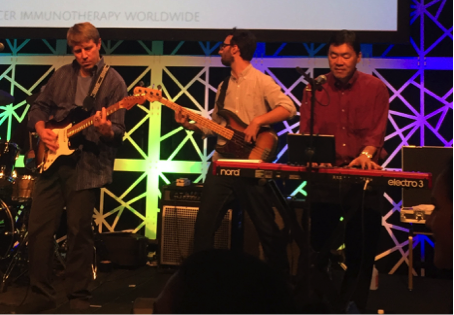 Last month as a part of the Physician-Scientist Speaker Series, Dr. Levi Garraway mentioned how he wished he took his hobbies as serious as he took his work life.  If that were true, he would be a better golfer and derive more enjoyment out of time out on the links. I have taken this advice to heart and now see my music outlet as a way to break from the emotional highs and lows of clinical medicine and also further my career development.

Read more about The CheckPoints here!