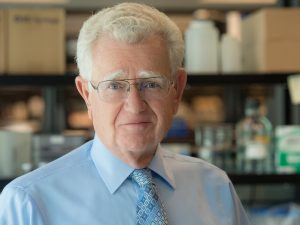 In 1964, the Vanderbilt University School of Medicine restructured its curriculum to encourage medical students to engage in rigorous biomedical research and to combine graduate school courses with medical school classes to obtain an M.D.-Ph.D. degree. That year, Robert (Bob) W. Mahley came to Vanderbilt and entered the combined program to become the first graduate of this formal program supported by the Vivian B. Allen Foundation for M.D-Ph.D. Scholars. Dr. Mahley worked in the laboratory of Dr. Virgil S. LeQuire, Professor of Anatomy and Pathology and founder of Vanderbilt’s combined degree program. “Without Dr. LeQuire’s guidance, encouragement, and financial support I could not have become a physician-scientist,” says Dr. Mahley.

Humble Beginnings in Rural Indiana, a Small College in East Tennessee, and Vanderbilt

Dr. Mahley grew up, in part, on a farm in Indiana. His life changed dramatically when his family moved to Florida, and his father died of a massive heart attack at the age of 37 years. Just 13 years of age at the time, Dr. Mahley was forced to go to work to help support the family. He had little interest in school until he was confronted by a high school teacher who exclaimed that he (Bob) was destined to be a ditch digger. Through the inspiration of his church and the men of the congregation, he decided to become a minister.

His life was further changed by his selection of a small college in east Tennessee, Maryville College, where he was inspired by a biology teacher to become a scientist. He was further inspired by a former Maryville College graduate, Dr. LeQuire, who hired Dr. Mahley to work in his lab at Vanderbilt after his third year in college. Dr. LeQuire’s lab was studying lipids. “This was way before we knew anything about plasma lipoproteins and how they were involved in heart disease,” says Dr. Mahley. He became totally engrossed in the topic, at least in part inspired by his father’s death from a heart attack. After he graduated from college, he returned to Vanderbilt to enter graduate and medical school to continue his work in Dr. LeQuire’s lab. In his thesis project, he showed that one of the major classes of plasma lipoproteins, called very low density lipoproteins (VLDLs), was synthesized in the liver. “Importantly, this work introduced me to a protein associated with this lipoprotein that didn’t have a name at the time and wasn’t characterized. A few years later, this protein got its name—apolipoprotein E (apoE)—and it became my life’s work to examine its role in lipid metabolism and more recently in Alzheimer’s disease,” according to Dr. Mahley. He obtained a Ph.D. in Anatomy and Pathology in 1968 and an M.D. in 1970.

The NIH, ApoE, and Heart Disease

After completing an internship in pathology at Vanderbilt, Dr. Mahley’s dream was to work in the heart institute at the NIH, which was the center of lipoprotein research in the 1960s and 1970s. At the NIH, his studies focused on the effects of dietary cholesterol on lipids and atherosclerosis. Again he encountered the unnamed, uncharacterized protein apoE. Cholesterol feeding caused this typically minor protein to become a major component of a class of plasma lipoproteins associated with accelerated atherosclerosis. This protein was clearly too important to ignore. He and his lab demonstrated that apoE was a critical ligand for the LDL receptor, the receptor that was at the time being explored by Drs. Joseph Goldstein and Michael Brown (close friends of Dr. Mahley and 1985 Nobel laureates). Through this interaction, apoE played a critical role in controlling cholesterol levels. Dr. Mahley remained at the NIH for eight years (1971–1979), starting as a staff scientist and ultimately becoming a section head in the National Heart, Lung, and Blood Institute.

He continued studying apoE. His group determined the structure of the protein and its gene, mapped the amino acid residues responsible for its interaction with the LDL receptor, defined the structure of the apoE isoforms (apoE2, apoE3, and apoE4), and established the link between apoE2, type III hyperlipoproteinemia, and premature heart disease. Dr. Mahley says, “The simple fact is that I have always just followed where the protein led.” After 30 years of leading the organization (1979–2010), he is now President Emeritus and continues his research as a senior investigator at the Gladstone Institutes.

By the mid-1980s, it was clear that, while apoE was important in heart disease, it was even more critical in neurological disease. One isoform of apoE, called apoE4, was shown to be the major genetic risk factor of Alzheimer’s disease (AD), and Dr. Mahley and his lab demonstrated that it is, in fact, a causative factor involved in several neurological disorders, including AD, traumatic brain injury, and possibly Parkinson’s disease. “I believe that apoE4 represents an important therapeutic target for AD and other disorders,” says Dr. Mahley. Carriers of the apoE4 allele have a 4–15-fold increased risk of developing AD. As Dr. Mahley and his associates have shown, when apoE4 is produced in neurons, it undergoes neuron-specific proteolysis to generate neurotoxic fragments that cause mitochondrial dysfunction and cytoskeletal alterations, leading to nerve cell death. Dr. Mahley’s lab showed that apoE4 has an abnormal structure. He and his associates have identified small-molecule ‘apoE4 structure correctors’ that convert apoE4 to the normal apoE3 structure and, in so doing, block the detrimental effects of apoE4 on nerve cells. These findings led Dr. Mahley to co-found a biotechnology company, called E-Scape Bio, Inc., which is developing apoE4 structure correctors as therapeutic agents.

Reflecting on your journey thus far as an M.D.-Ph.D., what has been the most impactful training experience in preparing you to establish your career?

There are several critical skills that must be developed to be successful as a scientist. Success depends on the excellence of your research, without doubt; however, in my opinion, fully 50% of your success also depends on your excellence in oral and written presentations. Focus as much attention and effort on developing your skills in lecturing and manuscript preparation as you do on your experiments. Developing these skills will pay high dividends.

What is your definition of leadership?

Leadership is not easy to define. In the book entitled Leadership Is an Art by Max DePree, he defines a leader as one “having the opportunity to make a meaningful difference in the lives” of those he/she leads. A leader, first and foremost, is a servant who liberates people to do what is required of them in an effective and humane way. Another definition of a leader that I like is that leaders are people who do the right things; managers are people who do things right.

Mentorship is a crucial component of both medical and scientific training. What advice would you give an MSTP trainee about selecting the best mentor?

Mentors have played a critical role in all stages of my career. Some mentors are for life; others are for specific periods for specific reasons. For example, scientific mentors are particularly critical early in your career. They help to guide your research. They don’t compete or conflict with your PI; they complement the strengths of your PI.

There are other types of mentors that provide valuable input into your career and life in other critical ways. Scientific-role-model mentors are people you watch—how they handle themselves and how they interact with others. You want to learn these skills from them. Life-role-model mentors may or may not be scientists. They are the ones that bring balance to you with respect to struggles with life issues. These are the mentors who bring perspectives from lives outside of science and medicine, and they are equally valuable.

I have always had two or three mentors at any particular time. Be bold and seek out mentors who are somewhat detached and can ‘hold up a mirror to you.’

What was one significant challenge you faced in your career?

The most significant challenge that I have faced in my career is one with which I still struggle. That is work-life balance. I am not proud to say this, but my work and research have almost always consumed me. I told my wife that I would have more time when I finished my thesis, when I got my lab going at the NIH, when I got the Gladstone set up, etc. There is always a new mountain to climb. I hope you are wise enough to figure this out!