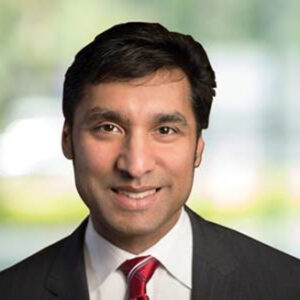 An Audience with Asit Parikh

Asit Parikh is an alumnus of the Vanderbilt MSTP who sits at the helm of MOMA therapeutics, serving as the President and CEO of the early-stage biotech company headquartered in Boston. Having traversed the traditional path of training through MSTP, residency, fellowship, and postdoctoral training, he embarked on the less traveled path in industry, successfully leading the clinical development of vedolizumab through Millennium and Takeda. He now maintains a limited clinical practice while serving as a biotech CEO, forging a career emblematic of the broad spectrum of roles pursued by physician scientists. As a proud alumnus of Vanderbilt, he recently joined as a School of Medicine Basic Sciences Board of Visitors member. I attended a recent seminar on campus he gave chronicling his non-traditional pathway and then caught up with him over Zoom where he sat in a conference room at his company’s headquarters. I was delighted to hear about his training experiences, transition to industry, his identity as a physician scientist, and his future goals – we dive into each one of these below.

Parikh grew up in the Midwest and had a long interest in science and medicine. His desire to combine these interests led him to join the Vanderbilt MSTP in 1993. Typical of many students, he had broad clinical interests upon joining, and thoroughly enjoyed his time in the lab. He completed a PhD with Fred Guengerich studying cytochrome P450 and developed a rigorous biochemistry foundation. With every intention of pursuing the traditional academic track, he moved to the University of Pennsylvania to complete residency in internal medicine, and then into a fellowship in gastroenterology at Massachusetts General Hospital, and a postdoctoral fellowship at MIT.

Reflecting on his early training, I asked Parikh what advice he would have of how to acquire the non-traditional skills that would lend to success in a position such as his current one. Thinking back, he had no desire to have pursued things differently. The classic physician scientist training provides incredible skills that are conducive to a wide variety of applications. Throughout the process though, one can aspire to be more perceptive of all the individual components that constitute the healthcare ecosystem, and how these converge to impact patient care. It’s important to be aware of how things get moved forward and how to drive an idea, whether in academic medicine, private practice, or business. The various stages of training provide many opportunities to observe these elements if one is perceptive and intentional.

His largest piece of advice was to think very deeply about respective contributions between research and clinical practice, and how to effectively balance these complementary but distinct entities based on one’s goals. In his own words, he wanted to be and needed to be a researcher. This encouraged him to aspire to an 80/20 split while retaining a symbiotic clinical focus. In his mind, the variety of routes research could take created a welcome diversity in the day – this was true in his academic research, and even more so in his research and responsibilities in pharma and biotech. As always, the adage ‘know thy self’ can help identify the drivers that provide the greatest personal fulfillment and is imminently helpful in discerning a career path.

As Parikh continued through the pipeline, he enjoyed his training but encountered some of the traditional difficulties that lead to attrition. During a recent seminar to the Basic Sciences, he encouraged students to diversify their research interests between a PhD thesis and postdoctoral fellowship, but not to chance fields so dramatically as to lose an anchor. During his time in the Jacks lab at MIT, he pursued several ambitious projects in oncology which was far outside the scope of his thesis work. The gap created a difficulty when the hard-earned skills of the PhD weren’t immediately helpful for his postdoctoral projects. While he enjoyed his clinical and research time throughout this period, he found himself stretched thin during his research as he pursued a broad variety of projects. Consequently, it was an uphill battle to fight to stay in the academic pipeline.

Parikh admits that his main shortcoming during this time originated from the breadth of his interests. Although his clinical time was dictated by classical expectations, essentially to show up at a certain time and deliver the best possible clinical care, research time was significantly less defined. Reflecting now, he encourages students to think about and recognize the well-defined and less well-defined projects as one moves towards an increasing degree of independence. One must be ready to chart a course to a final destination, and again, personal preferences may lead one to view uncertainty as stressful, gratifying, or both. Going one step further, he noted that it is important to consider the ultimate goal of training. During the long and arduous process of physician scientist training, it can become easy to slip into the notion that the next stage is the ultimate goal. Instead, one must be intentional about focusing on the kind of role and career these years are building towards, and what the ideal role might look like. As someone now in a role requiring evaluation of a variety of individuals, spanning clinical care, academia, and venture capital, he is often drawn to these core characteristics of long-term thinking and defined priorities.

Having decided on a pathway outside of academia, Parikh continued to work in the lab while patiently awaiting his next opportunity. Serendipity struck, and he found himself in a clinical development role for Millennium Pharmaceuticals. Founded in 1993, the company was among a suite of successful biotech companies at the time focused on integrating genetics and molecular biology towards drug discovery. In his most overarching role, he championed the clinical development of vedolizumab, an antibody that targets a gut integrin with applications in Crohn’s and Ulcerative Colitis. When he joined the company, enthusiasm for this approach was low. A related class of molecules from another company had shown initial clinical promise in IBD, but off-target effects through lack of specificity for gut integrins had precipitated fatal neurological events that dampened regulatory support for this class of drugs. The critical development with vedolizumab was selectivity for the gut integrins while avoiding the CNS effects observed in the predecessor molecules from less selective targeting. While they could show the increased selectivity relatively easily at the bench, proving selectivity and efficacy in humans represented a much more demanding task. Parikh and his colleagues performed a tour de force of clinical pharmacology, adopting several distinct and elegant scientific methods over many years to show the absence of the rare off-target neurotoxicity while consistently observing a clinical benefit in the primary indication.

To further complicate matters, Millennium was acquired by Takeda Pharmaceuticals in 2008. During this time, Parikh had to advocate for the vedolizumab program, as strategic positioning in therapeutic areas coupled with poor regulatory enthusiasm at the time didn’t immediately endear Takeda to continue the support of the program. Nevertheless, he was able to persevere through this work, and combined scientific and clinical acumen to see the drug through successful phase III studies. Reflecting now, he is incredibly satisfied to know that hundreds of thousands of patients have benefited from this medication, representing a significant impact on patient care through his work. Importantly, his approximately fifteen-year period at Millennium and then Takeda exposed him to many levels of management and an incredible diversity of processes and research that enable such foundational drug discovery. By the time of his transition out of Takeda, he had served in roles spanning a remarkable breadth from pre-IND to approved drug studies.

While satisfied with his role at Takeda, Parikh found himself thinking about what might be next. Like many others, the COVID-19 pandemic provided him with an opportunity to reflect on priorities and future directions. He felt that the structure he had helped put in place at Takeda was prepared for many more future successes, and he found himself wanting to contribute somewhere in a more meaningful way. Earlier this year, he was brought on to head the biotech company MOMA Therapeutics as President and CEO, a company focusing on targeting an ubiquitous class of molecules in molecular machines. During the past decade we have witnessed an explosion of innovative biotech companies. When asked why specifically to join MOMA, he provided reasons reflecting his continued scientific curiosity and clarity of goals. In line with his scientific background, he thought of molecular machines as a great target class of proteins that was historically difficult to drug but not impossible. Recent advances in many disciplines of science have begun to render this class hard but tractable, a combination he sees as perfect for an early-stage company. Additionally, he found himself amazed by his colleagues and the scientific founders, which is especially important when effective teamwork is so critical to achieving success in this risky industry.

Adapting to the new role has been challenging but rewarding. He has long enjoyed being outside of his comfort zone as a mechanism of personal growth. He states that working in the life sciences provides an incredible set of circumstances with the ability to always be learning. Ideally, one is never forced to be doing the same thing repeatedly. In contrast to his broad roles at Takeda, he has had to pivot to focus more intently on early discovery. The return of daily talks with basic scientists has been incredibly fulfilling, especially as programs continue to gain traction and the company continues to grow. He is eager to continue to expand MOMA as a company and eventually bring treatments to the clinic much in the same way that he did at Takeda. Most importantly, he sees this as an opportunity with a sufficiently long time horizon to show resilience and unwavering purpose. Through it all, he has maintained a clinical practice in GI as an attending at a small community hospital. Serving as an attending for weeklong stretches keeps him grounded in the clinical applications of his science and a constant refresher on the impact of such work.

When asked about how he considers his identity, he demurs a dichotomy between a physician scientist and a businessman. Instead, he sees his role at MOMA integrally supported by his clinical and research training as a physician scientist while employing a blend of different skills acquired through experiences in management. He encourages students and trainees not to think of such transitions as switches. To succeed in these types of leadership roles, one requires an extremely deep appreciation of the way basic and clinical research operate, which can only be achieved by building new skills and accumulating interests. He is additionally excited for his role coming back to Vanderbilt as a member of the School of Medicine Basic Sciences Board of Visitors. In this role he hopes to achieve a synergy with the strong basic science being conducted at Vanderbilt and his insights and experiences in the biotech ecosystem at MOMA. He sees it both as a way to give back to the university that supported him and to provide an additional frame of reference for scientific thinking. He is especially optimistic for the vision that Chancellor Diermeier has for the future of the Basic Sciences within the University and for the continued success of the Vanderbilt MSTP.