Field of His Dreams: Derek Riffert returns to VUSM 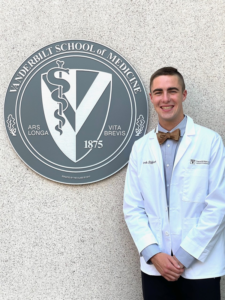 M1 Derek Riffert shares a first name with his hero, Derek Jeter. As a kid in West Lafayette, Indiana, he watched the five-time World Series champion lead the New York Yankees to win after win. He observed the leadership No. 2 brought to the clubhouse game after game. And he wanted to be a leader like Jeter.

Though he won’t start at shortstop for the Yankees, Riffert hopes to one day be the captain of his own operating room, working with a team to save lives. He can picture it now: dressed in navy and white pinstripe scrubs, he walks into the room of a young patient. A little boy sits in the bed, his parents standing anxiously by for a consult ahead of surgery. He bends down to chat with his pediatric patient.

“I knew in high school that I really liked biology already,” he said. “Through high school, I thought doctors were pretty cool – I knew it was a prestigious profession. And as I grew, my motives changed. I began to realize what doctors actually do in taking care of other people. As I entered freshman year of college, I saw how I could cement that empathy for others and incorporate my love for science with caring for people.”

With a passion for people and possible diagnoses, Riffert went to Indiana University, the rival school of his hometown Purdue Boilermakers (his father’s alma mater). While he studied biology, he realized he needed research experience or an internship to achieve his goal of entering medical school. He submitted application after application until he received a letter from Vanderbilt University.

Venturing to Nashville in the summer of 2019, Riffert studied protein trafficking in a set of rare genetic disorders called Hermansky Pudlack Syndrome as part of the Undergraduate Clinical Research Internship Program (UCRIP). College students enrolled in a four-year degree program come to Vanderbilt each summer to participate in research and clinical patient care at Vanderbilt University Medical Center (VUMC).

As he made rounds with VUMC physicians and medical students from Vanderbilt University School of Medicine (VUSM), the MD students readily offered advice and perspectives.

“We would round weekly in the hospital with an internal medicine team, and there were always students involved on those teams who were doing their acting internships,” he said. “They were super welcoming and wanted to teach us stuff. I immediately felt very welcomed here. Everyone seemed to care what I was learning and what I was getting out of the program even though I felt very young and like I didn’t know anything.

“It’s so friendly and welcoming here. It can be high pressure, but with them, you don’t really feel it.”

Working with students and VUSM faculty gave Riffert a sense of appreciation for the community fostered within the school. Each Friday, participating students gathered for lunch with program director and VUSM Associate Dean for Diversity Affairs Kimberly Vinson. She also hosted the students at her house where they met her family and bonded over dinner.

That sense of community and extracurriculars called Riffert back to Nashville.

“It was my first time not living in Indiana for an extended amount of time when I first came here, so I was a little nervous,” he remembered. “I had a random roommate in a dorm on campus, but really quickly, my program bonded, and we were able to find things to do outside of Broadway. I really started to explore the city and find the nice restaurants. I just fell in love with the city altogether. I loved how much there was to do not only in the city but also within 30 minutes of the city, too.”

Now, living in the Hillsboro Village area of Nashville, he continues to frequent local restaurants and connect with his fellow medical students outside of class. He even meets regularly with a group to play casual ultimate frisbee at Centennial Park.

And while he continues to have fun finding the best skyline views of the Music City, he also remains focused on schoolwork to help him reach his goal of being the team captain of his own OR – and of owning those pinstripe scrubs.

“I feel like it’d be so cool to have some Yankees pinstripe scrubs,” he said, laughing. “Get custom scrubs for everyone else that works with me in the OR. Get numbers on the back – whatever number you want. It is such a team effort, after all.”

Though a common phrase says, “It takes a whole village to raise our children,” Riffert might say it takes a Hillsboro Village to raise a surgeon. And he can’t wait for his turn at bat.