Vanderbilt Takes on Capitol Hill: A Look Inside Science Policy for Students and Fellows

This article was originally published in Results & Discussion, Issue 9, Spring 2019.

The BRET Office of Career Development and the Graduate School took to the road in October 2018 to further their combined mission of empowering and preparing Ph.D. and postdoctoral trainees for careers within the biomedical sciences. The trip, hosted by the Vanderbilt University and Vanderbilt University Medical Center Offices of Federal Relations, took 20 Vanderbilt graduate students and postdoctoral fellows to Washington D.C., where they were given the opportunity to explore how policy and science influence one another. The two-day seminar provided insight into how policies are designed and promoted. Furthermore, participants had the opportunity to advance their future careers via networking events.

“I didn’t really know what science policy entailed,” said fifth-year graduate student Meagan Postema. “This trip helped clarify what a science policy career would look like. It also gave me connections and ideas for what steps I should take post-graduation if I want to continue to pursue a career in policy.” 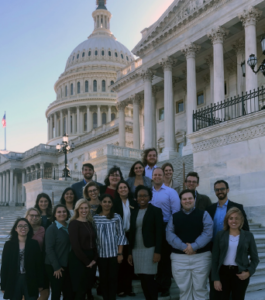 The trip began with a panel discussion from a variety of speakers, including Tobin Smith, Vice President for Policy at the Association of American Universities, who outlined key points in the history of science policy in the U.S., such as how the NSF and NIH came to their current form. He also spoke about the difference between science for policy (science that informs policy decisions) as opposed to policy for science (policy that affects how science is done). After lunch, we engaged in a lively conversation with VU alumnus Sam Feist, CNN Senior Vice President and Washington Bureau Chief. Topics included in our meeting ranged from Election Night coverage at CNN to the accuracy of scientific discovery coverage by news networks.

After a quick walk to the Capitol, the group filed into a Senate committee room to learn first-hand about careers on Capitol Hill. We heard from panelists, including several Vanderbilt alumni, who worked in the legislative offices of various senators and congresspeople. This session was particularly interesting as we got an opportunity to understand how science is communicated to members of Congress by their legislative team and how this communication can influence policy decisions. The first day ended with a networking reception attended by 19 Vanderbilt alumni who now work in a variety of science policy roles. Many of the attendees found the reception both helpful and fun, as it allowed us to connect on a personal level with individuals in a wide range of policy-related jobs, get a sense of their day-to-day life, and see how their career paths developed after graduate school.

The second day kicked off with a budget appropriations case study that allowed participants to experience first-hand how the federal budget for science is determined as they simulated the negotiation and debate that happens within the budget appropriation committees. The day continued with a panel on science and technology policy fellowships, which many trainee participants said they found very helpful as they think about moving forward in their careers. The trip ended in an exercise in advocacy, in which small groups came together to brainstorm ways to convey the importance of basic science funding to the public.

This workshop provided an excellent opportunity for our group to learn exactly what science policy entails. Everyone returned to Vanderbilt having learned a great deal about who influences policy, how science can help, and why we, as scientists, should be involved in science policy advocacy on both a state and federal level. We found that scientists work at all levels of government, from congressional offices to agencies such as the U.S. Geological Survey or the Environmental Protection Agency, where they perform a variety of roles. For those interested in careers involving policy, we learned about fellowships offered through AAAS and many professional organizations, such as the American Astronomical Society or the American Chemical Society. As we reflected on this trip, we found that this experience gave each of us valuable new knowledge, connections in a new arena, and furthered our interest in the world of science policy.