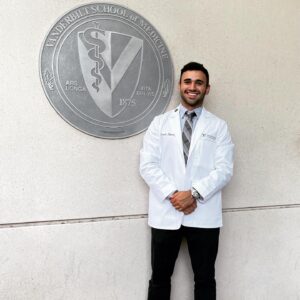 Sitting at Barcelona Wine Bar and Restaurant in the Edgehill Village neighborhood, M1 Amad Amedy feels an evening breeze filtrate through the open-air patio. As he peruses the tapas listings, the humid air density and smell of café con leche engage his memory, transporting him from Nashville to Spain.

Funny how the mind works.

As a Fulbright Scholar, Amedy studied neuropsychiatric disorders including schizophrenia in Barcelona, Spain. His medical studies continued as a scientific breakthrough, one with malintent, began to affect patients across the globe: COVID-19. On March 11, 2020, a barrage of text messages from friends in the United States alerted him to then President Donald Trump’s ban on travelers from the European Union. Four days later, Spain issued a state of emergency.

Amedy found himself in a “state of disarray.”

The vibrant city dimmed and closed, and he became a man without a country. But he’d been that before, the moment he took his first breath.

“I was born on the way to America,” he said. “I was born in Guam at a refugee camp.”

Amedy’s mother gave birth to him as she, his father, and family fled genocide in Kurdistan. With only the bags they could carry, his family found their way to Fargo, North Dakota, before settling in the nation’s largest Kurdish community in Nashville with a population of around 20,000 people. 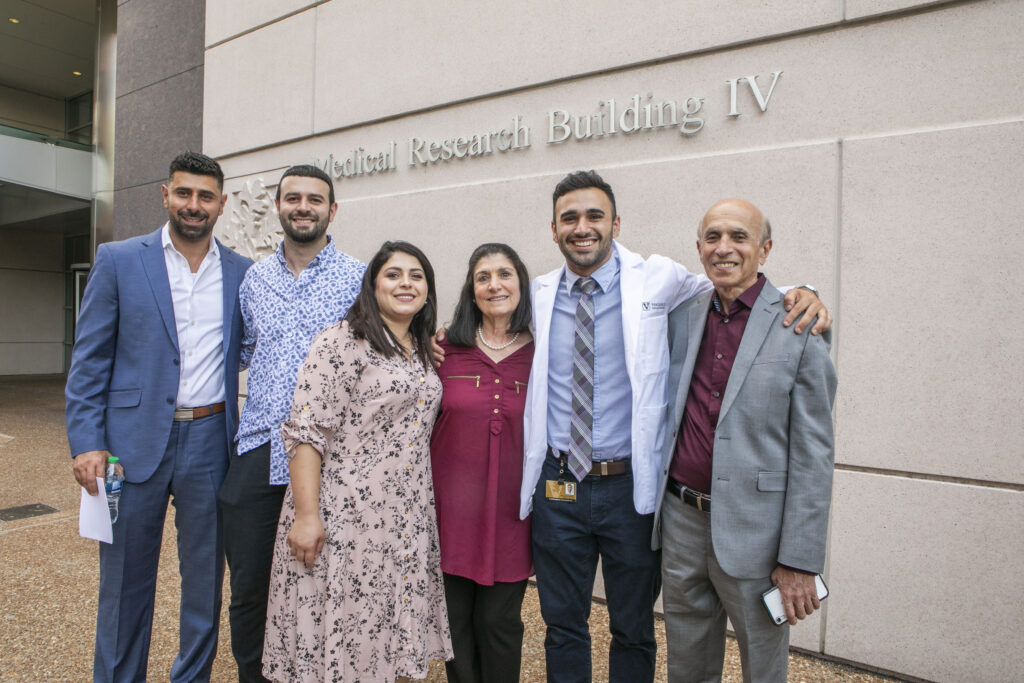 Little Kurdistan in South Nashville rose in 1976 as families fled the oppressive regime of Iraqi leader Saddam Hussein. When Saddam launched genocidal attacks on the Kurds in the early 1990s, thousands of refugees fled. Many like the Amedys found their way to Nashville where the area has grown with markets, restaurants, shops, and the Salahadeen Center, the first Kurdish mosque in North America.

“My dad was a renowned architect in Kurdistan,” Amedy said. “He realized that tensions were getting bad, so our family quickly packed all that we could carry and fled to the mountains. Thanks to American help, we were rescued, and I subsequently became a natural born U.S. citizen. They shipped us to North Dakota. My family shortly realized it was too cold…People from the hottest region on Earth, and you put them in North Dakota? So, we drove down South to Nashville, where we’ve stayed for the last 20 years.”

Amedy, in a bind in yet another country, thought about how his situation compared to that of his parents who had to travel to a new country with little to no grasp of the English language.

“It was right before 9/11, and my parents didn’t speak any English,” he said. “My dad couldn’t find a job. All the qualifications he had to be an architect just out the window. It didn’t matter here. They took courses that didn’t really turn into anything, and ultimately, my dad had to settle for a job for which he was overqualified.”

Then, another stroke of misfortune for the family. After 9/11, the elder Amedy’s employer hastily fired him without much explanation. Backed into a corner, his father decided to go back to the Middle East, where he served as a translator in the U.S. Army.

“So ironic,” Amad said. “He fled the Middle East just to end up there.”

Luckily, while his dad served overseas, the rest of Amedy’s family found a close and supportive community in Nashville.

“My neighbors would watch after my siblings and me while my mom worked. All the kids in the neighborhood were so close because of it,” he said. “Everyone was a family.”

As a kid playing soccer in the street, his neighbor, Miss Mary, watched from the window to make sure he stayed safe while his parents worked. Driving past the revelers, Trevecca Nazarene men’s soccer coach Matt Smith noticed the boys whose families could not afford to pay for league soccer participation. Smith had joined Ultimate Goal Ministries, an outreach group focused on ministering to and training refugee and international youth athletes, in 2000.

Pulling up in a van to pick up several refugee children probably seemed suspicious to the outside world, but Amedy said that Smith’s altruism became a saving grace for those whose families survived paycheck to paycheck.

“This guy dedicated a lot of his own time to create a team for us. His organization funded the team, paid for all of us, and he would literally go out of the way to drive us to and from every soccer practice and game,” Amedy said. “He wouldn’t ask for a penny…He would sometimes take us to his own house and have a barbecue and talk about like what it means to be a good person, good teammate…It was great to have that…He’s a really good coach. We went from the lowest league to like state tournament for Division I soccer.”

Now the first Kurdish student to enter Vanderbilt University School of Medicine (VUSM), Amedy credits his community with helping him accomplish each goal, in soccer or in life. As a first-generation student, he had not considered college, much less graduate school, as an option. Stretching pizzas at his brother’s pizzeria, he balanced school, soccer practice, and work to make ends meet with little thought about the future.

His guidance counselor at Overton High School pushed him to apply to top universities and liberal arts institutions across the country, leading him to Wesleyan University where he majored in Neuroscience & Behavior and biology.

“I’m a first-gen kid. I’d never toured a college before. Like, what do I know about college?” he said. “So, I applied to liberal arts schools, and it worked out for the better. I got in, I got a full ride, and my life changed from there. Never stretched another pizza again.”

From pizza to PIs

During his undergraduate years, he found an opportunity to return to Nashville through Vanderbilt’s Summer Science Academy and Undergraduate Clinical Research Internship Program. He connected with Dr. Sohee Park in Psychological Sciences. His work with social-cognitive therapies aimed at remedying cognitive deficits in schizophrenia as a student researcher prompted a love for neuroscience.

“It was a domino effect. I was really lucky that everything in my life worked out the way it did because I really rose through the cracks. I did research, and my research led me to the UCRIP program, and the UCRIP program was great because it led me to fall more in love with medicine. During the UCRIP program, I said I wanted to do research abroad. My advisor said, ‘There’s only one way you can do that and that’s through a Fulbright grant.’ I asked, ‘How do I do that?’ and she said, ‘Well, actually, I have a connection in Spain if you want.’”

Amedy reached out to the lab in Spain where researchers felt he would be a perfect fit on their team for a similar project. With little knowledge of Spanish but plenty of interest in neuropsychiatric disorders, he earned his Fulbright grant. From working closing shifts from a small pizza shop in Nashville, Amedy suddenly found himself frequenting the cafes that lined the streets of Cataluña. Having never traveled outside of the U.S., Amedy quickly connected with researchers and friends from all over the world, traveling to 17 countries in doing so.

Able to return to the U.S. in March 2020, Amedy then went to Boston where he worked in a dermatology office. There, he continued a mission of care that he brought back to Nashville.

Returning care to the community

Having been on the receiving end of community support, Amedy wants to care for the community that has always supported him. Though he remains open to exploring different specialties, he feels he must serve VUSM and Nashville in whatever capacity possible. And as the first Kurdish student, he feels a responsibility and purpose to his studies here.

“I feel like it would be lost on me if I didn’t do everything I could to make sure other kids have that opportunity,” he said. “I want more Kurdish students to come to Vandy if they can. We need more Kurdish doctors. There are like no Kurdish doctors that I know of practicing here. And there’s like 20,000 of us here.”

As a volunteer with the Kurdish American Medical Association, he organizes public health communications for the Kurdish community. During the COVID-19, he and other professionals created translated infographics about COVID spread to educate the underserved population. Hosting town halls, he answers questions about the delta variant and makes pandemic jargon digestible for participants on Facebook Live.

Community remains at the heart of his desire to study medicine and encourage fellow practitioners to provide culturally competent healthcare. Amedy fittingly serves as the community outreach coordinator for Shade Tree Clinic, a free student-run clinic system for the uninsured, underinsured, and/or housing insecure population in Nashville. The clinic’s patient panel hovers around 50% non-English speaking.

Beyond current opportunities, Amedy hopes to form an initiative through which medical students and physicians at Vanderbilt University partner with underserved high school students to expose them to the medical field.

“Anything I can do to be the person I needed growing up,” he said. “I want to say, ‘Look at me now. I’m a medical student from a background like you.’ We could present cases and show them what being a medical student or doctor is like. Maybe connect them with summer programs. I think it would be really cool to show them that potential.”

A potential Amedy said he’s glad VUSM recognized in him.

“It really is a huge honor.”

As dinner rush calms at Nashville’s Barcelona, Amedy watches people come and go – his community members in the city where he feels honored to say he belongs.