When Lt. Col. Will Hansen officially retired from the U.S. Army on Sept. 1, 2019, he stashed his uniform in the closet not knowing light outside would ever reach its stitching for a military reason again. Five days later, he pivoted to a new career as an administrative assistant for Medical Student Affairs at Vanderbilt University School of Medicine (VUSM).

A student walked in.

“Dean Fleming, you have a soldier out here waiting,” he said.

Though this slip of the tongue seemed like an easy mistake after a 24-year military career, the designation of “soldier” remains an accurate way to describe some VUSM students – brethren in the fraternal sense to people like Hansen and Dean Amy Fleming, who served in the Air Force.

The Armed Forces Health Professions Scholarship Program (HPSP) covers civilian medical school tuition, pays for monthly living and fees, and provides a stipend for medical students who commit to service upon graduation. The United States Army, Navy, and Air Force offer opportunities for two to four years at an accredited medical school or college. Scholars must enlist, attend officer training, and serve as a medical officer in the affiliated branch.

Assuming his new role, Hansen felt a sense of purpose in aiding the growth of future medical practitioners and leaders, those who serve on the frontlines of health crises and dedicate their lives to service of their fellow human beings. His administrative duties took a special and literal turn, however, when two HPSP students approached him to administer their Officer Oath of Office immediately following the 2021 White Coat ceremony.

“It pulls on your heartstrings,” Hansen said. “The military was such a big part of my life that I had seemingly comfortably put it to bed…It had served its purpose and would go quietly into the night. For them to ask, it just made me feel warm. It made me feel useful, and I took this job because it has a larger mission just like the military did.

“That I get to vicariously travel through their process of becoming a doctor is phenomenal.”

First-year medical students (M1s) Sean Luong and Natalie Jones took their oaths for the United States Navy on July 23. Hansen, as a retired officer, remains one of the only individuals on campus aside from ROTC personnel and Maj. Gen. Gene LeBoeuf (an engineering professor) eligible to administer the oath. Full officers may administer the oath throughout their careers and in retirement.

Hansen pulled his uniform out of the closet, hoping it still fit. A little loose, a ballooning sense of pride filled the gaps beneath the threads. He would once again act in service, this time for two officers-to-be as they pledged not only to support and defend the Constitution of the United States but to provide medical care for those who take the same oath.

“This was another facet that I hadn’t even thought existed,” he said. “Just to put the uniform on again for a legit reason brought back some good memories.”

Often, HPSP students come from military families in which a relative might administer the oath. Many take their oaths at their local recruiting stations before ever coming to campus. But Luong and Jones made their commitments in front of their classmates, new instructors, and families – a moment Hansen hopes they will remember for the rest of their careers.

From SpaceX to VUSM 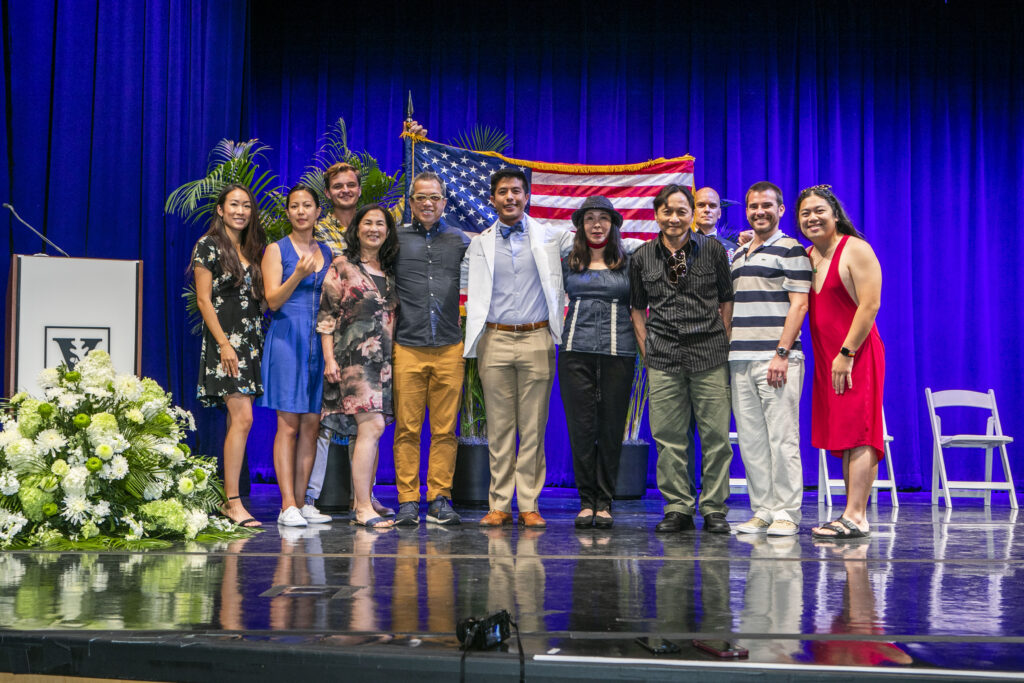 For Sean Luong, the military has always been a dream. In the first grade, while his classmates drew photos of doctors and lawyers as aspirational career figures, he drew a soldier. However, as a first-generation American, the goal clashed with his family’s idea of a future.

“My dad’s family fled the Vietnam War,” he said. “Amongst that generation, the stereotype is that they want their children to be lawyers, doctors, or engineers, 1) because it’s safe and 2) because you establish yourself in society…They want their next generation to be set and safe. Obviously, the military was low on the list. Of course, that’s not always true. That’s a stereotype. But it was true for my family.”

Without an example to follow for how to pick a university or major, Luong found himself somewhat aimless at the University of California San Diego where he earned bachelor’s and master’s degrees in structural engineering. He eventually found meaningful outlets in volunteer opportunities like Reality Changers, a nonprofit where mentors help at-risk and underprivileged youth in the City Heights area of San Diego.

Even during a five-year career at SpaceX, Luong gravitated to service. While working with children through Operation Progress, a nonprofit started by Los Angeles Police Department officers, he found purpose in protecting vulnerable populations. He even became an LAPD reserve police officer and volunteered to be stationed in South LA.

“I recognized [social issues] have a lot of different facets,” Luong said. “…I wanted to see how else I could get involved in that neighborhood, in that community, working with disadvantaged populations in a different way…I really enjoyed that experience working as a first responder. You never know what’s going to happen. You really have to rely on those around you, and that creates a really strong sense of camaraderie.”

As he responded to calls, Luong realized his passion remained firmly people-focused. With mindful compassion, he left SpaceX and its technology to enter the medical field through pre-med studies at Scripps College.

“People aren’t machines. They’re not problems to be solved. I like that having emotional skills and compassion are just as important as scientific knowledge in being a good caregiver,” he said. “Not just trying to solve somebody’s medical problems, but also being an educator, or guide, or whatever that individual you are caring for needs – to be that person for them. I’ve always been most fulfilled in these types of roles.”

His role as a guide came full circle when he applied to medical school at the same time as one of his former student mentees from San Diego, now a medical student in the Charles R. Drew/UCLA Medical Education Program. And, finally, he returned to his first-grade dream of joining the military – a choice, he said, that remains underscored solely by a desire to serve.

“It hasn’t quite sunk in yet, I think,” he said. “I recognize how much of a commitment it is. It took me a long time and a lot of reflection to get to the point where I decided to pull the trigger and start the application process. I think I frontloaded all of that reflection about what this means, so taking the oath did not make me feel any different because I already committed to this path the day I began applying for the scholarship.”

Vanderbilt School of Medicine currently enrolls 12 active HPSP students in addition to two Bass Military Scholars, veterans who share military experience in five degree programs on campus. VUSM also has students who participate in the Veterans Affairs Veteran Readiness and Employment Program and Medical Student Stipend Program, which offers a stipend in exchange for service as a Reserve officer after residency.

No two paths look the same. 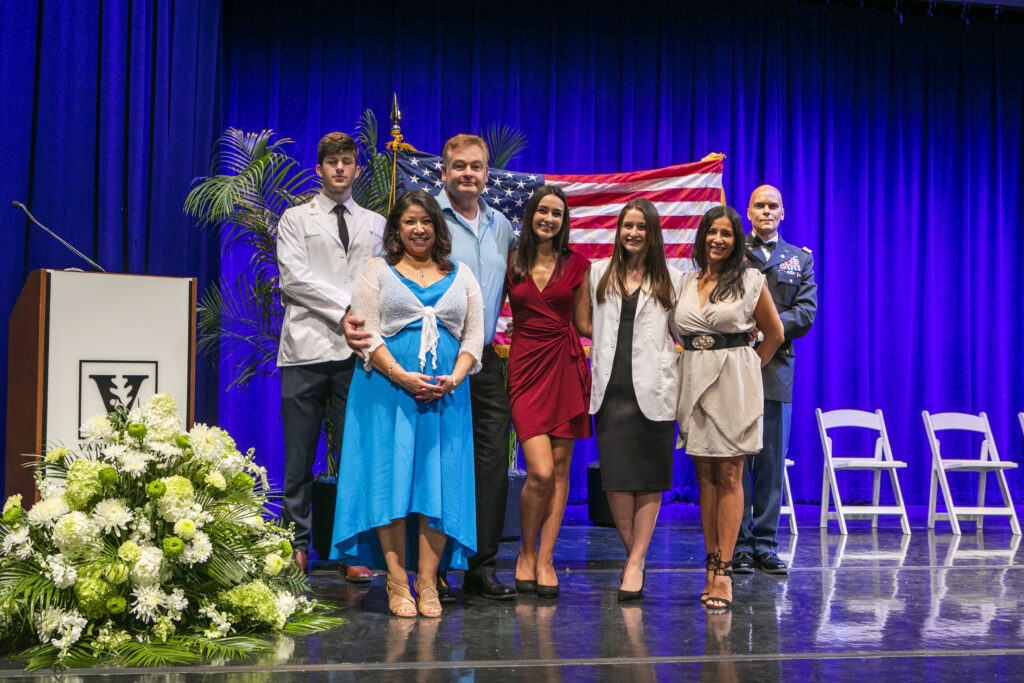 When Natalie Jones studied at Virginia Tech, several of her friends joined the Corps of Cadets, a division of the student body that receives a military and leadership education experience. Cadets may choose to pursue commissions in the Army, Navy, Marine Corps, or Air Force. Though she did not join the cadets, Jones understood the meaning of “corps.”

Translated from French, corps means body. And whether she’s working with physical bodies in anatomy dissection labs or alongside a body of new peers in the Armed Forces, Jones takes her commitment to the corps to the core.

“Obviously the scholarship benefits are great, but I didn’t do it for that reason. That shouldn’t be the deciding factor,” she said. “This was something I felt like I was able to fully choose. It was really my decision.”

Like Luong, Jones knew her career path from a young age. Her mother scribbled her childhood quotes on scraps of paper. The words on crumpled scraps from age three until now: “I want to be a doctor.”

As she embarked on her pre-med career and researched potential programs, HPSP continued to appear. Having no background in the military aside from extended relatives in the Army, she turned to friends in the Corps of Cadets for advice and perspectives. Ultimately, she made the decision to serve based on her own desire to see the world and help those in need.

“The Navy has such a large air force, and they have all of the ships available, and dive medicine, and different forces that can go out to do special missions,” she said. “They have Mercy Ships that go around the world doing international aid and just so many unique opportunities…It just called to me.”

Jones, who holds bachelor’s and master’s degrees in neuroscience, slipped her white coat over her shoulders for the first time, realizing her dreams would soon be reality. Then, with emotions already running high, she remembered she would also be a naval officer with endless possibilities to help communities across the globe.

“[Taking my oath] was a surreal moment. There’s no going back from that,” Jones recalled. “It was this confirmation that this was where my life is going and that this is the direction I’m now moving in. Even though I’d made the decision in my head before, it did feel like a deciding point, like a turning point of what’s to come.”
Making her commitment in front of classmates and with a classmate established a foundation for community that Jones said will continue throughout her career. She remains hopeful for the support she will find both at Vanderbilt and in the Navy, working alongside people willing and excited to help her journey.

Will Hansen feels the same.

“It’s like a proud dad, is how I feel,” Hansen said. “You only get enlisted once in the service…I’ll do my best to continue to support them and hopefully stay connected with them so I can listen proudly as they go through their careers and find all the open doors that I found.”