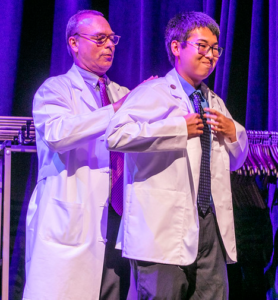 In Murfreesboro, Tennessee, a Jack Russell terrier named Sadie scampers and plays in the mild plateau breeze. Leaves crunch under her feet as she anxiously paws at the ground, waiting on her human to come. He knows how to best care for her, but he also currently studies how to care for humans, too. She’s content to wait with his parents while he’s growing as a future physician at Vanderbilt University School of Medicine (though she wishes she were there chasing squirrels).

M1 James Yang always knew he wanted to stay close to family and Nashville hot chicken. Both provided comfort growing up, and he knew he would need to rely on them as he applied himself to the rigors of biochemistry and education studies. Besides, he needed help taking care of Sadie.

Vanderbilt University provided the programs and proximity he desired. Opening the acceptance email, he sighed with relief, knowing he would be among some of the top students and researchers in the country practically in his own backyard.

“Vanderbilt is incredible. Professors have come up with groundbreaking global work just a few doors down from classrooms where I studied,” Yang said. “Vanderbilt is great at everything. Mentoring is amazing, the student body is amazing. Vanderbilt was my first choice for undergrad, so I’m really happy that I got in.”

As he walked around campus, he recognized scholars sitting on benches or eating in Rand Student Center. He passed by Robert Campany, an internationally-recognized leading scholar in Chinese religious history, as he grabbed lunch among bustling undergraduates. Venturing toward the eastern part of campus, he spotted Peabody faculty instrumental in the development of education intervention programs now common in schools across the country.

He watched these individuals, prominent in their fields, mundanely grabbing a cookie or trying to avoid students racing down the sidewalks on bicycles. Yang realized his professors were ordinary people with lives like his, making them approachable. As he chatted with them, he gained exposure to new ideas out-of-the ordinary.

“They’re ordinary people who eat in the undergraduate cafeteria, but they have these incredible experiences they’re willing to share,” he said. “It’s been really helpful for my development.”

When he first arrived at Vanderbilt, he seriously considered a career in teaching. His teachers growing up inspired him with their abilities to connect and interact with students in formative ways. Yet, he retained an affinity for science that he just couldn’t shake. He said he has always been interested in disease and helping others, and he realized during volunteer experiences at the hospital how doctors may act as teachers, explaining cases to both medical teams and to patients.

“I was interested in a teaching career, which I think medicine also allows you to do as you teach students in a medical school, or teach residents, or have students work in a lab at various stages,” he said. “I think as a physician, I could combine all my passions of science, teaching, and helping others. I’ve seen how much doctors matter in a patient’s life. I think that’s what drove me to put together an application, apply to medical school, and matriculate here.”

Before he arrived as a student at Vanderbilt University School of Medicine (VUSM), Yang had already worked on cancer related projects with Dr. Jeremy Warner and Dr. Ben Ho Park. Park, known for his work on breast cancer research at the Vanderbilt Ingram Cancer Center, is a leader in the field of gene mutations and currently serves as director of the Division of Hematology and Oncology at Vanderbilt University Medical Center.

“I really like understanding the genetic basis of disease. Oncology really interests me because of the pathophysiology, how the disease is caused based on certain genes that mutate. That, and the molecular signaling pathways that undergo each step. Even though there is a lot of noise going on, a lot of what we know about cancer can be ascribed to certain genes. That’s just incredible,” Yang said. “Oncology is a field in which you feel like you’re helping patients live longer lives and live better lives. I think that’s what attracts me about the field.”

He gained much exposure to oncology during his gap year working at the Vanderbilt Ingram Cancer Center, but Yang remains open to exploring other specialties while at VUSM. After all, oncology remains interdisciplinary.

“There’s pediatric oncology, surgical oncology, radiation oncology – all these different fields involved in the treatment of cancer. Being exposed to different specialties will help me inform all these subtypes of oncology medicine itself,” he said.

Though Yang’s work largely revolved around data sharing with cancer centers across the continent like Memorial Sloan Kettering Cancer Center in New York and the Princess Margaret Cancer Centre in Canada, he maintained attention to teaching and mentorship.

Park set an example by making himself available for one-on-one sessions to share advice and perspectives. Park also runs a molecular tumor board for undergraduates that Yang said inspired him to give back to the next generation.

“I think Dr. Park is an amazing teacher, not just with his medical students. He connects with undergraduates just to expose people to the interdisciplinary nature of cancer treatment…He presents a case and asks students what they think about how to treat it. That really exemplifies his desire to give back,” Yang said. “I would like to do that – do a little bit of everything in my career. I haven’t yet found my niche in teaching or researching or ‘doctoring,’ even, but I think I would want to do a lot of things to give back to the next generation.”

Yang hopes to take on mentorship roles during his time as a VUSM student. He sees an example in his Chapman College “Big,” Chen Bo Fang. The two text nearly every day, with Fang taking time to answer Yang’s questions about the first-year curriculum.

Fang said he couldn’t have asked for a better “Little.”

“James is doing solid work,” he said. “I am excited to help guide him through the year like my Big did for me least year. The mental challenges in medical school are sometimes worse than even the histology, so I think reassurance and hyping him up is my most important job. I couldn’t have asked for a better Little, and I think he might even cure cancer one day.”

Commonly, VUSM students hear that the early one-year curriculum is like drinking from a fire hydrant. Information flows rapidly and in great abundance during the Foundations of Medical Knowledge (FMK) phase, and with so much to process, students often need assistance from upperclassmen in determining on what information they should focus. Yang hopes to offer up his perspectives as a student teacher during his third and fourth years, following in the footsteps of older students who have guided him.

“I really want to share what they need to know and help them synthesize,” he said. “Like, ‘Here’s the bare bones, build upon this.’ Having someone tell you that really is helpful…You are pelted with so much information, and you have to sort through it yourself to find what you need to know. Having someone who has been through the process and knows how to guide you is super helpful and something I really want to do for the next classes.” 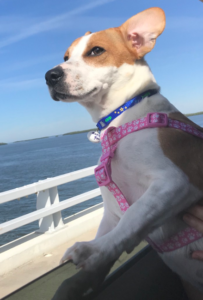 As for now, Yang remains content to study and spend time with Sadie. During his undergraduate years, he served as a board member of the Vanderbilt Protecting Animal Welfare Society (VPAWS), developing a desire to foster animal service as well. He credits his family with helping him take care of Sadie, respecting her as if she were one of his future patients. His parents call her their first grandchild.

From time to time, Yang brings Sadie to campus where she enjoys scratches and attention from student passersby and those world-renowned faculty members. She doesn’t mind waiting for him to come home other days, perhaps realizing the work and influence her human has on campus.

“Being around so many incredible people and getting to know them is important at any university in the nation,” Yang said. “There’s always hidden gems.”

And he, like Sadie, knows how to sniff them out.